— Sharpton planning DC rally for Aug. 28 anniversary of MLK's “I Have A Dream” speech 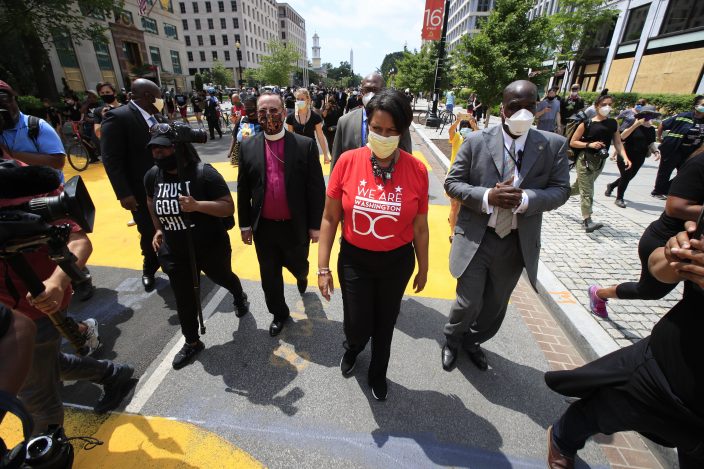 District of Columbia Mayor Muriel Bowser walks on the street leading to the White House after the words Black Lives Matter were painted in enormous bright yellow letters on the street by city workers and activists Friday, June 5, 2020, in Washington. (AP PhotoManuel Balce Ceneta)

— Minneapolis-St. Paul curfew over as troopers, National Guard to be sent home

— Seattle mayor bans police use of a type of tear gas for 30 days.

WASHINGTON -- Authorities in the nation’s capital are expecting Saturday to be the largest demonstration against police brutality in the city since the killing of George Floyd in Minneapolis.

Washington has featured daily protests for the past week and they have largely been peaceful, with people marching back and forth from the White House to the Capitol and the Lincoln Memorial.

Those numbers are expected to swell. Army Secretary Ryan McCarthy told reporters Friday that local officials were projecting between 100,000 and 200,000 protesters.

Metropolitan Police Department Chief Peter Newsham wouldn’t commit to a number but predicted it would be smaller than the 1 million people who attended the Women’s March in 2017.

It comes as authorities have sought to reduce tensions by having National Guard troops not carry weapons.

There were zero arrests during demonstrations on Thursday and Friday and D.C. Mayor Muriel Bowser canceled the curfew that had been in place since Monday. She said she will decide on Saturday morning if it will be reinstated.

A number of D.C. churches and theaters have said they will open their lobbies so people can cool off.

Rev. Al Sharpton said the Washington rally he announced this week was being planned for Aug. 28, the anniversary of the day MLK gave his “I Have a Dream” speech.

He said the August event would be a way of maintaining momentum as the legal process against the men charged in Floyd’s death is underway.

“It’s going to be months, if not a year before you even go to trial. So you can’t let this peter out ... otherwise you’ll end up in a year and people will go on to another story, and you will not have the public notice and pressure that you need.”

He said, “One of the things King’s dream was about was voting rights and gives us like 90 days before the election and a great emphasis on that, which you’re going to, in order to change laws, you’ve got to impact lawmakers and they get elected in November. ... Otherwise it’s for nothing.”

MINNEAPOLIS — Residents of Minneapolis and St. Paul were no longer under a curfew Friday night and the state is planning to start sending state troopers and National Guard members back home.

Minneapolis and St. Paul saw violent protests and store break-ins late last week following George Floyd’s death after being arrested by Minneapolis police. The city has seen peaceful protests for nearly a week, including some 1,000 protesters in St. Paul on Friday and hundreds more near U.S. Bank Stadium in Minneapolis.

Floyd, a handcuffed black man, died after a white police officer pressed his knee against his neck, ignoring his “I can’t breathe” cries even after Floyd eventually grew still. Bystander video sparked outrage over Floyd’s death and protests, some violent, that spread across the U.S. and beyond.

PHOENIX -- The family of an unarmed man shot and killed by an Arizona state trooper the same day George Floyd died want a federal investigation.

Dion Johnson’s mother, Erma, said Friday she has not heard from Phoenix Police, who are overseeing the investigation of the Memorial Day shooting. Family members expressed growing frustration that the trooper, who is on paid administrative leave, has not been identified to them.

The family is particularly bothered that Johnson, 28, was deprived of emergency medical aid for several minutes after he was shot and cuffed.

SEATTLE — Seattle's mayor has banned the police use of one type of tear gas as protests continue over the killing of George Floyd.

Mayor Jenny Durkan said at a news conference Friday that the ban on CS gas would last for 30 days.

Local health officials had also expressed concerns over the use of the gas and other respiratory irritants based on the potential to increase spread of the coronavirus.

The groups said the move would build public trust and should remain in place until the department adopts policies and training for use of the chemical agent.

Follow more AP stories on the George Floyd protests and reaction at https://apnews.com/GeorgeFloyd

The Latest: Atlanta officer fired after shooting of Brooks

The Latest: Columbus statue in Camden, NJ latest taken down