The British government faced criticism Saturday for another sudden change in its advice on face coverings that has left those running hospitals in England scrambling to work out how they will be able to meet the new requirements.

On Friday, as the World Health Organization broadened its recommendations for the use of masks, Health Secretary Matt Hancock said all hospital staff in England will have to wear surgical face masks from June 15 while visitors and outpatients will need to don some sort of face covering.

His announcement came a day after the government said face coverings, which can be made from any fabric, would be mandatory on public transport in England, from the same date to coincide with the planned reopening of nonessential shops such as department stores and electronic retailers. 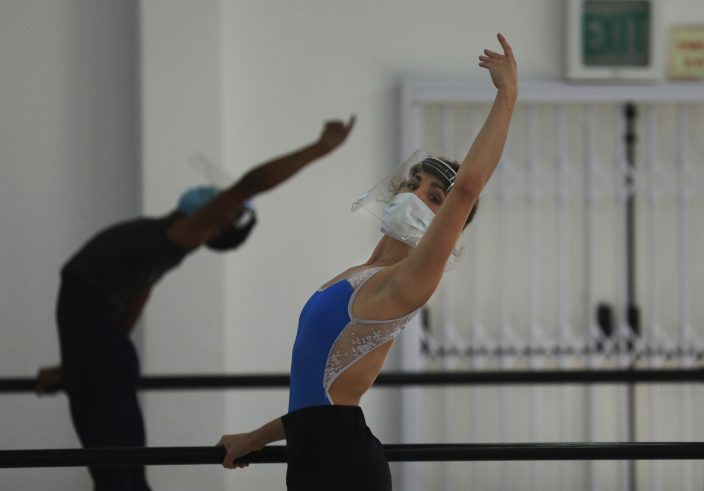 Cape Town City Ballet company dancer Olivia Parfitt, wearing a face mask and shield as she does exercises when the company returned for their first day back at work after more than two months in lockdown in Cape Town, South Africa, Friday, June 5, 2020. The dancers have been training at home due to strict lockdown regulations that have been implemented in a bid to prevent the spread of coronavirus. (AP PhotoNardus Engelbrecht)

The government, which notably did not recommend their use at the height of the pandemic, now says face coverings can provide some limited protection to others and help people avoid unknowingly spreading the virus.

The change in advice echoed developments elsewhere in Europe, where the guidance through the pandemic has often been confused and contradictory.

On Friday, the WHO said it is now advising that in areas where the virus is spreading, people should wear fabric masks when social distancing is not possible, such as on public transport and in shops. 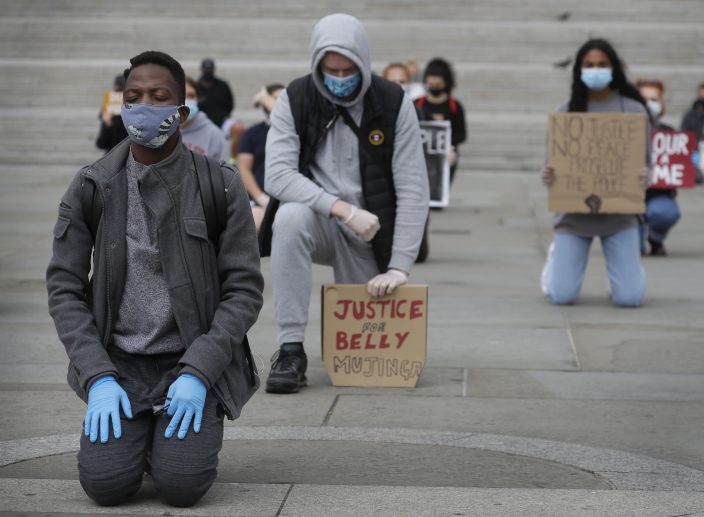 Demonstrators kneel in Trafalgar Square in London, Friday, June 5, 2020, to protest against the recent killing of George Floyd by police officers in Minneapolis, USA, that has led to protests in many countries and across the US. A US police officer has been charged with the death of George Floyd. (AP PhotoKirsty Wigglesworth)

Chris Hopson, chief executive of NHS Providers, which represents NHS organizations including hospitals, said the British government appeared to be making last-minute decisions “on the hoof" that seem “overly influenced” by political considerations.

“I think it’s the latest in a long line of announcements that have had a major impact on the way the NHS operates, in which those frontline organisations feel they have been left completely in the dark and they are then expected to make significant and complex operational changes either immediately or with very little notice," he told the BBC.

His criticism was echoed by the British Medical Association, which warned there was “little detail” on how the policy would be implemented, where the masks would come from or how outpatients and visitors would be given them. 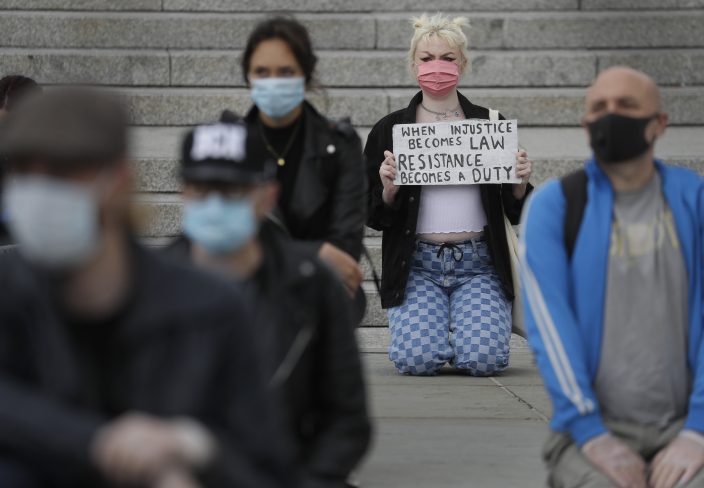 Demonstrators kneel in Trafalgar Square in London, Friday, June 5, 2020, to protest against the recent killing of George Floyd by police officers in Minneapolis, USA, that has led to protests in many countries and across the US. A US police officer has been charged with the death of George Floyd. (AP PhotoKirsty Wigglesworth)

While acknowledging that face coverings will play an important role in the next stage of the pandemic, the BMA's consultants committee chair Dr. Rob Harwood pointed to the consistent lack of personal protective equipment through the pandemic, which has seen more than 40,000 people die in the U.K. across all settings, including hospitals and care homes — the second-highest figure in the world.

“It is absolutely crucial that the government ensures there are enough supplies of face masks for staff, and adequate provision of face coverings for outpatients and the public by June 15,” he said.

The Department of Health and Social Care said NHS England, which oversees budget and planning issues, had been informed and that hospitals have all of next week to implement the changes. 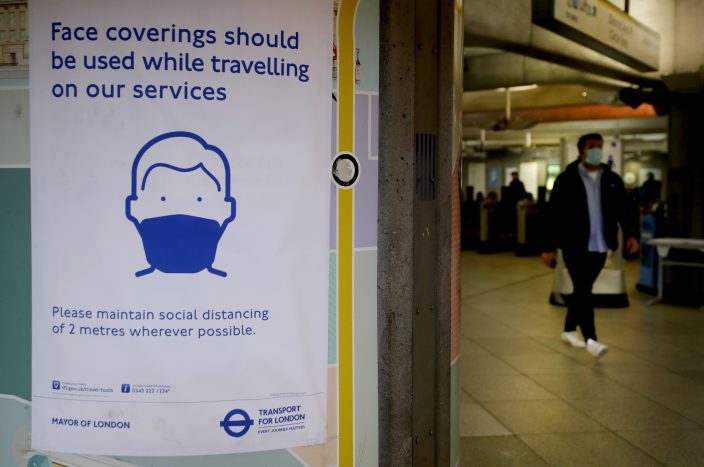 Britain hasn't been the only country in Europe grappling with the merits of face coverings, unlike many countries in Asia where people are used to wearing masks.

In Germany, the federal government changed its message in April after the country's 16 states made wearing basic fabric masks — also known in German as “mouth-nose-covers” or “everyday masks” — compulsory on public transport, in stores and public buildings such as libraries and local government offices. They have now become ubiquitous, as has the debate over how to deal with refuseniks.

And in Italy, where the pandemic in Europe took root, the public health messaging over masks has been mixed between regional and national authorities and seemingly more conditioned on the fact that during the peak of the outbreak, they were exceedingly hard to find.

Masks are now compulsory on public transport and in closed public spaces, such as stores and public transport. At restaurants customers are supposed to put them on, for example, if they get up from the table to use the restroom. And even though they are not required by law nationwide, most Italians are wearing them outdoors.

Frank Jordans in Berlin and Nicole Winfield in Rome contributed to this report.

Naked men and drunks: England assesses the reopening of pubs

Pubs and restaurants reopen in England as lockdown eased

UK scrapping quarantine for many visitors, but not from US

UK to end quarantine for travelers from 'low-risk' countries