Taking the measure of these days in the nation's capital, President Donald Trump exclaimed: “Washington, D.C., was the safest place on earth last night!”

Such alternate realities pervaded the world described by Trump and his team over the past week. 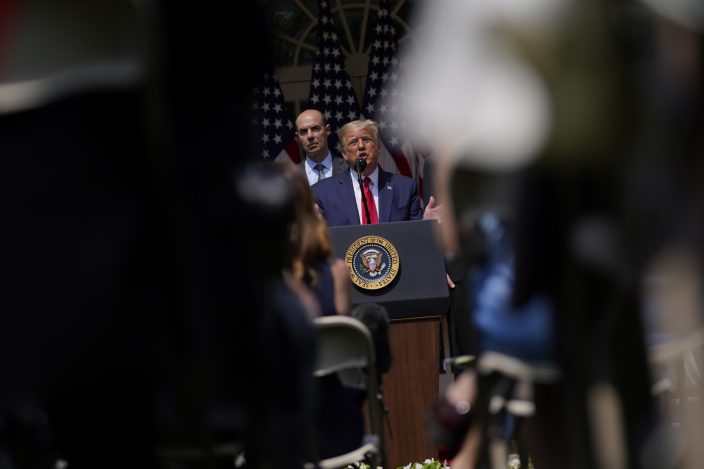 FILE- In this June 5, 2020, file photo President Donald Trump speaks during a news conference in the Rose Garden of the White House in Washington. (AP PhotoEvan Vucci, File)

Trump and aides denied that authorities in Washington used tear gas against protesters, who fled from chemical clouds that looked like tear gas, stung eyes like it and met the dictionary definition of it.

On a week of unrest so remarkable it overshadowed the pandemic and its still-mounting death toll, Trump boasted baselessly about diagnostic testing for the virus and problematically about black economic progress. When “Mad Dog Mattis” snapped at him, Trump falsely claimed to have fired him as defense secretary and to have given him that nickname. 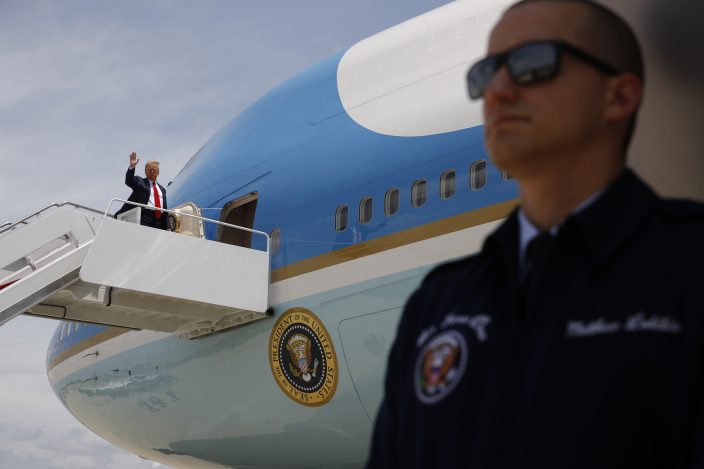 WHITE HOUSE: “Antifa and professional anarchists are invading our communities, staging bricks and weapons to instigate violence. These are acts of domestic terror.” — tweet Wednesday, with a video showing collections of bricks and stones as if stockpiled for attacks. 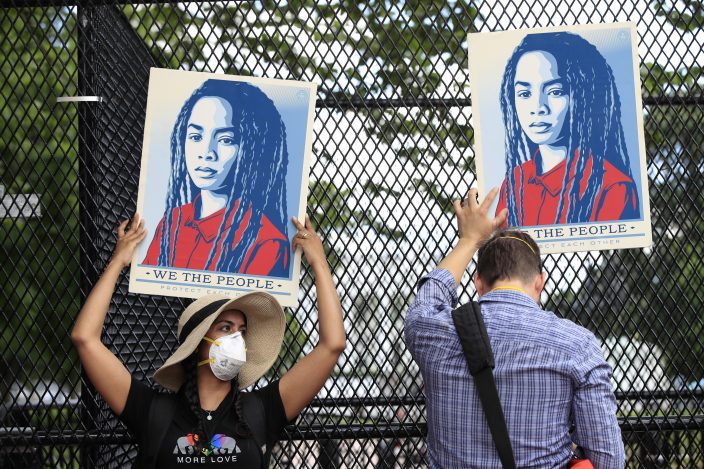 Demonstrators protest Friday, June 5, 2020, near the White House in Washington, over the death of George Floyd, a black man who was in police custody in Minneapolis. Floyd died after being restrained by Minneapolis police officers. (AP PhotoManuel Balce Ceneta)

THE FACTS: The tweet's evidence of malfeasance was bogus.

The video contained multiple clips showing brick or stone for construction projects and the like, not for a nefarious plot. One clip captured rocks encased in wire frames. Those are actually a protective barrier outside Chabad of Sherman Oaks, a synagogue on Ventura Boulevard in Los Angeles, to stop vehicles from ramming the building.

“They’ve been there for about a year,” Rabbi Mendel Lipskier of the synagogue told The Associated Press. “THESE ARE SECURITY BARRIERS,” the synagogue said in a statement reassuring neighbors and friends. 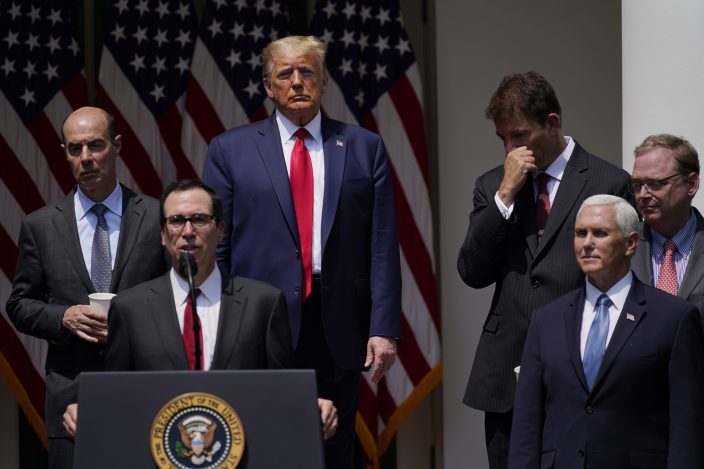 On Monday, posts had circulated on social media with photos of that gabion wall, falsely describing the stones as being left on Ventura Boulevard “for the next round of Antifa riots” and saying such “drop offs” were being repeated around the country.

That conspiracy theory fed into the White House tweet two days later as Trump and others brushed aside the peaceful nature of most of the protesting, highlighted the violence and portrayed the unrest as overwhelmingly the work of radicals. The White House later deleted the tweet and video without explanation. FILE - In this Monday, June 1, 2020, file photo, President Donald Trump returns to the White House in Washington. Trump is traveling to Maine on Friday, June 5, 2020, to visit a company that makes specialized swabs for coronavirus testing. (AP PhotoPatrick Semansky, File)

TRUMP: “They didn’t use tear gas." — Fox News Radio on Wednesday, referring to the previous night's demonstrations outside the White House.

KAYLEIGH McENANY, White House press secretary: "No tear gas was used. ... no one was tear-gassed. Let me make that clear." — briefing Wednesday.

THE FACTS: People were tear-gassed. 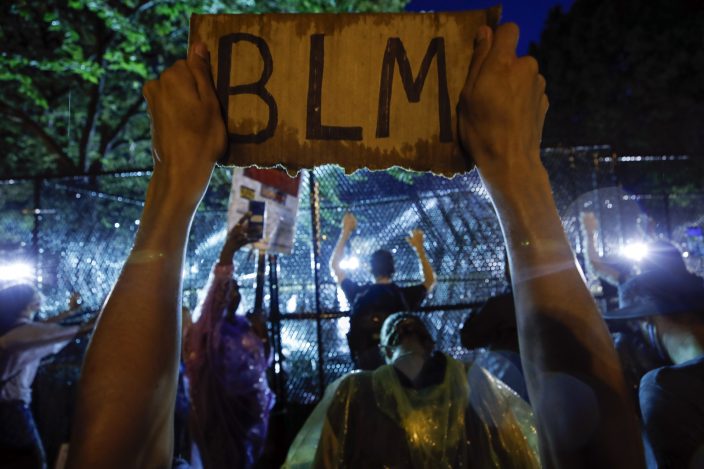 Demonstrators protest Thursday, June 4, 2020, near the White House in Washington, over the death of George Floyd, a black man who was in police custody in Minneapolis. Floyd died after being restrained by Minneapolis police officers. (AP PhotoAlex Brandon)

People scattered in the stinging fog, coughing and gagging, some with eyes red and streaming.

“Tear gas is anything that makes you cry,” said Dr. Lynn Goldman, dean of the George Washington University Milken Institute School of Public Health, speaking of chemicals used in crowd dispersal. “Pepper spray is a tear gas. But there are all kinds of other ones, too.”

Dr. Sven-Eric Jordt, who researches tear gas agents and chemical exposure injuries at the Duke University School of Medicine, said newer compounds, categorized as OC agents, might or might not fit a traditional scientific definition of tear gas but are as potent and have the same effects. CS and CN are classic categories of tear gasses.

WUSA9, a CBS affiliate in Washington, reported that its journalists found spent OC and CS canisters on the street immediately after authorities cleared the protest; one canister was still warm.

The crackdown on peaceful as well as violent protesters, the injuries to police who were attacked, the fortifications around the White House, the phalanx lining the steps of the Lincoln Memorial, and the threat of looting and vandalism in neighborhoods well away from the militarized scene all spoke to the dangers of the night.

More than half a dozen federal agencies joined in the effort to bring order. Among them, the U.S. Park Police said Tuesday that 51 of its members were injured over the previous four days of demonstrations.

During that time, Trump had warned that anyone getting past White House security would face “the most vicious dogs, and the most ominous weapons." At one point early in the confrontations, Secret Service agents spirited Trump to a White House bunker.

TRUMP, on the economy before the pandemic: “We had the best numbers for African Americans on employment and unemployment in history ... best everything.” — Fox News interview Wednesday

THE FACTS: True on unemployment. Not true by a long shot on “everything” in the economy.

Black unemployment reached a record low during the Trump administration, 5.4% in August, as the longest economic expansion in history pressed ahead.

Most of the progress came when Barack Obama was president: Black unemployment dropped from a recession high of 16.8% in March 2010 to 7.8% in January 2017. Improvement continued under Trump until the pandemic. Black unemployment reached 16.8% in May, compared with 13.3% for the overall population.

Not all economic measures improved for African Americans under Trump before the pandemic. A black household earned median income of $41,361 in 2018, the latest data available. That’s below a 2000 peak of $43,380, according to the Census Bureau.

More broadly, there were multiple signs before the pandemic that the racial wealth gap had been worsening.

TRUMP: “Probably the only thing Barack Obama & I have in common is that we both had the honor of firing Jim Mattis, the world’s most overrated General.” — tweet Wednesday.

THE FACTS: No, what Trump and Obama have in common is that Mattis resigned under them. They did not fire him.

As Obama’s head of Central Command and Trump’s defense secretary, Mattis disagreed with elements of administration policy. This past week he also voiced anger over what he regards as Trump’s divisive, immature leadership.

The retired four-star Marine general announced in December 2018 that he would step down in as defense secretary in two months.“General Jim Mattis will be retiring, with distinction,” Trump tweeted then, praising his tenure. Then Trump flipped his tone, cut short Mattis’ remaining time and started claiming that he’d fired him.

THE FACTS: No, he didn’t change Mattis’ nickname to Mad Dog. Mattis had been called that for more than a decade before joining the Trump administration.

He was also known by his military call sign Chaos when he was a Marine colonel. Mattis joked that it stood for “Colonel Has An Outstanding Solution.”

THE FACTS: U.S. testing has been far from “incredible.” It was a failure in the crucial early weeks, U.S. officials acknowledged, meaning missed opportunity to limit the spread of the virus before infection and death surged.

Brett Giroir, the lead federal official on testing, said Thursday that the U.S. conducted about 12 million tests in May, falling 900,000 short of the administration’s target for the month.

Trump has repeatedly overstated the availability of U.S. testing, falsely declaring in March, in the midst of dire shortages, “Anybody who wants a test, can get a test.”

Now, the availability of tests varies widely. Some governors and local officials say they have more tests available than people who want them. Others say they can’t meet the demand. That’s the case at the Department of Veterans Affairs, for example.

AP FACT CHECK: In time of trauma, Trumps congratulates self