SpaceX’s debut astronaut launch is the biggest, most visible opening shot yet in NASA’s grand plan for commercializing Earth’s backyard.

Amateur astronauts, private space stations, flying factories, out-of-this-world movie sets — this is the future the space agency is striving to shape as it eases out of low-Earth orbit and aims for the moon and Mars.

It doesn’t quite reach the fantasized heights of George Jetson and Iron Man, but still promises plenty of thrills. 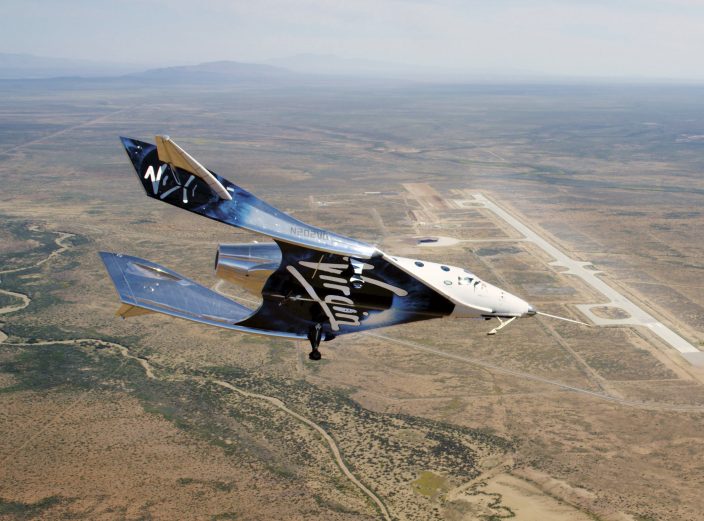 FILE - In this Friday, May 1, 2020 photo provided by Virgin Galactic, the SpaceshipTwo Unity flies free in New Mexico airspace for the first time. Founder Richard Branson is the only one of the three billionaires planning to launch himself _ from New Mexico, hopefully, by year’s end _ before putting customers aboard. (Virgin Galactic via AP)

“I see this as a real possibility,” she said. “You’re going to see low-Earth orbit open up.” FILE - In this Thursday, May 9, 2019 file phto, Jeff Bezos speaks in front of a model of Blue Origin's Blue Moon lunar lander in Washington. In 2020, NASA Administrator Jim Bridenstine said space is currently a $400 billion market, including satellites. Opening up spaceflight to paying customers, he said, could expand the market to $1 trillion. (AP PhotoPatrick Semansky)

The road to get there has never been so crowded, with Elon Musk’s SpaceX company leading the pack.

A week ago, SpaceX became the first private company to send people into orbit, something accomplished by only three countries in nearly 60 years. The flight to the International Space Station returned astronaut launches to the U.S. after nine long years.

“This is hopefully the first step on a journey toward a civilization on Mars,” an emotional Musk told journalists following liftoff. 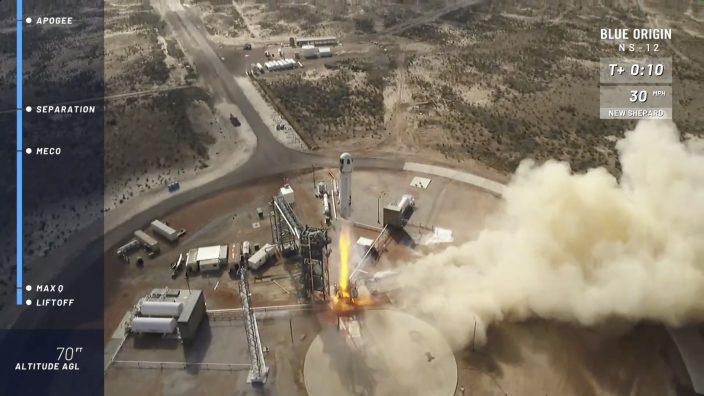 In this Dec. 11, 2019 image from video provided by Blue Origin, the New Shepard rocket takes off near Van Horn, Texas, on the sixth successful launch and landing of the same rocket. (Blue Origin via AP)

Closer in time and space is SpaceX's involvement in a plan to launch Tom Cruise to the space station to shoot a movie in another year or so. NASA Administrator Jim Bridenstine embraces the idea. He wants NASA to be just one of many customers in this new space-traveling era, where private companies own and fly their own spaceships and sell empty seats.

“Kind of a changing of the guard in how we're going to do human spaceflight in the future,” said Mike Suffredini, a former NASA station program manager who now leads Houston's Axiom Space company.

Axiom has partnered with SpaceX to launch three customers to the space station in fall 2021. An experienced astronaut will accompany them, serving as the commander-slash-tour guide. Two private flights a year are planned, using completely automated capsules belonging to SpaceX or Boeing, NASA's two commercial crew providers. 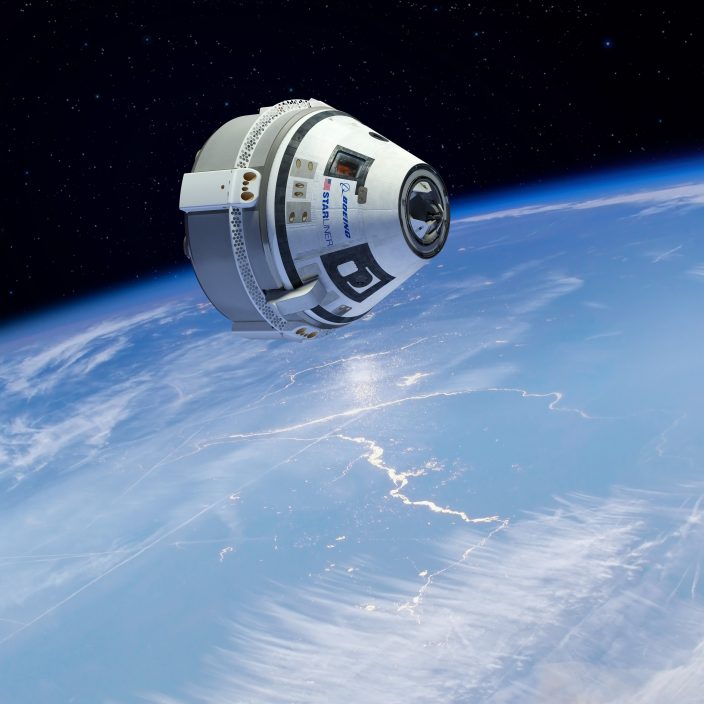 The ticket price — which includes 15 weeks of training and more than a week at the space station — is about $55 million. Besides the three signed up, others have expressed serious interest, Suffredini said.

Since last weekend's successful launch, “everybody’s starting to wonder where their place in line is,” Suffredini told The Associated Press on Thursday. "That's a really, really cool position to be in now.”

Space Adventures Inc. of Vienna, Virginia, also has teamed up with SpaceX. Planned for late next year, this five-day-or-so mission would skip the space station and instead orbit two to three times higher for more sweeping views of Earth. The cost: around $35 million. It's also advertising rides to the space station via Boeing Starliner and Russian Soyuz capsules. 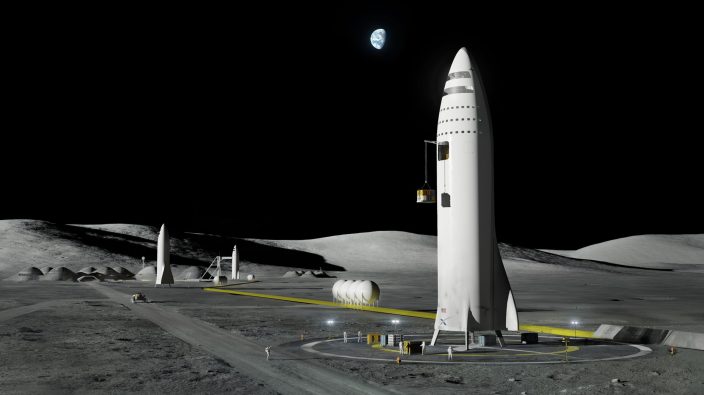 FILE - This artist's rendering made available by Elon Musk on Friday, Sept. 29, 2017 shows SpaceX's mega-rocket design on the Earth's moon. Amazon's Jeff Bezos and Virgin Galactic's Richard Branson favor going back to the moon before Mars. Musk also is rooting for the moon, although his heart's on Mars. (SpaceX via AP, File)

Jeff Bezos’ Blue Origin and Richard Branson’s Virgin Galactic are taking it slower and lower with tourist flights. These space-skimming, up-and-down flights will last minutes, not days, and cost a lot less. Hundreds already have reservations with Virgin Galactic.

Branson is the only one of the three billionaires planning to launch himself before putting customers aboard at $250,000 a pop. His winged rocketship is designed to drop from a customized plane flying over New Mexico.

Blue Origin's customers will launch on rockets from West Texas; the capsules sport wall-to-ceiling windows, the largest ever built for a spacecraft. 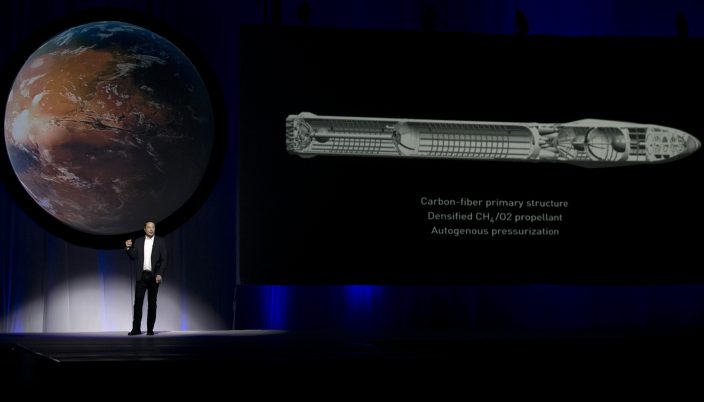 FILE - In this Tuesday, Sept. 27, 2016 file photo, SpaceX founder Elon Musk speaks during the 67th International Astronautical Congress in Guadalajara, Mexico. In a receptive audience full of space buffs, Musk said he envisions 1,000 passenger ships flying en masse to Mars, 'Battlestar Galactica' style. He calls it the Mars Colonial fleet, and he says it could become reality within a century. Musk's goal is to establish a full-fledged city on Mars and thereby make humans a multi-planetary species. (AP PhotoRefugio Ruiz)

It's not just rocket rides that have companies salivating.

Beginning in 2024, Axiom plans to build its own addition to the 260-mile-high (420-kilometer-high) outpost to accommodate its private astronauts. The segment would later be detached and turned into its own free-flying abode.

Space Adventures is marketing flights to the moon — not to land, but buzz it in Russian spacecraft. 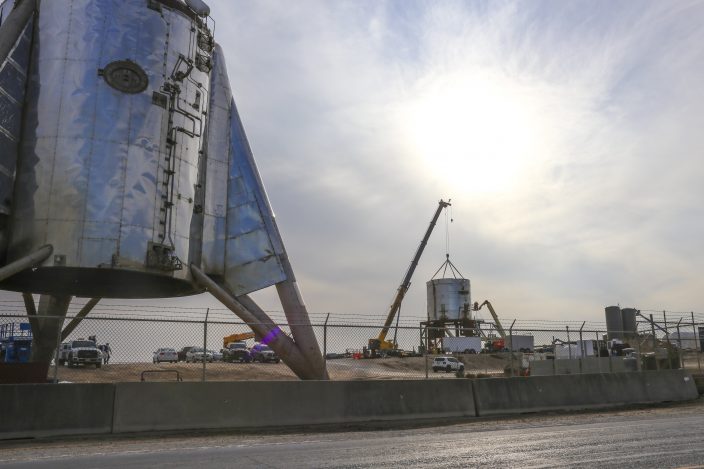 FILE - In this Thursday, Dec. 12, 2019 file photo, crews work around components of the Starship Mk 1 prototype at the SpaceX facility outside Brownsville, Texas. SpaceX’s debut astronaut launch in 2020 is the biggest, most visible opening shot yet in NASA’s grand plan for commercializing Earth’s backyard. (Denise CatheyThe Brownsville Herald via AP)

The moon — considered the proving ground for the ultimate destination Mars — is where it's at these days. NASA is pushing to get astronauts back on the lunar surface by 2024 and establish a permanent base there.

Musk's company recently won contracts to haul cargo to the moon and develop a lunar lander for astronauts.

But the bigger draw for Musk is Mars. It’s why he founded SpaceX 18 years ago — and why he keeps pushing the space envelope. FILE - In this Wednesday, Jan. 16, 2013 file photo, Bigelow Aerospace founder and president Robert Bigelow, listens to questions from members of the media during a news conference in Las Vegas. Bigelow spoke about the company's new contract to provide NASA with a habitat module for the International Space Station. In the background is a mockup of a BA 330 module, similar in function to what the new Bigelow Expandable Activity Module will be. (AP PhotoJulie Jacobson)

“I cannot emphasize this enough. This is the thing that we need to do. We must make life sustainably multi planetary. It’s not one planet to the exclusion of another, but to extend life beyond Earth," Musk said after last weekend's launch.

“I call upon the public to support this goal,” he added, beckoning to the NASA TV cameras.

To fulfill that vision, SpaceX is using its own money to develop a massive, bullet-shaped steel spacecraft called Starship at the bottom of Texas. Prototypes repeatedly have ruptured and exploded on the test pad, most recently on the eve of the company’s astronaut flight from Florida’s Kennedy Space Center. 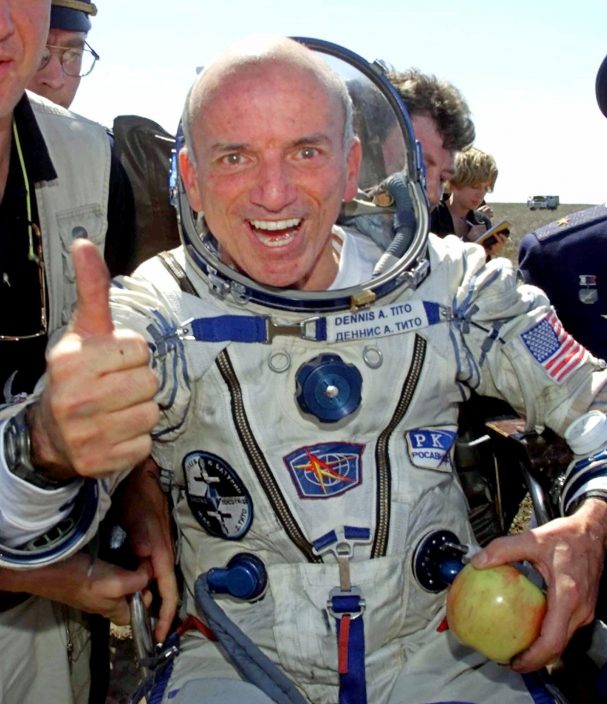 NASA's Bridenstine said space is currently a $400 billion market, including satellites. Opening up spaceflight to paying customers, he said, could expand the market to $1 trillion.

The goal is to drive down launch costs and ramp up innovation, drawing in more people and more business. By NASA's count, 576 people have flown in space, with only the wealthy few footing their own bill.

The world’s first space tourist, California businessman Dennis Tito, paid a reported $20 million to the Russians to fly to the space station in 2001 — against NASA’s wishes. The Canadian founder of Cirque du Soleil, Guy Laliberte, shelled out $35 million for a Russian ticket in 2009. Space Adventures arranged both deals.

“It really is the billionaire boys’ club,” former space shuttle astronaut Leland Melvin said during last Saturday's launch broadcast. Once prices drop, he’d consider returning to space, but not without his dogs.

“They’re ready to go, need SpaceX suits for them,” he said.

Once lunar bases are established, the next step will be Mars in the 2030s, according to Bridenstine.

“Those are the kinds of things that inspire the next Elon Musk, the next Jeff Bezos, the next Sir Richard Branson. And that’s what we have to get back to as an agency,” he said.

SpaceX still has to get NASA astronauts Doug Hurley and Bob Behnken safely back to Earth this summer in its Dragon capsule. But the company already is looking ahead to the next astronaut crew. Crew mission director Benji Reed got a brief taste of this future as he wrapped up a chat with the astronauts Monday.

“Thank you for flying SpaceX,” he chimed.