An unexpectedly strong jobs report could further scramble an already uncertain picture for passing a fifth and possibly final coronavirus aid bill. The positive statistics are feeding the wait-and-see approach of the White House and its GOP allies in Congress.

Republicans say the numbers vindicate their decision to take a pause and assess the almost $3 trillion in assistance they already have approved. The White House was already showing little urgency about pursing another trillion-dollar response bill, much less the $3.5 trillion measure passed by the House last month, and prefers to concentrate on reopening the economy.

The coming weeks are expected to bring difficult negotiations over what the package should contain, just months before an election where the White House and control of Congress are at stake. 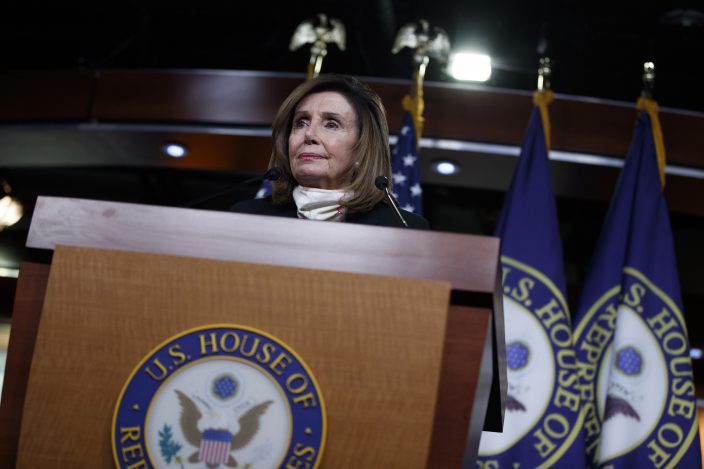 FILE - In this May 28, 2020, file photo House Speaker Nancy Pelosi of Calif., pauses as she speaks during a news conference on Capitol Hill in Washington. (AP PhotoCarolyn Kaster, File)

For lawmakers, tough decisions loom about how much money to allocate to states, how to extend unemployment benefits for millions of people and whether to create lawsuit protections for businesses and schools as they reopen during the pandemic.

Friday’s jobs report showed a 2.5 million gain instead of an expected loss of millions more, complicating prospects for the aid talks. Trump is difficult to gauge, but talks often of pursing public works spending and a payroll tax cut, which is a nonstarter on Capitol Hill.

“They are less than urgent, less than inclined for another package,” said Rep. Patrick McHenry, R-N.C., a GOP leader when his party was in the majority. “There is less urgency to go strike a hard deal — and this one would be a hard deal. Doesn’t mean it won’t happen, I just think the urgency is far lessened.”

Democrats looked at the jobs report and saw job losses for 600,000 public employees that are likely to worsen if Washington doesn’t help cash-starved state and local governments. Despite the positive jobs news, unemployment nationwide is at 13%, so the looming expiration of a supplemental $600 per week jobless benefit promises to provide a catalyst for action.

Top Democrats such as Speaker Nancy Pelosi of California and Senate Minority Leader Chuck Schumer of New York are united behind the $3.5 trillion “HEROES Act,” which contains party priorities such as jobless aid, another round of $1,200 checks and money for essential workers, local schools, colleges and people missing mortgages and rent payments.

Senate Majority Leader Mitch McConnell of Kentucky and other Republicans are opposed to the Democratic plan. But they are struggling with their own divisions, with more pragmatic lawmakers favoring aid to states and local governments and recognizing that additional jobless aid is inevitable if there is to be an agreement.

GOP Sens. Mitt Romney of Utah, Susan Collins of Maine and Cory Gardner of Colorado back a significant state aid package, and there’s strong support across Congress for help for smaller municipalities. But concerns about piling additional trillions of dollars onto the national debt have risen, and some Republicans believe Congress has done enough.

McConnell has already said Republicans won’t extend the $600 per week supplemental unemployment benefit, which they say is taking away incentive for people to return to the job market. A recent Congressional Budget Office report estimated that 5 out of 6 people would earn more by continuing to receive the higher benefits than returning to work and that extending the benefit would harm the economy next year.

What is plain is that the enormous sense of urgency that produced the first four aid bills has faded, along with the freewheeling dynamic that inflated the price tags. That dynamic helped Democrats to win gains in the $2 trillion CARES Act in March that they might not have gotten through a more deliberate process.

“Unlike the CARES Act, where we really did need to act in a matter of days, here we have a little bit of luxury of time, but that time is not indefinite,” said Neil Bradley, chief policy officer at the U.S Chamber of Commerce. “We don’t have months.”

Now, Republicans have set a goal of keeping the cost of the next bill below $1 trillion. That's going to be a hard sell for Pelosi, who devoted almost $1 trillion just to states and localities.

Supporters of a deal had hoped to reach an agreement this month, but acknowledge the annual August recess is now looking more like the informal deadline. For starters, leadership aides in both parties acknowledge there have been virtually no bipartisan talks so far, with Pelosi and McConnell communicating through their public statements.

“Future efforts must be laser-focused on helping schools reopen safely in the fall, helping American workers continue to get back on the job, and helping employers reopen and grow,” McConnell said Friday.

McConnell: 'No stigma' in wearing masks for virus

GOP wary as Trump pushes new round of stimulus checks