David Harris Jr., a nephew of humanitarian and tennis legend Arthur Ashe, tried for decades to get a street named after his uncle in Richmond, the hometown that once denied Ashe access to segregated public tennis courts.

Finally, in 2019, the City Council approved the renaming over the objections of some city residents. So it was gratifying, Harris said, to see Virginia's governor announce plans to remove an iconic statue of Confederate Gen. Robert E. Lee after days of protests over the death of George Floyd.

“My hat is off to them for getting this done," Harris said Friday. “It took me 25 years to get the street name changed. I commend these young folks for getting these guys to see it within a week and a half.” 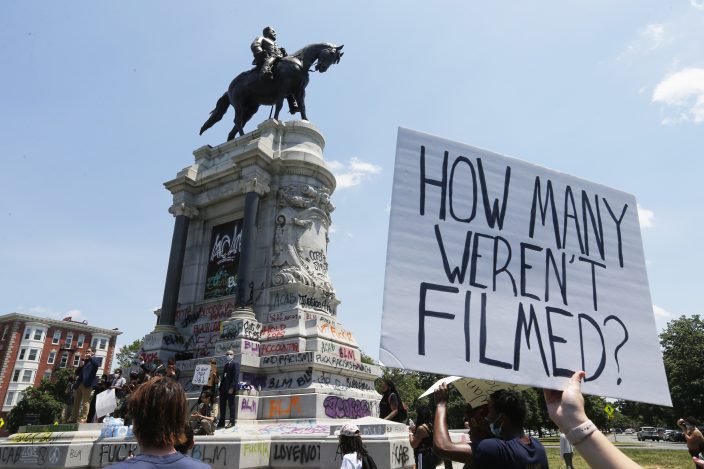 In recent days, amid an extraordinary outpouring of grief over Floyd's death, Virginia Gov. Ralph Northam has pledged to remove the Lee statue, while city leaders have also committed to taking down the other four Confederate memorials along Richmond's prestigious Monument Avenue.

The changes amount to a reshaping of how one of America's most historic cities tells its story in its public spaces — and a rethinking of whom it glorifies.

“It’s been a long time coming. ... We’ve tried marches, petitions, protests, going to city council" to get the Confederate monuments removed, said Phil Wilayto, a longtime community organizer and activist with the Virginia Defenders for Freedom, Justice & Equality. “And it took what is in effect a mass uprising of the community to say these things are not acceptable.” 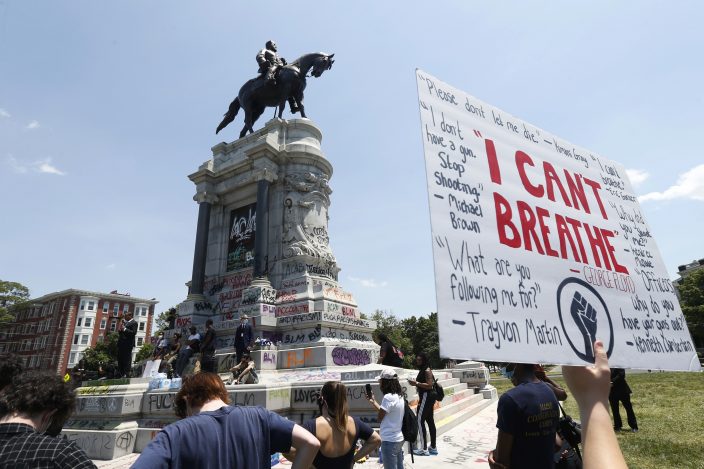 Republican lawmakers, Confederate heritage groups and a Monument Avenue preservation group have criticized the decisions. Many have equated the monuments’ removal to erasing history.

“Attempts to eradicate instead of contextualizing history invariably fail,” Senate GOP leaders said in a statement.

Floyd, a black man in Minneapolis, died after a white officer jammed his knee into his neck for nearly nine minutes as other officers watched. Video captured Floyd’s arrest and final moments, and his death has sparked protests around the world that demonstrators have vowed to turn into a sustained movement focused on addressing racial injustice. The Richmond monument decisions, part of a wave of Confederate monument removals around the country, has stunned some observers in this former capital of the Confederacy, a place where even three years ago many residents said they considered removing the statues impractical, or nearly impossible due to a state law that protected war memorials.

The new Democratic majority at the General Assembly rewrote that law earlier this year, an effort led by black women lawmakers. It will take effect July 1, giving Richmond and other localities around the state permission to do as they please. The Lee statue, meanwhile, was on state property.

“Yes, that statue has been there for a long time,” Northam said Thursday. “But it was wrong then, and it is wrong now. So we’re taking it down.” 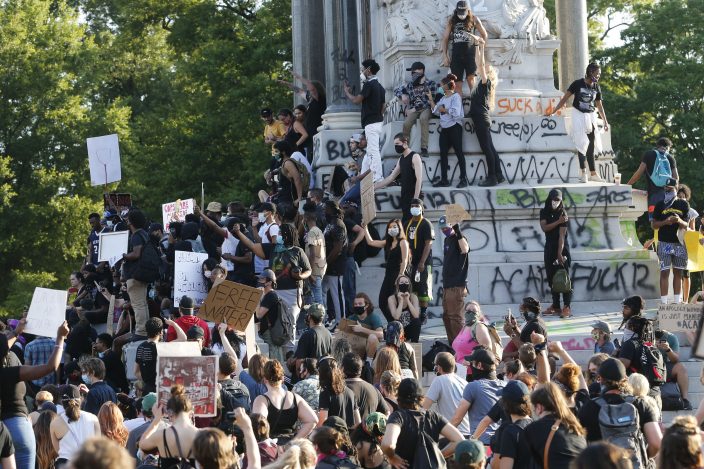 The idea to erect a monument to Lee originated “within hours” of his death, according to a National Register of Historic Places nomination form. Two rival campaigns to raise money for the memorial dragged on for more than 15 years, and the selected site was a gift of a prominent Richmond businessman, the documents show.

The statue was the first of five Confederate monuments to be erected on Richmond’s Monument Avenue. It was unveiled in May 1890, at a time when the Civil War and Reconstruction were long over, and Jim Crow racial segregation laws were on the rise.

The statue arrived in Richmond in pieces from France, where it was created. Thousands of Virginians used wagons to help pull the pieces for more than a mile to what was then an empty field. That field is now part of Monument Avenue, the city's grandest boulevard and one that's been visited over the years by dignitaries including then-British Prime Minister Winston Churchill and Britain's Queen Elizabeth. 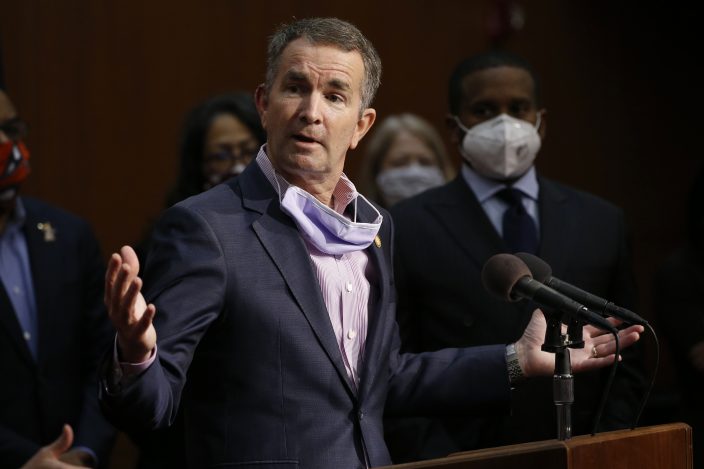 To white citizens in the late 19th century, the statue of Lee, a Civil War hero and native Virginian, was a cause for celebration. Some even saved pieces of the rope used to haul the statue as souvenirs.

But black citizens felt a deep-seated animosity toward the statue, seeing it as a glorification of slavery, the Civil War and their treatment as second-class citizens, said Julian Hayter, a historian and professor of leadership studies at the University of Richmond.

Today, the 21-foot (6-meter) bronze equestrian sculpture that shows the general in military attire sits atop a 40-foot (12-meter) pedestal on whose side is featured a single word: “Lee.” 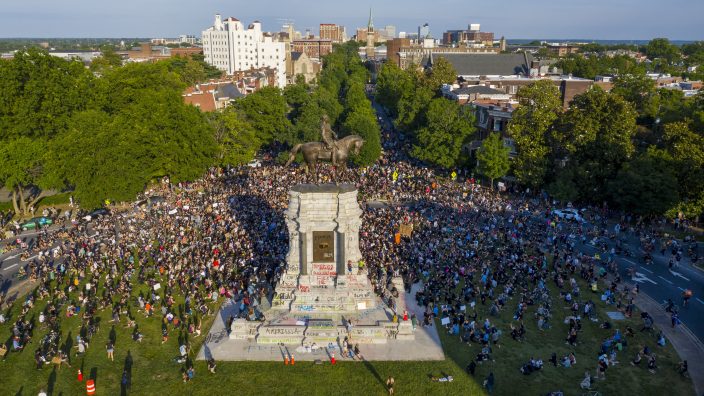 Northam emphasized the monument's enormous size in his remarks Thursday, saying that at six stories tall, it towers over homes, businesses and “everyone who lives in Virginia.”

“And when it’s the biggest thing around, it sends a clear message: ‘This is what we value the most.’ But that’s just not true anymore,” he said.

Joseph Rogers, a descendant of enslaved people and an organizer with the Defenders who spoke with AP this week from a rally at the Lee monument, said he felt he was witnessing history when he learned the statue would be removed.

He also said the moment felt like “a fulfillment of prophecy,” a reference to words written by the black editor of the Richmond Planet newspaper who covered the unveiling of the Lee memorial.

“(The black man) put up the Lee Monument, and should the time come, will be there to take it down,” John Mitchell Jr. wrote.

Richmond Mayor Levar Stoney announced this week that he and a city councilman would introduce an ordinance removing the statues, and the Richmond Times-Dispatch has reported the city council has unanimously affirmed support for such a move.

Dr. Fergie Reid, who grew up in segregated Richmond and in 1967 became the first African American elected to the Virginia General Assembly since Reconstruction, called the monuments' removal “long overdue.” But Reid, 95, said he thinks they still have historical value.

“I think they should go to a museum — just like the dinosaurs,” he said.