A 24-year-old St. Louis man has been charged with first-degree murder in the fatal shooting of a retired police captain who died on a night of violent protests while trying to protect his friend’s pawn shop, the city's prosecutor announced Sunday

Stephan Cannon was being held without bond on a first-degree murder charge in the death of David Dorn, 77, who was killed Tuesday on the sidewalk outside Lee’s Pawn and Jewelry. Dorn’s last moments were caught on video and apparently posted on Facebook Live, though the video has since been taken down.

Dorn's death came on a violent night in St. Louis, where four officers were shot, officers were pelted with rocks and fireworks, and 55 businesses were burglarized or damaged, including a convenience store that burned. 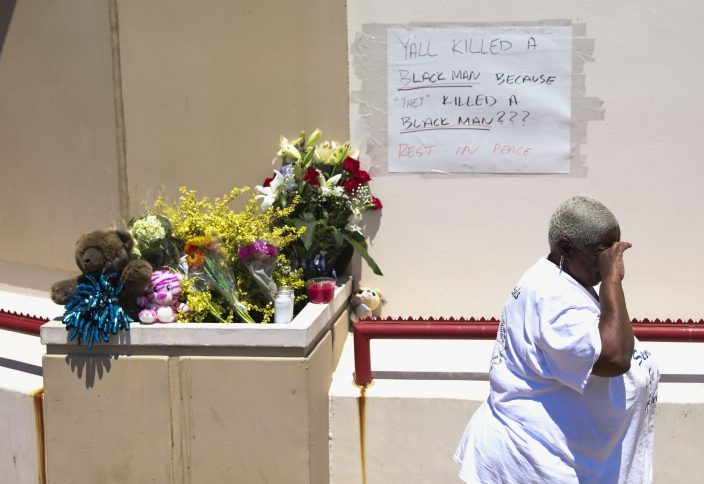 Diane Davis wipes away tears after bringing flowers Tuesday, June 2, 2020, to a memorial for David Dorn, a retired captain with the St. Louis Police Department, who was killed early Tuesday while working security for a pawn shop in St. Louis. Protests that began peacefully over the death of George Floyd turned violent in the St. Louis area, where four police officers were shot and wounded and a retired St. Louis police captain was killed by looters at a pawn shop, actions that the governor blamed on “criminals” and “thugs.” (Colter PetersonSt. Louis Post-Dispatch via AP)

The unrest came as cities across the U.S. have seen protests and violence since George Floyd died May 25 after a white Minneapolis officer pressed his knee into Floyd’s neck for several minutes, even after the handcuffed black man stopped moving and pleading for air.

According to a police probable cause statement, Cannon was among those seen on surveillance footage entering the store and then stealing several televisions, The St. Louis Post-Dispatch reported. Dorn, a friend of the pawn shop’s owner who was in the habit of checking on the business when alarms went off, arrived at the store. Cannon then walked toward the street corner with gun in his hand.

“At the time the shots were fired, (Cannon) was the only person standing at that corner,” the probable cause statement reads. “Multiple plumes of smoke” can be seen coming from where Cannon was standing, and shell casings were found on the spot, police said.

Cannon also faces several other charges including robbery and felon in possession of a firearm.

Telemedicine provider Teladoc to spend $18.5B on Livong ...

One of the nation’s biggest teleme ...

Survey: US companies cut back sharply on hiring in July