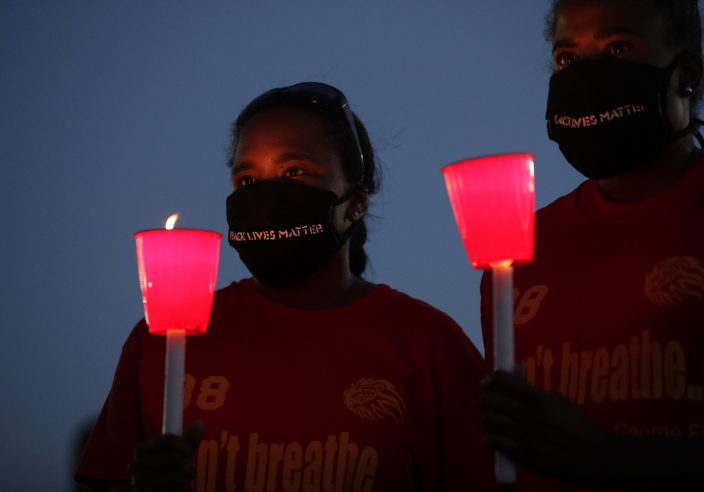 VIRUS OUTBREAK-YEMEN-HOUTHIS — An investigation by The Associated Press finds that the coronavirus pandemic is taking a deadly toll on the war-weary population of Yemen. The situation is exacerbated in the Houthi-controlled north where the rebels have suppressed information about the virus, severely punished those who speak out, enforced little mitigation measures, and promoted conspiracies and claims by the Houthi minister of health that their scientists are working on developing a cure for COVID-19 to present to the world. By Maggie Michael. SENT: 1,460 words, photos. 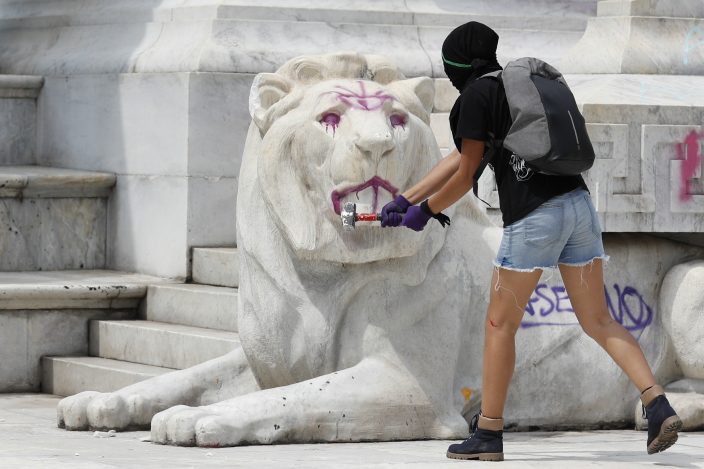 A woman hits a statue of a lion with a sledgehammer as protestors angry at the police attack the monument to Mexico's first indigenous president, Benito Juárez, during a march in which they also smashed storefronts and bus stops, in Mexico City, Monday, June 8, 2020. (AP PhotoRebecca Blackwell)

AMERICA PROTESTS — The black man whose death has inspired a worldwide reckoning over racial injustice will be buried in Houston, carried home in a horse-drawn carriage. George Floyd, who was 46 when he was killed, will be laid to rest next to his mother. On May 25, as a white Minneapolis officer pressed a knee on Floyd’s neck for several minutes, the dying man cried out for his mother. By Juan A. Lozano and Nomaan Merchant. SENT: 830 words, photos. With AMERICA PROTESTS-THE LATEST. 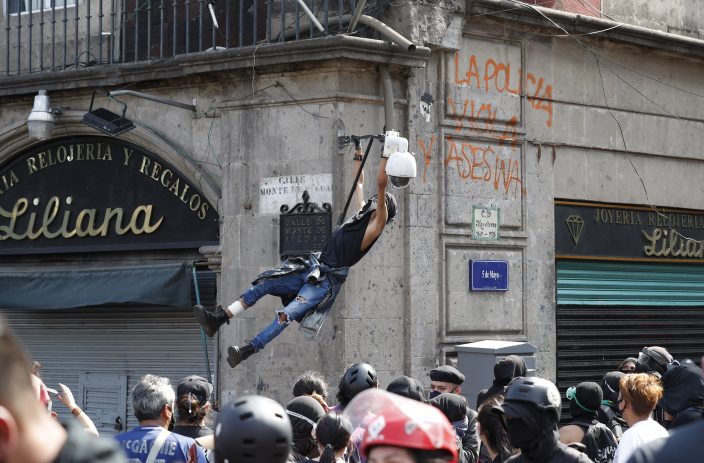 A youth tears down a surveillance camera during a march in downtown Mexico City, Monday, June 8, 2020. (AP PhotoRebecca Blackwell)

ELECTION 2020-DEFUND THE POLICE — Key Democrats, including presumptive presidential nominee Joe Biden, are rejecting liberal calls to “defund the police” as President Donald Trump and his allies point to the movement as a dangerous example of Democratic overreach. Supporters of the “defund the police” push say it’s a symbolic commitment to end systemic racism and shift policing priorities rather than an actual plan to eliminate law enforcement agencies. By Steve Peoples, Alan Fram and Jonathan Lemire. SENT: 990 words, photo. With POLICE REFORM-THINGS TO KNOW — A look at Democrats’ sweeping proposals to overhaul policing.

AMERICA PROTESTS-QUICK CHANGE — In the two weeks since George Floyd’s killing, police departments have banned chokeholds, Confederate monuments have fallen and officers have been arrested and charged amid large global protests against violence by police and racism. By Sudhin Thanawala. SENT: 750 words, photos. Also see MORE ON AMERICA PROTESTS below. 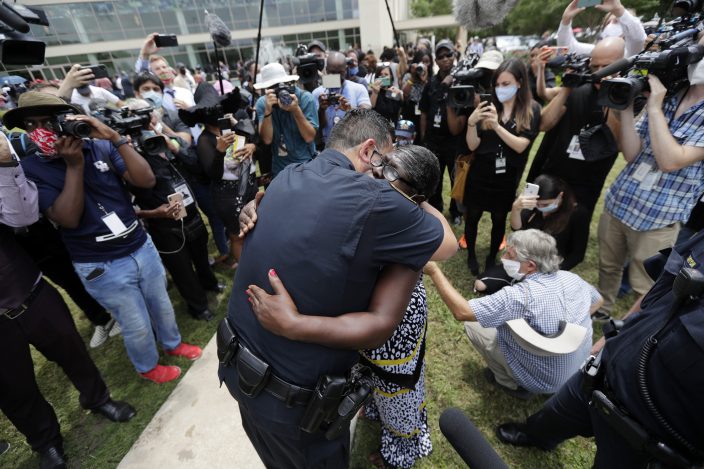 Houston police chief Art Acevedo and Charlene Davis embrace after Davis prayed for him as she stood in line at a public visitation for George Floyd at The Fountain of Praise church in Houston, Monday, June 8, 2020, in Houston.(AP PhotoEric Gay)

VIRUS-OUTBREAK — As many countries gingerly start lifting their lockdown measures, experts worry that a further surge of the coronavirus in under-developed regions with shaky health systems could undermine efforts to halt the pandemic, and they say more realistic options are needed. By Maria Cheng and Mauricio Savarese. SENT: 1,220 words, photos. With VIRUS OUTBREAK-THE LATEST.

VIRUS-OUTBREAK-CHINA-GLOBAL-DONOR — As the coronavirus spread, the world’s richest communist dug into his deep pockets. Jack Ma, founder of e-commerce giant Alibaba Group and a member of the ruling Communist Party, helped to pay for 1,000 ventilators delivered to New York in April. Ma’s foundation also is giving ventilators, masks and other supplies in Africa, Latin America and Asia. By Business Writer Joe McDonald. SENT: 1,060 words, photo. Also see MORE ON THE VIRUS OUTBREAK below. 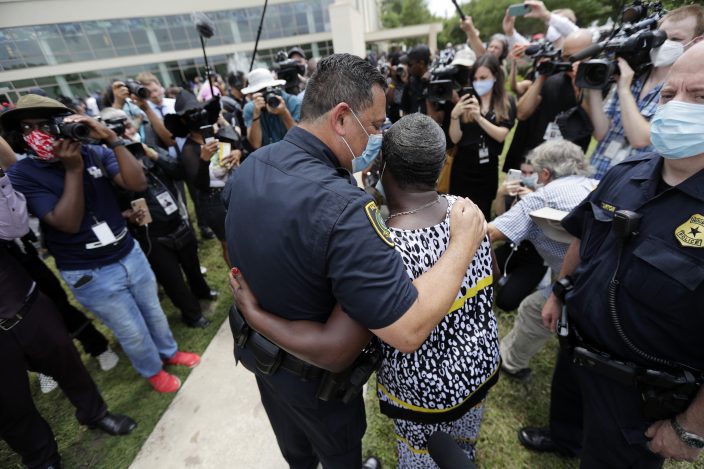 Houston police chief Art Acevedo and Charlene Davis embrace after Davis prayed for him as she stood in line at a public visitation for George Floyd at The Fountain of Praise church in Houston, Monday, June 8, 2020, in Houston.(AP PhotoEric Gay)

KOREAS-TENSIONS — North Korea says it will cut off all communication channels with South Korea as it escalates its pressure on the South for failing to stop activists from floating anti-Pyongyang leaflets across their tense border. By Hyung-Jin Kim. SENT: 870 words, photos. 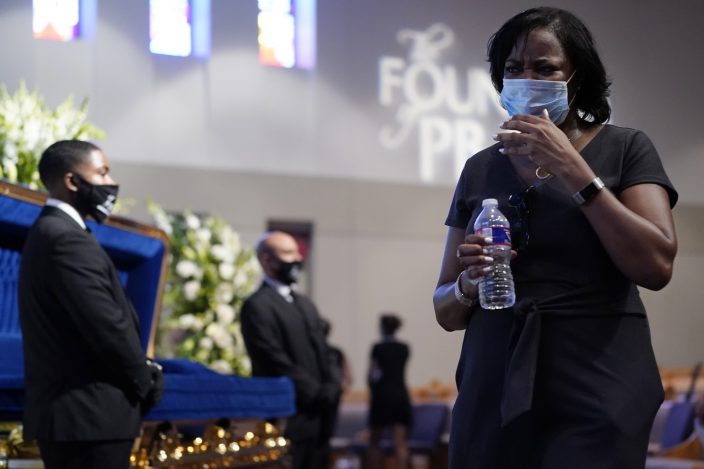 Mourners pass by the casket of George Floyd during a public visitation for Floyd at the Fountain of Praise church Monday, June 8, 2020, in Houston. (AP PhotoDavid J. Phillip, Pool)

AMERICA PROTESTS-FRANCE — Virus containment measures have made tensions even worse between police and marginalized residents of France’s low-income neighborhoods, many of whom are Arab or black and trace their roots to former French colonies. SENT: 980 words, photos. 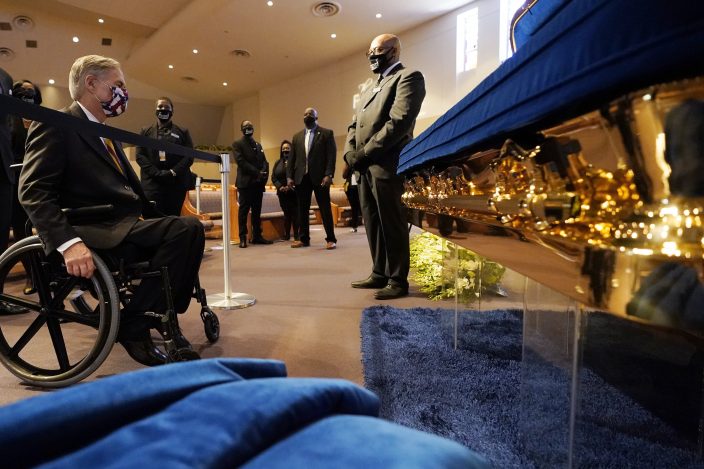 Texas Gov. Greg Abbott passes by the casket of George Floyd during a public visitation for Floyd at the Fountain of Praise church, Monday, June 8, 2020, in Houston. (AP PhotoDavid J. Phillip, Pool)

AMERICA-PROTESTS-WASHINGTON-STATE — Just days after Seattle’s mayor and police chief promised a month-long moratorium on using a type of tear gas to disperse protesters, the department used it again during an overnight demonstration. SENT: 960 words, photos.

A separate wire advisory has been sent detailing the AP's complete coverage of the protests. 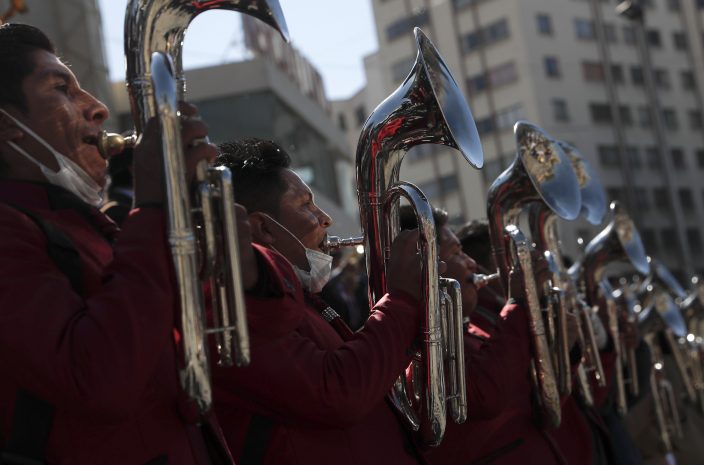 VIRUS OUTBREAK-FEDERAL WORKERS — A small number of workers are voluntarily starting to return to their desks at federal agencies, three months after Americans began sheltering in place and worksites began closing for the coronavirus lockdown. SENT: 660 words, photo. 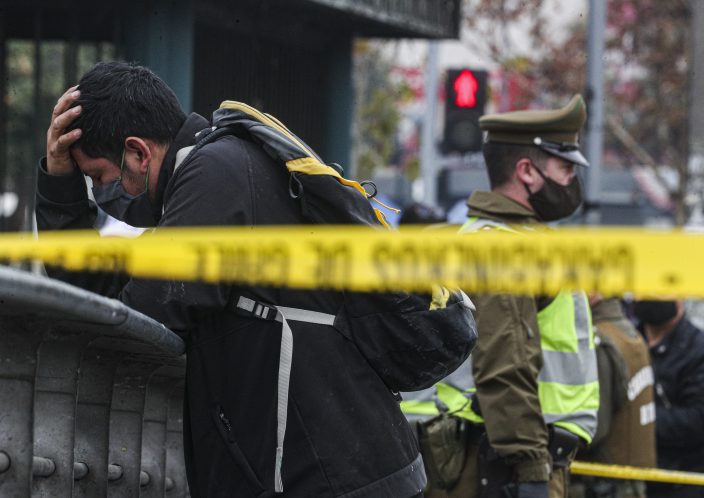 A Peruvian migrant is detained for appearing in a police database as positive for COVID-19, in downtown Santiago, Chile, Monday, June 8, 2020. The police have surrounded the area around the man with police tape to keep people from coming into contact with him. (AP PhotoEsteban Felix)

Social distancing signs are posted in the men's room at the Grand Station mall, during a temporary reopening of the shopping center in Bogota, Colombia, Monday, June 8, 2020. Bogota is performing a pilot test for the next eight days, requiring a distance of two meters between people, mandatory face masks, and a maximum mall occupancy of 35 percent. (AP PhotoFernando Vergara) 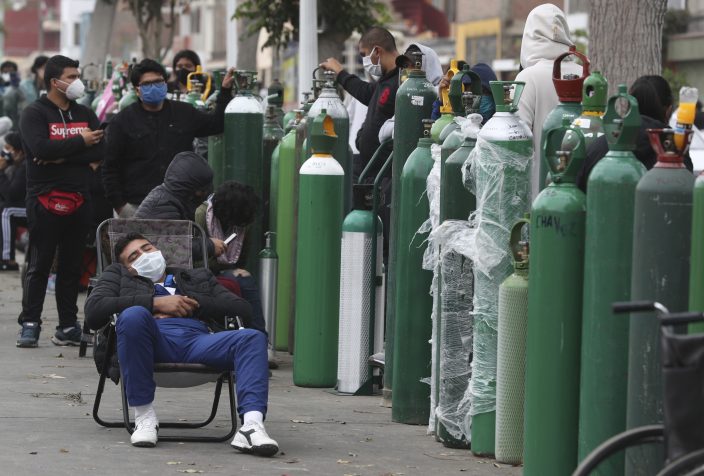 People wearing masks amid the spread of the new coronavirus wait for hours, some for 10 hours, to refill their oxygen cylinders at a shop that sells oxygen in Callao, Peru, Monday, June 8, 2020. Long neglected hospitals in Peru and other parts of Latin America are reporting shortages of oxygen as they confront the COVID-19 pandemic. (AP PhotoMartin Mejia)

ELECTION 2020 — Trump and Biden won’t face each other directly in Tuesday’s presidential primaries, but voting in Georgia and West Virginia gives both campaigns an opportunity to prove they can assemble a coalition strong enough to win in November. UPCOMING: Updates throughout the day; first polls close at 7 p.m.

ELECTION 2020-SOUTH CAROLINA — In the next step of a race already on pace to become the most expensive in South Carolina history, U.S. Sen. Lindsey Graham is taking on three little-known GOP challengers in a primary election, the last marker ahead of an expected general election face-off with Democrat Jaime Harrison. SENT: 380 words, photo.

ELECTION-2020-GEORGIA — The Democratic candidates vying to take on Republican Sen. David Perdue of Georgia in November face off in a primary election after weeks of delay caused by the coronavirus pandemic. SENT: 670 words.

HONG KONG-PROTESTS-ONE YEAR — A year on from the start of Hong Kong’s anti-government protests, the leader of the semi-autonomous Chinese city says that all sides should learn from the difficulties and challenging times over the past year. By Zen Soo. SENT: 530 words, photos.

MALAYSIA-ROHINGYA — Malaysian authorities detain 269 Rohingya refugees and find a body on board a suspected smuggling boat they said had been intentionally damaged so it couldn’t be turned back to sea. SENT: 390 words.

BON-APPETIT-JOURNALISTS-PROTEST — The editor-in-chief of Bon Appetit resigns after a photo of him dressed in a stereotypical Puerto Rican costume surfaced on social media. By Business Writer Tali Arbel. SENT: 670 words.

PLAYOFF PICTURE — Major League Baseball is talking about having as many as 16 teams in the playoffs this year if the season is able to start after a long delay caused by the coronavirus pandemic. By Baseball Writer Ben Walker. SENT: 700 words, photos.

TOKYO-Q&A — It’s been 2 1/2 months since the Tokyo Olympics were postponed until next year because of the COVID-19 pandemic. So where do the games stand? By Sports Writer Stephen Wade. SENT: 1,040 words, photo.

Day withdraws from final round of CJ Cup with neck inju ...