President Donald Trump's campaign manager warned in late spring that his juggernaut political operation — the “Death Star,” he called it — was about to start “pressing FIRE” for the first time.

What followed was a massive investment in television and online advertising designed to demonstrate the true might of Trump's reelection team. The Republican's campaign poured nearly $24 million into paid advertising focused largely on six battleground states in the seven-week period from the last week in April through the first week of June, according to spending data obtained by The Associated Press.

The Death Star attack did not have the intended effect. 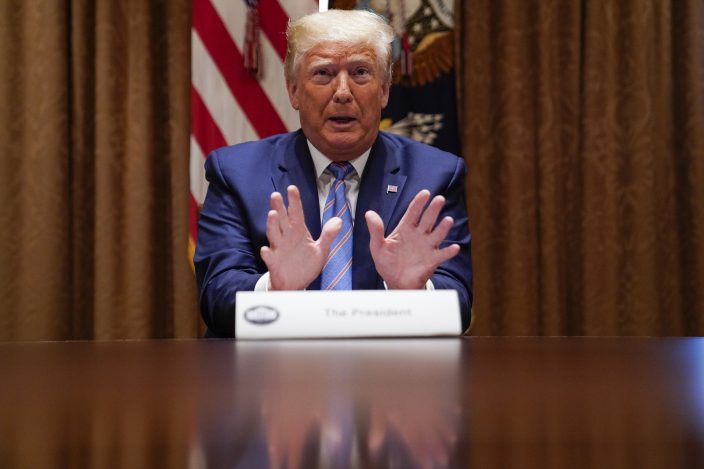 President Donald Trump speaks during a roundtable about America's seniors, in the Cabinet Room of the White House, Monday, June 15, 2020, in Washington. (AP PhotoEvan Vucci)

Some recent polls suggest a dip in Trump's standing and a majority of Americans believe the country is headed in the wrong direction. And nearly two months after Trump first unleashed his advertising tsunami, there are signs that his inability to demonstrate consistent leadership through multiple national crises has neutralized one of the best advertising campaigns money can buy.

“It’s frustrating,” former Wisconsin Gov. Scott Walker, a Republican, said of the president's inconsistent messaging, while praising the policies the Trump administration enacted before the pandemic shut down the economy.

“That’s the part that’s frustrating. It’s headed back in the right direction, but then every once in a while the message gets off track from the good things that he and his team are doing," Walker continued in an interview.

Advertising alone will not determine Trump's reelection, especially given that Trump and Biden are extremely well-known, and therefore, less susceptible to traditional persuasion campaigns. Still, paid advertising remains one of the most powerful tools available to political campaigns. And this spring's investment is just a taste of what's to come over the next 20 weeks.

Trump has almost unlimited resources to reach persuadable voters on their televisions, phones and computers. He reported more than $250 million in the bank at the end of April combined with the Republican National Committee and joint entities.

Trump campaign officials say it’s a mistake to take the performance of the campaign ad buys over the last month as predictive for the future. The campaign, they said, is only just starting to emerge from a coronavirus-induced freeze that dominated public attention, and they’ve spent only a fraction of their record-breaking war chest. They said they are seeing more public responsiveness to their anti-Biden message by the day, as more voters tune into the general election matchup.

“A lot of Americans know of Joe Biden but not very many know about Joe Biden,” said Trump campaign communications director Tim Murtaugh. “Right now, in most voters’ minds he is essentially the generic Democrat. We’re going to change that.

It remains to be seen how effective the Trump campaign's sophisticated advertising operation can be in the face of his own turbulent governing style and his constant stream of attention-grabbing social media posts. The president continues to struggle to lead the nation through the pandemic, the related economic fallout and sweeping civil unrest.

Democratic National Committee Chairman Tom Perez fired a shot of his own at Trump’s “Death Star.”

Democrats acknowledge that Trump has a well-funded political operation that should not be taken lightly, yet they are generally pleased with the state of the race.

By all accounts, Biden has an early advantage despite not yet spending a dollar on television advertising for the general election. The former vice president has begun to ramp up his online advertising, however. Biden's campaign spent almost $5 million on online advertising in the first week of June alone, although much of it was aimed at attracting donations as opposed to persuading voters to support him.

It seems to be working.

Biden announced on Monday that he raised $80.8 million last month alone working with the Democratic National Committee. In addition to the focus on online donations, his campaign has benefited from the broad surge of donations to progressive groups during the recent period of civil unrest.

Meanwhile, the advertising spending data shows that Trump has focused the vast majority of his paid media campaign on six states over the last seven weeks: Arizona, Florida, Michigan, North Carolina, Pennsylvania and Wisconsin. Trump's team has periodically raised the possibility of winning Democratic-leaning states like Minnesota, New Mexico and even Oregon, but the advertising numbers tell the story of a campaign decidedly on the defensive.

So far, at least, Trump's campaign is only spending money in states he won four years ago.

Florida tops the list. The president spent almost $5.6 million on television and online advertising in Florida between April 26 and June 6, according to data shared with the AP. Over the same period, he spent $3.7 million in Wisconsin, $3.1 million in Pennsylvania, $2.3 million in North Carolina, $1.7 million in Michigan and $1.1 million in Arizona. The campaign also spent another $6.3 million on national cable advertising.

While advertising is significant, Walker suggested that Trump's fate is tied more directly to the health of the nation.

“When you get stability both in the economy and just overall stability, you’re going to start to see the president’s numbers get closer to where they were a couple months ago, which was still very tight," Walker said. “I don’t think anything is going to be a slam dunk.”

Trump ramps up ad spending in bid to counter Biden