The deaths of George Floyd in Minneapolis and Rayshard Brooks in Atlanta in the span of less than three weeks have led to a push in the U.S. for more training of police officers in how to “de-escalate” tense situations before they explode in violence.

“You’ve got to get cops to understand that it’s not a cowardly act, that backing off could save this person’s life,” said Tom Manger, a retired police chief in Virginia and Maryland and former president of the Major Cities Chiefs Association.

Officers undergoing de-escalation training are taught how to keep their cool, talk to people in such a way as to calm them down, and use the least amount of force required. Typically the instruction includes exercises in which actors playing members of the public try to provoke officers. 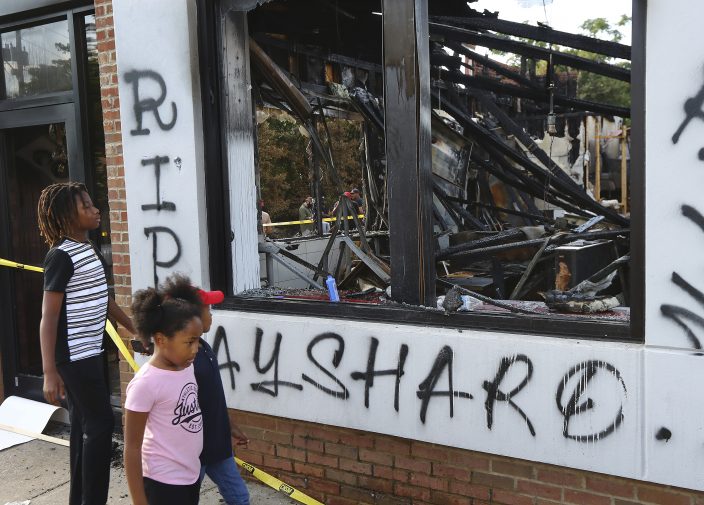 Children take in the burned Wendy's location in Atlanta on Monday, June 15, 2020, outside which Rayshard Brooks, a 27-year-old black man, was fatally shot by a white Atlanta police officer Friday night. (Curtis ComptonAtlanta Journal-Constitution via AP)

“It’s very clear that our police officers are to be guardians and not warriors within our communities,” Atlanta Mayor Keisha Lance Bottoms said Monday in announcing she will require city officers to continuously undergo such training in the wake of Brooks’ fatal shooting Friday night.

Calls for increased de-escalation training have also come from politicians on Capitol Hill as well as from California’s attorney general, Michigan lawmakers and Houston’s police chief.

President Donald Trump signed an executive order Tuesday that would encourage better police practices and establish a database of officers with a history of excessive-force complaints. It also would promote certification agencies that teach officers de-escalation techniques. 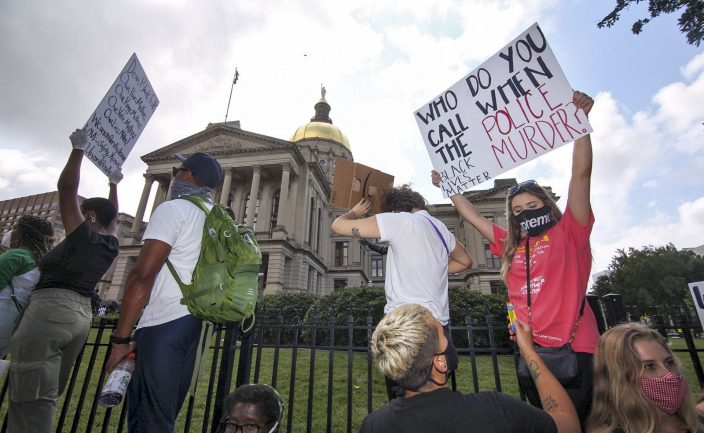 Demonstrators participate in the NAACP March to the Capitol in Atlanta on Monday, June 15, 2020, which coincided with the restart of the Georgia 2020 General Assembly. Lawmakers returned wearing masks and followed new rules to restart the session during the pandemic. (Steve SchaeferAtlanta Journal-Constitution via AP)

Such techniques have been around for years but have embraced more strongly amid the growing movement to stop the killings of black people by police.

Floyd was seized by police May 25 after being accused of passing a counterfeit $20 bill at a convenience store. He was pronounced dead after a white officer put his knee of Floyd's neck for nearly nine minutes.

Brooks, 27, was shot twice in the back Friday after police tried to handcuff him for being intoxicated behind the wheel of his car at a Wendy's drive-thru. 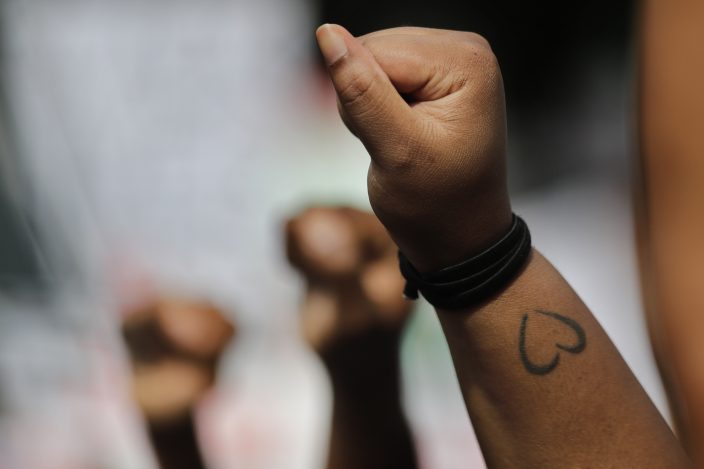 Brooks was cooperative during more than 30 minutes of conversation before things rapidly spun out control. He wrestled with officers, snatched one of their Tasers and pointed it at one of them as he ran through the parking lot.

The officer who gunned down Brooks was fired, and prosecutors are weighing charges against him and another member of the force.

Among other measures that have been adopted or are under consideration across the U.S. in the wake of the latest deaths: bans on chokeholds, making police disciplinary records public, releasing bodycam footage of shootings more quickly, and requiring officers to intervene when they see misconduct by fellow members of the force. 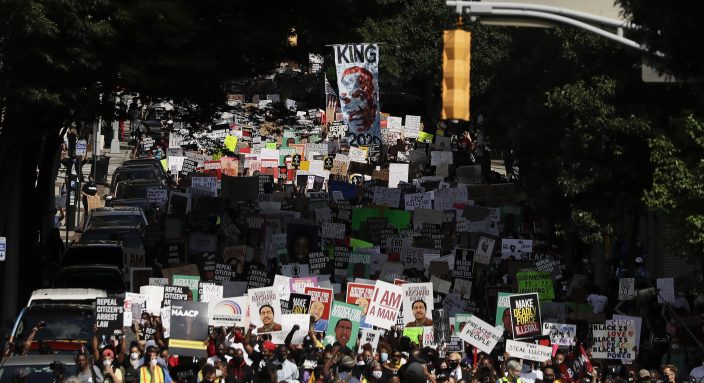 People march down the street towards the Georgia state capitol to protest against the mistreatment of black people and to press for policy change, Monday, June 15, 2020, in Atlanta. The NAACP March to the Capitol Monday coincided with the restart of the Georgia 2020 General Assembly. (AP PhotoBrynn Anderson)

Manger said that in situations like the one that ended in Brooks' death, officers should be taught to make high-pressure, split-second decisions that involve alternatives to force — for example, waiting for more backup to arrive or taking cover or retreating.

In the Atlanta case, the officer could have ducked behind a car or put enough distance between himself and Brooks so that the Taser — which can reach only 15 feet — couldn’t hit him, Manger said.

Even in a situation where deadly force can be justified, it’s often not necessary, he said. Police officers need to operate from the mindset that deadly force is really a last resort to be used only when they or others are in grave danger, Manger said. 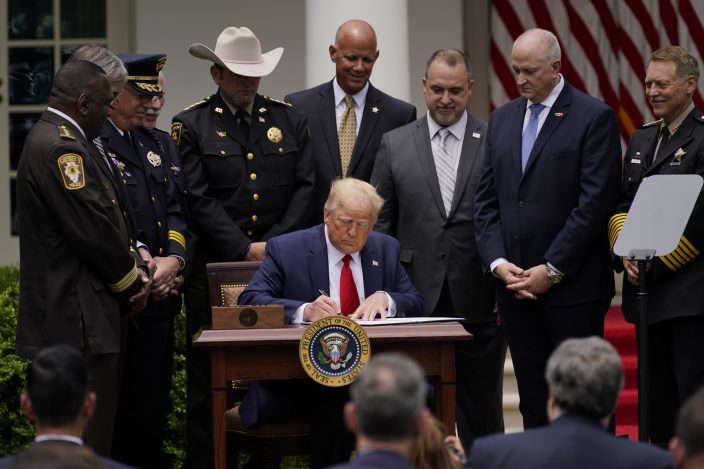 During the last round of protests surrounding the deaths of black men at the hands of police in 2014 and after, some departments embraced training on how to defuse tense situations. It got an endorsement from President Barack Obama’s task force on 21st century policing.

Some states continued to push for reform. In 2019, a California law allocated $10 million to use-of-force reforms including de-escalation training. Federal officers, too, have focused on decreasing their reliance on force through such techniques.

In New York City, the nation’s largest police department created a three-day de-escalation training program for officers on the job and also an academy seminar for new members of the force. It came after the 2104 death of Eric Garner in a police chokehold. 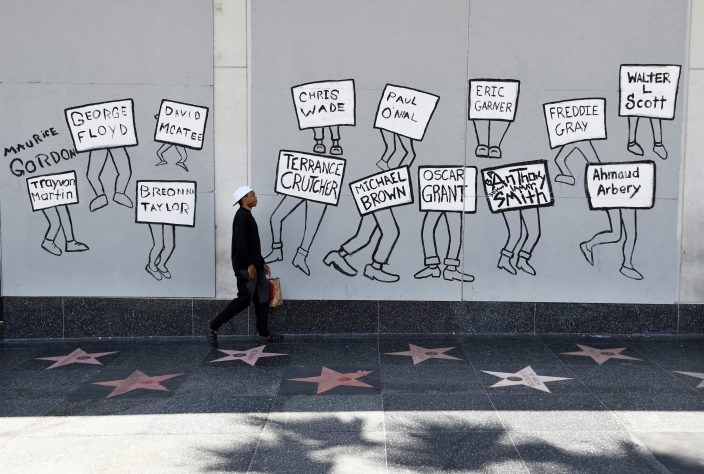 A man walks past a mural of black victims of police brutality on Hollywood Blvd., a day after a large protest march there, Monday, June 15, 2020, in Los Angeles. Protests continue to be held in U.S. cities over the death of George Floyd, a black man who died after being restrained by Minneapolis police officers on May 25. (AP PhotoChris Pizzello)

The course discourages verbal abuse and needless physical force. The message to every one of the department’s 36,000 uniformed officers: Keep cool. Officers learned how the volume of their voice, their presence and the way they address someone can immediately escalate a situation. 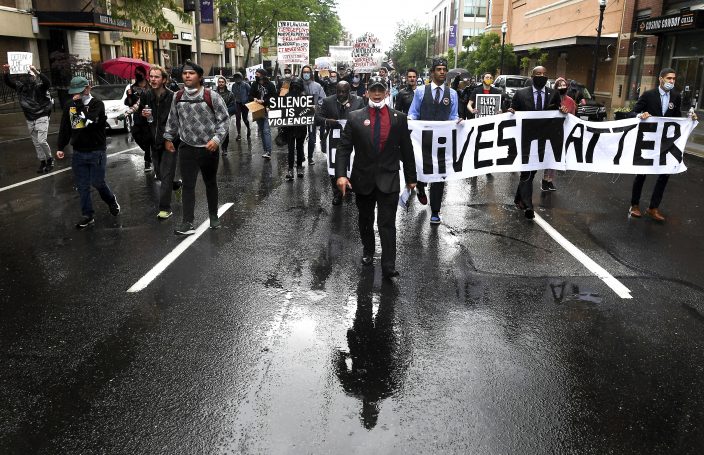 Kurtis Robinson, president of the Spokane chapter of the NAACP, leads a Black Lives Matter protest march amid a downpour Sunday, June 14, 2020, in Spokane, Wash. (Tyler TjomslandThe Spokesman-Review via AP) 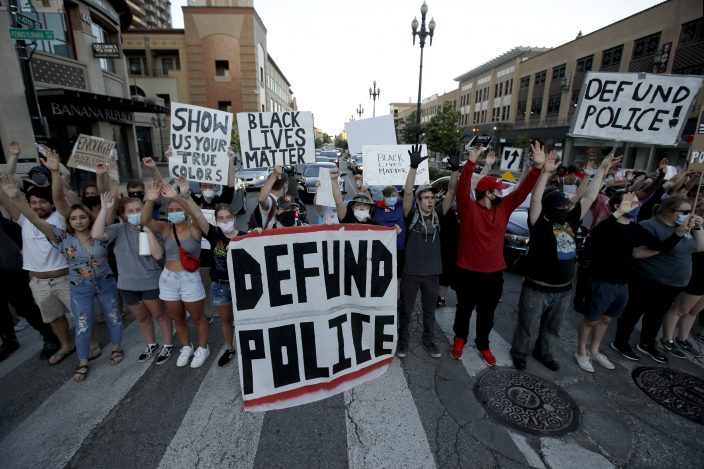 Demonstrators hold signs in the Country Club Plaza district of Kansas City, Mo. Saturday, June 13, 2020, as they protest the death of George Floyd who died after being restrained by Minneapolis police officers on May 25. (AP PhotoCharlie Riedel)

Rui Hachimura just wrapped up his ...

Amid protests for racial justice, Juneteenth gets new renown

Atlanta police call out sick over charges in fatal shooting

Autopsy: Atlanta man killed by police was shot in his back

Protesters in US call attention to deaths of more black men

George Floyd, whose death energized a movement, to be buried