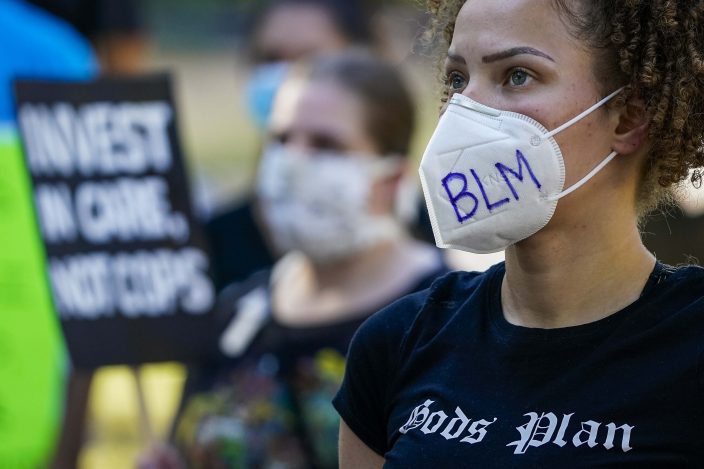 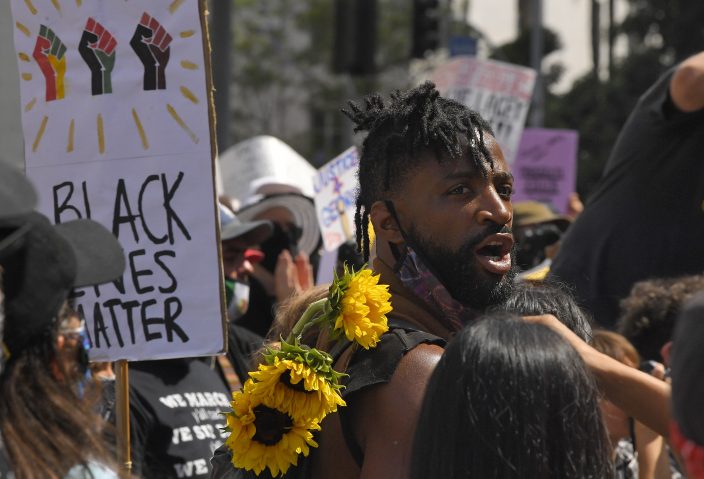 AMERICA PROTESTS — As Rayshard Brooks lay dying in a Wendy’s parking lot, prosecutors say the white Atlanta police officer who shot him in the back kicked him and didn’t give him medical attention for more than two minutes. “I got him!” Fulton County District Attorney Paul Howard quoted Officer Garrett Rolfe as saying. By Kate Brumback. SENT: 1,040 words, photos, video. With AMERICA PROTESTS-THE LATEST. 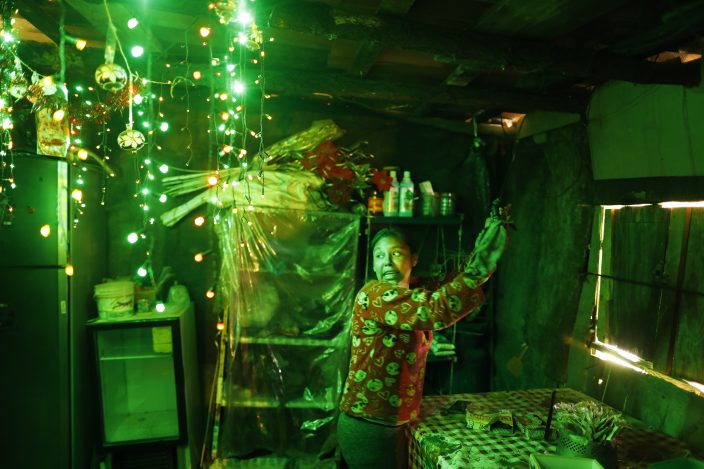 Cecilia Gabriela Hernandez Gaeta, 22, screws a lightbulb into a dangling socket which was not working, inside the small village shop her aunt ran out of their home before dying in April shortly after being hospitalized due to complications with home dialysis, in Piedra Grande, Huixquilucan, Mexico State, Wednesday, June 17, 2020. Hernandez, who shared a bed with her 52-year-old aunt and was her primary caretaker, says she was devastated when the hospital declared the cause of death COVID-19, denying the family the right to a wake or burial, despite a lack of coronavirus symptoms or any test results shown to the family. (AP PhotoRebecca Blackwell)

AMERICA PROTESTS-PROSECUTORS — Prosecutors across the country are defying traditionally cozy relationships with police departments, swiftly charging officers with assault and other crimes in the massive protests following the death of George Floyd and dropping charges for demonstrators arrested by the cops. By Alanna Durkin Richer and Michael Tarm. SENT: 1,070 words, photos.

VIRUS-OUTBREAK — As the race for a vaccine against the new coronavirus intensifies, rich countries are rushing to place advance orders for the inevitably limited supply to guarantee their citizens get immunized first — leaving significant questions about whether developing countries will get any vaccine before the pandemic ends. By Maria Cheng and Christina Larson. SENT: 1,150 words, photos. With VIRUS OUTBREAK-THE LATEST. Also see MORE ON THE VIRUS OUTBREAK below. 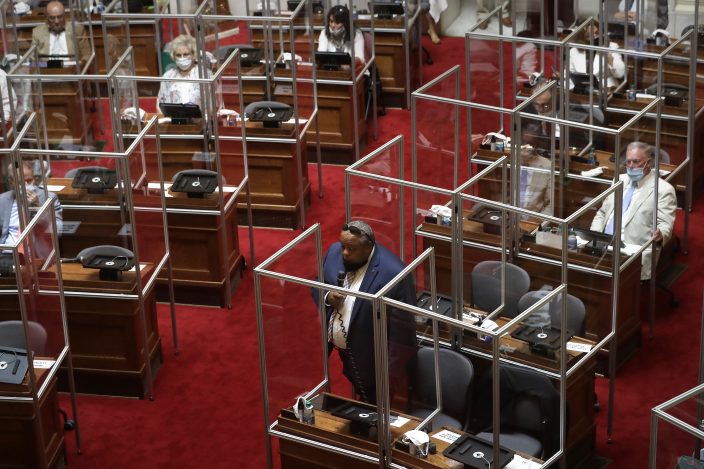 Rhode Island Democratic state Rep. Raymond Hull, below center, holds a microphone on the floor of the House Chamber while separated by plastic protective barriers at the start of a legislative session, Wednesday, June 17, 2020, at the Statehouse, in Providence, R.I. Wednesday's session was the first by the legislature to be held on the floor of the chamber since March of 2020 due to the coronavirus pandemic. (AP PhotoSteven Senne)

BRAZIL-BLACK LIVES MATTER — More than 600 people were killed by police in Brazil’s Rio de Janeiro state in the first months of this year, and most were black or biracial. As the Black Lives Matter movement brings hundreds of thousands to the streets around the world, demonstrators have been organizing the largest anti-police brutality demonstrations in years on the streets of Rio. By David Biller. SENT: 1,080 words, photos.

OCOEE MASSACRE — On Election Day a century ago, a white mob swept through a tiny Florida citrus town after a black man showed up at the polls to vote. Over two days of terror, the mob set fire to homes and drove black residents from their community. As the centennial of the 1920 Ocoee Election Day Riots approaches, Florida’s governor is considering a bill requiring schools to do more to highlight that day in history classes. By Bobby Caina Calvan. SENT: 850 words, photos. Also see MORE ON AMERICA PROTESTS below.

For coverage of the death of Racial Injustice on AP News.

AMERICA PROTESTS-WASHINGTON-ANALYSIS — The death of George Floyd in Minneapolis and the nationwide demonstrations that followed have roused once reluctant lawmakers and even a president who preaches law and order to push for police reforms. By Colleen Long. SENT: 980 words, photos. With AMERICA PROTESTS-POLICING BILLS-WHAT’S DIFFERENT — A look at dueling policing proposals considered by Congress.

GEORGE FLOYD-INVESTIGATION — Minnesota prosecutors acknowledge that a Minneapolis police officer had his knee on the neck of George Floyd for 7 minutes, 46 seconds — not the 8:46 that has become a symbol of police brutality — but said the one-minute error would have no impact on the criminal case against four officers. SENT: 700 words, photo.

VIRUS OUTBREAK-POLL-US RESPONSE — Vice President Mike Pence says the U.S. response to the coronavirus pandemic is “a cause for celebration,” but a new poll finds more than half of Americans calling it fair or poor. SENT: 700 words, photo.

VIRUS-OUTBREAK-VIRAL-QUESTIONS-HOTELS — Is it safe to stay in hotels as reopenings get underway? It depends on the precautions you and the hotel take. SENT: 240 words, photo.

VIRUS OUTBREAK-ONE GOOD THING-GET WELL SOON — A Bangladeshi group of volunteers is providing COVID-19 patients with fruit baskets and “get well soon” cards to keep their spirits up amid reports that many patients are being ostracized by their families and neighbors. SENT: 540 words, photos, video.

UNITED STATES-VOA — The new chief of U.S.-funded international broadcasting fires the heads of at least three outlets he oversees and replaced their boards with allies, in a move likely to raise fears that he intends to turn the Voice of America and its sister outlets into Trump administration propaganda machines. By Diplomatic Writer Matthew Lee. SENT: 900 words, photos.

INDIA-CHINA-HIMALAYAN STANDOFF — India cautions China against making “exaggerated and untenable claims” to the Galwan Valley area even as both nations tried to end a standoff in the high Himalayan region where their armies engaged in a deadly clash. SENT: 750 words, photos.

KOREAS-TENSIONS — South Korea says it hasn’t detected any suspicious activities by North Korea, a day after it threatened with provocative acts at the border in violation of a 2018 agreement to reduce tensions. SENT: 240 words, photos.

REFUGEES REPORT — The head of the U.N. refugee agency says he is “very worried” about the impact of the new coronavirus in Latin America, where millions of Venezuelans have fled upheaval at home and could face hardship abroad among lockdowns and other restrictive measures to fight the pandemic. SENT: 510 words, photos.

DEPUTIES-SHOOTING — The half-brother of a black man found hanged in a Southern California park was killed by Los Angeles County sheriff’s deputies after they say he opened fire on them. SENT: 470 words.

POOR-PEOPLE’S-CAMPAIGN — Clergy and religious leaders are preparing to hold a virtual march Saturday to highlight the plight of Americans struggling with poverty. SENT: 650 words, photos.

SEXUAL MISCONDUCT-DANNY MASTERSON — “That ’70s Show” actor Danny Masterson is charged with the rapes of three women in the early 2000s, Los Angeles prosecutors say, the culmination of a three-year investigation that resulted in a rare arrest of a famous Hollywood figure in the #MeToo era. By Entertainment Writer Andrew Dalton. SENT: 750 words, photos.

FINANCIAL-MARKETS — Shares were mostly lower in Asia after another day of wobbly trading on Wall Street as markets eased off the accelerator following their big rally. By Business Writer Elaine Kurtenbach. SENT: 750 words, photos. With BRITAIN-ECONOMY — Bank of England set to unveil another big stimulus for U.K.

LGBT RIGHTS-WORKERS — Even with this week’s Supreme Court ruling, the workplace will be far from equal for lesbian, gay, bisexual and transgender Americans. By Business Writers Cathy Bussewitz and Joseph Pisani. SENT: 1,070 words, photos.

Cole Beasley was so committed to b ...