A traditional day of celebration turned into one of protest Friday, as Americans marked Juneteenth, a holiday that long commemorated the emancipation of enslaved African Americans but that burst into the national conversation this year after widespread demonstrations against police brutality and racism.

In addition to the traditional cookouts and readings of the Emancipation Proclamation — the Civil War-era order that declared all slaves free in Confederate territory — Americans were marching, holding sit-ins or car caravan protests.

In Nashville, Tennessee, about two dozen Black men, most wearing suits, quietly stood arm in arm Friday morning in front of the city’s criminal courts. Behind them was a statue of Justice Adolpho Birch, the first African American to serve as chief justice of the Tennessee Supreme Court. 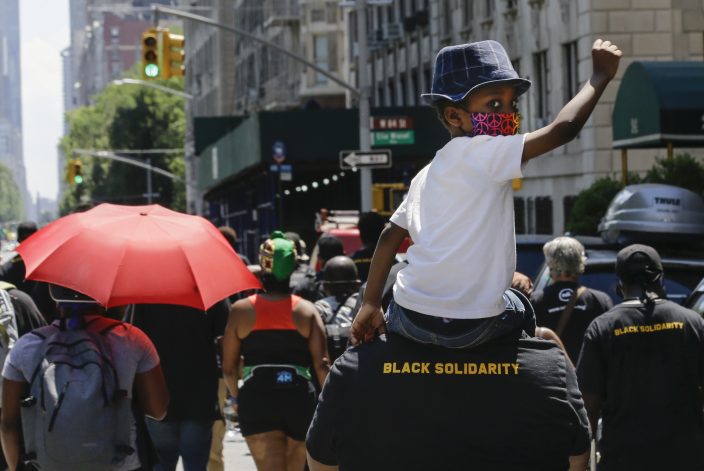 A man carries a child as they march near Central Park, during a Juneteenth celebration Friday, June 19, 2020, in New York. Juneteenth commemorates when the last enslaved African Americans learned they were free 155 years ago. Now, with support growing for the racial justice movement, 2020 may be remembered as the year the holiday reached a new level of recognition.(AP PhotoFrank Franklin II)

“If you were uncomfortable standing out here in a suit, imagine how you would feel with a knee to your neck,” said Phillip McGee, one of the demonstrators, referring to George Floyd, a Black man who died after a white Minneapolis police officer pressed a knee into his neck for several minutes. The killing has sparked weeks of sustained, nationwide protest.

Former President Abraham Lincoln first issued the Emancipation Proclamation on Sept. 22, 1862, and it became effective the following Jan. 1. But it wasn’t enforced in many places until after the Civil War ended in April 1865. Word didn’t reach the last enslaved Black people until June 19 of that year, when Union soldiers brought the news of freedom to Galveston, Texas.

Most states and the District of Columbia now recognize Juneteenth, which is a blend of the words June and 19th, as a state holiday or day of recognition, like Flag Day. But in the wake of protests of Floyd's killing this year and against a backdrop of the coronavirus pandemic that has disproportionately harmed Black communities, more Americans — especially white Americans — are becoming familiar with the holiday and commemorating it. 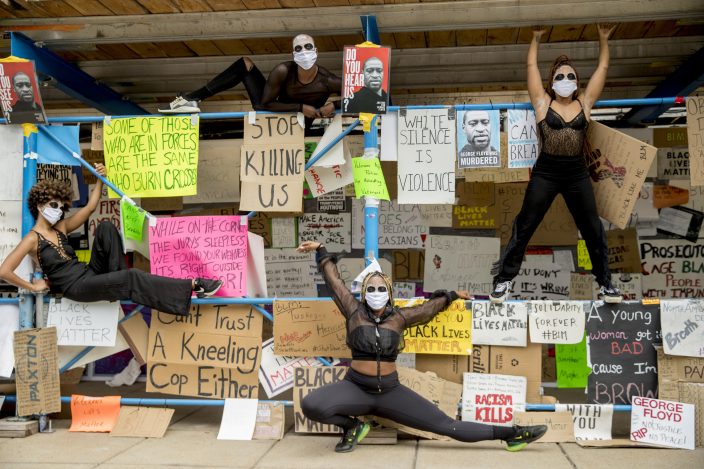 From left, independent dancers Fana Tesfagiorgis of New York, Danial Moore of Suitland, Md., Chawnta Marie of Los Angeles, and Krystal Butler of Washington, pose for a performance with of hundreds of signs put up along the front of the U.S. Chamber of Commerce building on H Street and 16th Street Northwest renamed Black Lives Matter Plaza near the White House in Washington, Friday, June 19, 2020, to mark Juneteenth, the holiday celebrating the day in 1865 that enslaved black people in Galveston, Texas, learned they had been freed from bondage, more than two years after the Emancipation Proclamation. (AP PhotoAndrew Harnik)

“We didn’t just learn about Juneteenth. Other people just learned about Juneteenth,” said Charity Dean, director of Detroit’s office of Civil Rights, Inclusion and Opportunity, who spoke at an event that drew hundreds of people Friday. “We’re here today because this is a Black city, and we are excited to be Black in this city and to make change.”

As the protests force more and more Americans to grapple with racism in the country's past and present, some places that didn't already mark Juneteenth as a paid holiday moved in recent days to do so, including New York state and Huntington, West Virginia.

In Tennessee, Republican Gov. Bill Lee signed a proclamation Friday to recognize Juneteenth Day. The move came the week after Republican lawmakers voted to keep in place a day commemorating Confederate general and early Ku Klux Klan leader Nathan Bedford Forrest but remove the governor’s responsibility to sign the annual proclamation for it. Lee had proposed eliminating the day but said lawmakers made a step in the right direction. 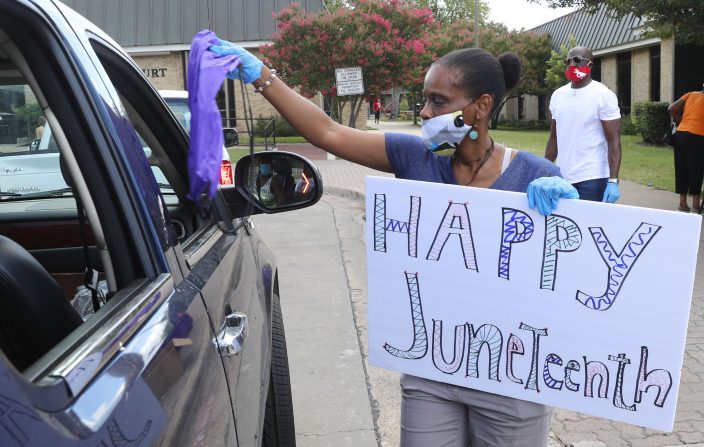 Kim Gardner distributes an aid bag during a drive through Juneteenth 2020 celebration in Dallas, Friday, June 19, 2020. Juneteenth marks the day in 1865 when federal troops arrived in Galveston, Texas to take control of the state and ensure all enslaved people be freed. (AP PhotoLM Otero)

In addition, amid longstanding demands to remove symbols and names associated with slavery and oppression, some are coming down. Hundreds gathered Thursday night in an Atlanta suburb to watch a crane remove a Confederate monument that had stood in the town square since 1908. A Louisiana tourist commission abandoned a 19-year-old promotion touting “New Orleans Plantation Country,” saying it will focus instead on the region’s “whole story,” including the cruel history of slavery on plantations.

Protesters in Portland — who took to the streets for the 22nd consecutive night Thursday — tore down a statue of George Washington that was erected in the 1920s. 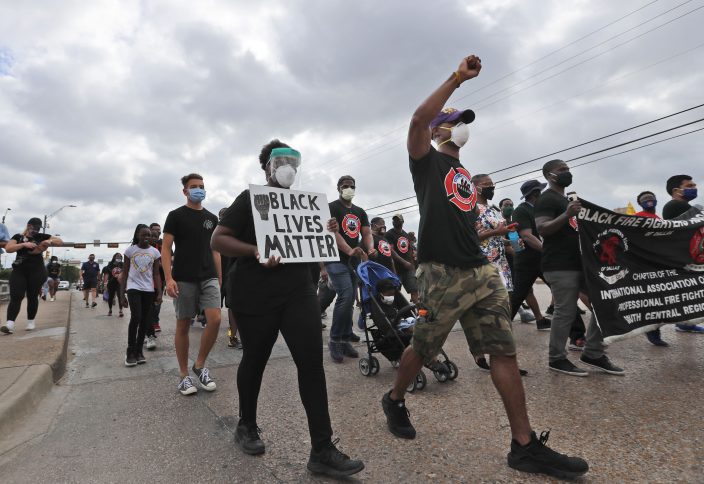 Protesters march in a Black Lives Matter demonstration organized by the Dallas Black Firefighters Association on Juneteenth 2020 in Dallas, Friday, June 19, 2020. Juneteenth marks the day in 1865 when federal troops arrived in Galveston, Texas to take control of the state and ensure all enslaved people be freed, more than two years after the Emancipation Proclamation. (AP PhotoLM Otero)

Events marking Juneteenth were expected to be held in every major American city on Friday, although some were being held virtually due to the coronavirus.

“Black people came here against their will and made America what it is today,” said New Yorker Jacqueline Forbes, a Jamaican immigrant, who marched on the Brooklyn Bridge. She said she wants Juneteenth to carry a meaning akin to July 4th. “This is something we need to celebrate.”

In Louisiana, community and environmental groups won a court fight to hold a Juneteenth ceremony at a site archaeologists have described as probably a cemetery for enslaved African Americans. The land is now being used to build a $9.4 billion chemical complex. 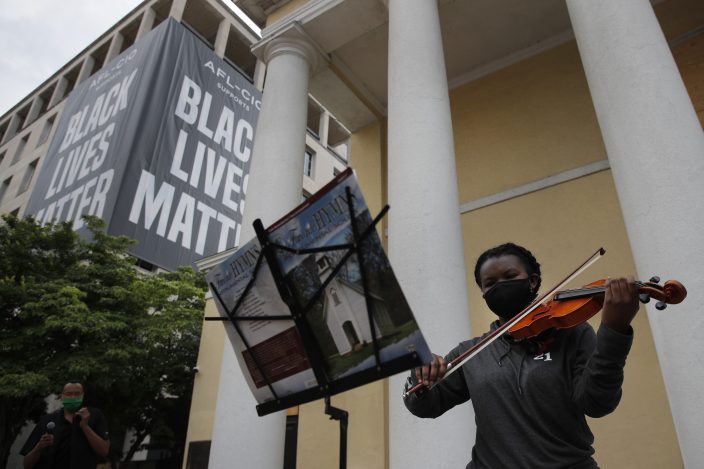 Jordanne Semper-Scott plays a hymn on her violin during a service outside St. John's Episcopal Church near the White House in Washington, Friday, June 19, 2020. In the background a sign hanging on the AFL-CIO building reads "BLACK LIVES MATTER" (AP PhotoCarolyn Kaster)

Philadelphia’s biggest Juneteenth parade and festival was canceled because of the virus outbreak, but several other celebrations popped up, including a gathering of roughly 200 people, mostly Black men dressed in black T-shirts, who marched to a park.

Thousands of people gathered at an organized religious rally in downtown Atlanta, where speakers and attendees called for an end to racism.

In St. Petersburg, Florida, city officials and community members celebrated with the unveiling of a block-long, colorful mural that said “Black Lives Matter." 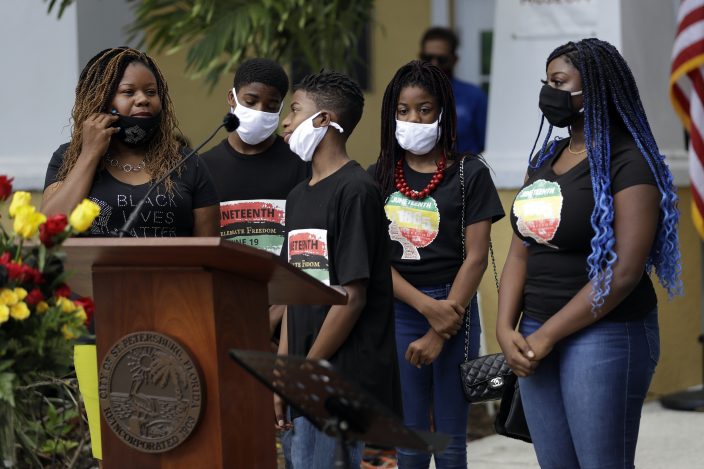 LaDonna Butler, left, looks on as her children tell what Juneteenth means to them during a celebration outside the Dr. Carter G. Woodson African American Museum Friday, June 19, 2020, in St. Petersburg, Fla. Juneteenth marks the day in 1865 when federal troops arrived in Galveston, Texas to take control of the state and ensure all enslaved people be freed. (AP PhotoChris O'Meara)

“We know our lives matter. You don’t have to tell us that. We’re trying to tell the world that," said Plum Howlett, a tattoo artist who painted part of the mural.

President Donald Trump issued a message for Juneteenth in which he noted “the unimaginable injustice of slavery and the incomparable joy that must have attended emancipation.”

“It is both a remembrance of a blight on our history and a celebration of our Nation’s unsurpassed ability to triumph over darkness,” Trump added. 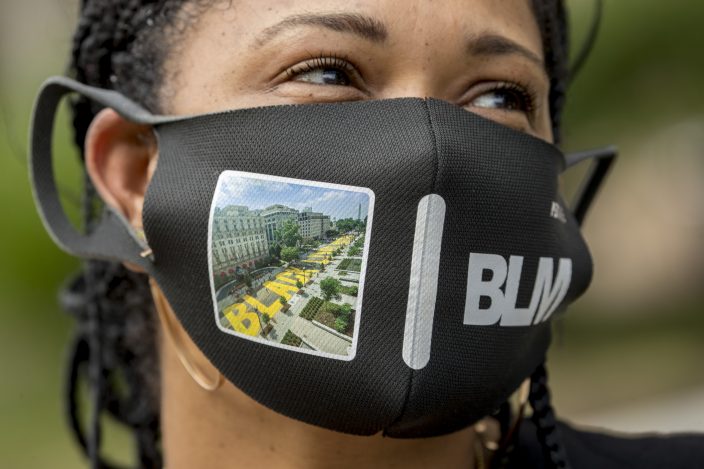 Trump had originally planned a rally in Tulsa, Oklahoma, Friday, but changed the date to Saturday amid an uproar about his appearance on a date of such significance. Protesters have been gathering at the venue this week ahead of his appearance. 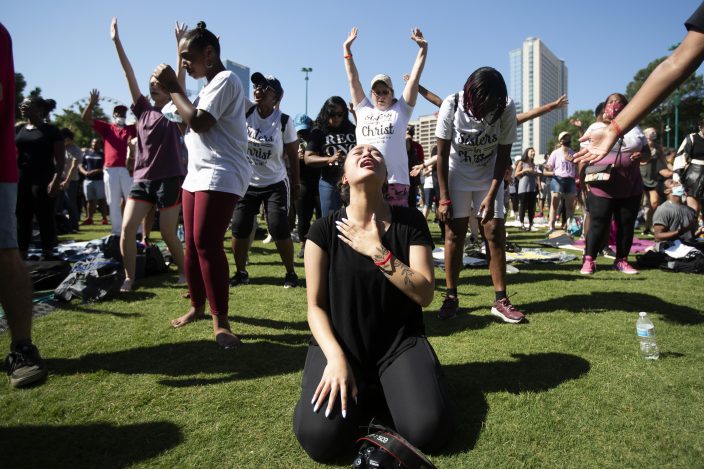 Young volunteers Madelyn Brown, 7, and Alicia Carter, 11, help distribute food at the Everybody Eats Juneteenth Food Drive, at the Universal Daroff Charter School, Friday, June 19, 2020, in Philadelphia. Friday marks Juneteenth, the day in 1865 when federal troops arrived in Galveston, Texas to take control of the state and ensure all enslaved people be freed, more than two years after the Emancipation Proclamation. (Jessica GriffinThe Philadelphia Inquirer via AP) 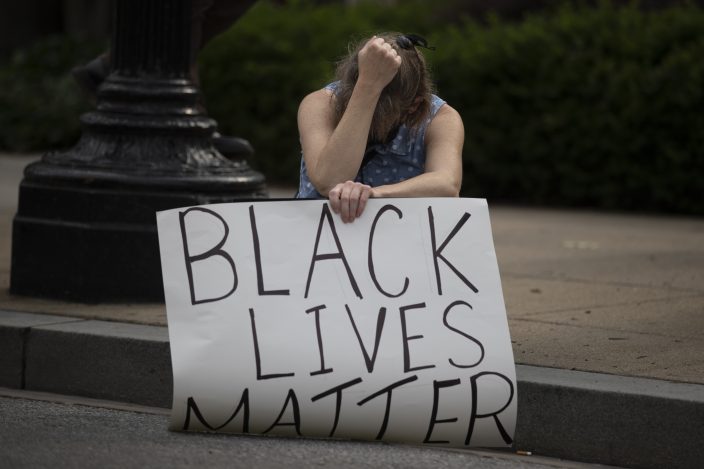 Beth Reilly bows her head in prayer during a service outside St. John's Episcopal Church near the White House in Washington, Friday, June 19, 2020, as she holds a "Black Lives Matter" sign. (AP PhotoCarolyn Kaster)

Packers agree to terms on extension with DT Kenny Clark

Atlanta police call out sick over charges in fatal shooting

Autopsy: Atlanta man killed by police was shot in his back

Protesters in US call attention to deaths of more black men

George Floyd, whose death energized a movement, to be buried