NEW DELHI — India's confirmed coronavirus cases crossed half a million on Saturday with another record 24-hour jump of 18,552 infections.

The surge prompted authorities in the northeastern state of Assam to impose a two-week lockdown in the state capital of Gauhati. About 700 new cases were reported there in just four days. 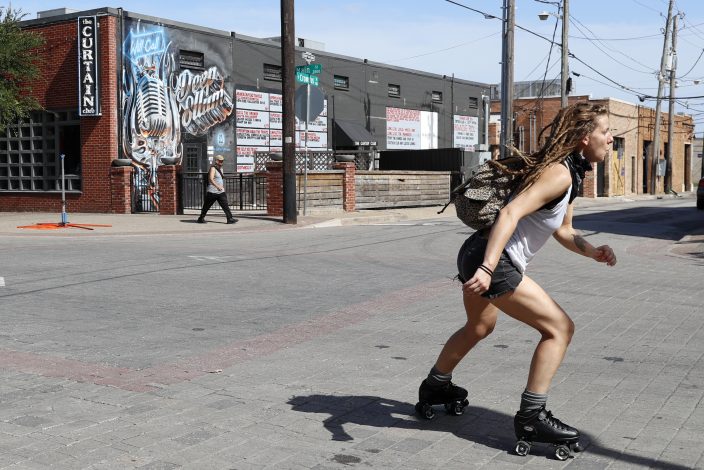 A woman skates through an intersection in the Deep Ellum entertainment district in Dallas, Friday, June 26, 2020. Deep Ellum is destination well known for its restaurants, cafes, tattoo shops and live music venues. Texas Gov. Greg Abbott announced Friday that he is shutting bars back down and scaling back restaurant capacity to 50%, in response to the increasing number of COVID-19 cases in the state. (AP PhotoTony Gutierrez)

Health Minister Himanta Biswa Sarma said the rest of Assam will be placed under a night curfew and weekend lockdowns.

He urged people to store essential goods and signaled a tighter lockdown where even grocery stores would be closed. 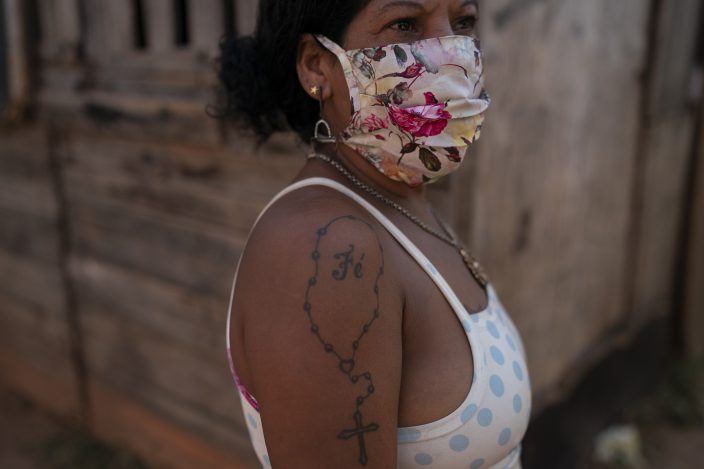 Resident Luciana Ferreira da Cruz poses for the photo featuring a rosary tattoo on her arm coupled with the Portuguese word for faith, in an area occupied by squatters in a poor region amid the outbreak of the new coronavirus in Rio de Janeiro, Brazil, Friday, June 26, 2020. "Everything has a start and an end. We gonna win this pandemic", says the 47-year-old woman who works collects aluminum cans to cash in for money. (AP PhotoLeo Correa)

— Coronavirus task force briefs — but not at White House

— Judge: US must free migrant children from family detention

— A hard-hit tribe in Arizona is putting tougher restrictions in place to prevent further spread of the coronavirus in a state where infections are surging. The White Mountain Apache Tribe has ordered residents to go on lockdown this weekend or risk fines. 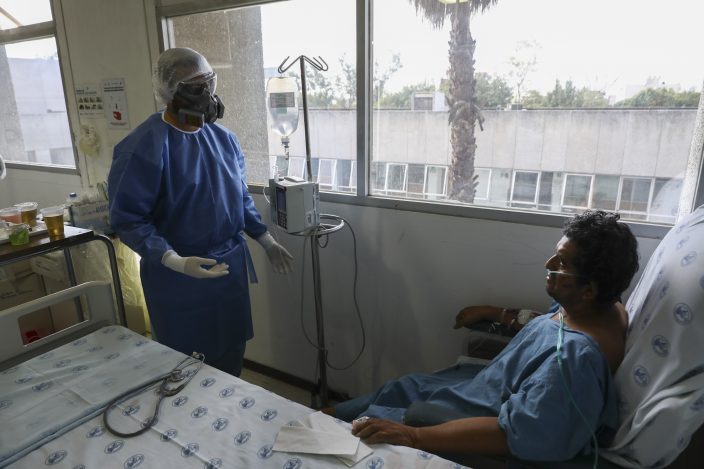 A healthcare worker wearing full protective gear talks with a patient in a ward reserved for COVID-19 patients at the Hospital Juarez, in Mexico City, Friday, June 26, 2020. Mexico ranks seventh globally in COVID-19 deaths and third in its mortality rate among the 20 currently most affected countries, according to Johns Hopkins University. (AP PhotoEduardo Verdugo)

— Witnesses say that hospitals in the capital of Venezuela’s main oil-producing state are filled with coronavirus patients and dozens of health workers have been infected. These are the first reports the pandemic is overwhelming the country’s debilitated health care system.

— The governor of a southern Italian region is insisting that residents who live in an apartment complex where many Bulgarian seasonal farm workers tested positive for COVID-19 stay inside for 15 days, not even emerging to buy food. 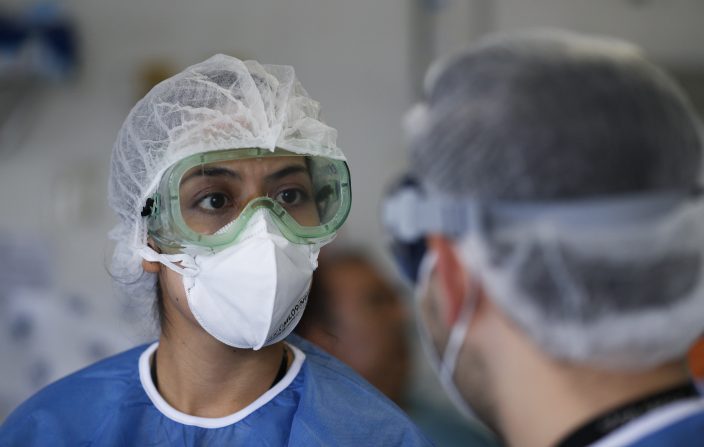 Medical staff wearing protective gear talk about a patient in a COVID-19 ward at the Hospital Juarez, in Mexico City, Friday, June 26, 2020. Mexico ranks seventh globally in COVID-19 deaths and third in its mortality rate among the 20 currently most affected countries, according to Johns Hopkins University. (AP Photo Eduardo Verdugo)

SEOUL, South Korea — South Korea has reported 51 more confirmed coronavirus cases as new clusters emerge in the densely populated Seoul area where people have been increasingly venturing out despite government warnings against complacency.

Thirty-five of the new cases are in the capital region, which is at the center of a COVID-19 resurgence threatening to erase earlier gains against the virus. 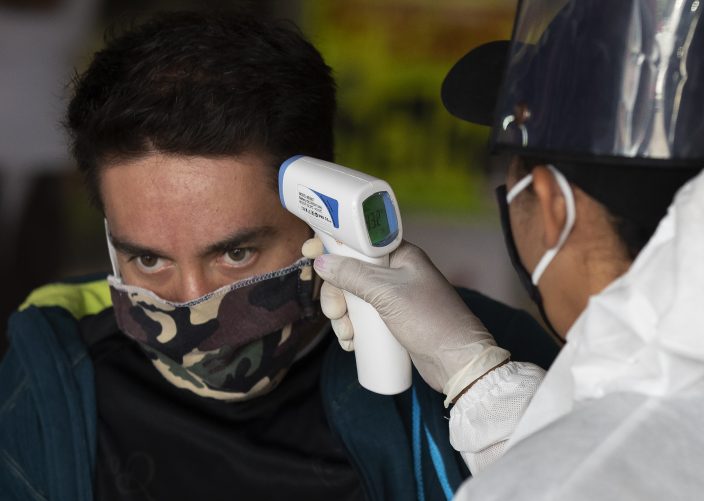 A worker dressed in full protection gear measures the temperature of a shopper as a measure to curb the spread of the COVID-19, at the Central de Abasto wholesale market in Mexico City, Friday, June 26, 2020. The main wholesale market detects dozens of new coronavirus cases every week. (AP PhotoMarco Ugarte)

Authorities are struggling to trace contacts and predict infection routes as new clusters pop up. Hundreds of infections have been linked to nightspots, church gatherings, restaurants and low-income workers who couldn’t afford to stay home.

BEIJING — China has reported an uptick in new coronavirus cases a day after national health authorities said they expected an outbreak in Beijing to be brought under control soon.

The National Health Commission said Saturday that 21 more cases had been confirmed nationwide in the latest 24-hour period, including 17 in the nation’s capital.

City officials have temporarily shut a huge wholesale food market where the virus spread widely, re-closed schools and locked down some neighborhoods. Anyone leaving Beijing is required to have a negative virus test result within the previous seven days. Many Chinese are traveling during a four-day holiday weekend that ends Sunday.

China has reported 83,483 cases and 4,634 deaths in the pandemic. It does not include in the numbers people who test positive but don't show symptoms.

About 300 people are due to arrive in Adelaide this weekend from Mumbai, India, while hundreds are expected to follow from South America and Indonesia.

People in hotel quarantine will be tested for the coronavirus at the start and end of their 14-day isolation.

South Australia state Health Minister Stephen Wade says he is preparing for about 5% to 10% of returnees being infected, as was the case when people arrived from Indonesia in other states.

Melbourne reported 30 new cases Friday, continuing a run of double-digit increases that has more than tripled Victoria state’s active cases to 183 in just over a week.

In Houston, county officials Friday elevated a public threat warning system to the highest level. Harris County Judge Lina Hidalgo said “We never brought the curve all the way down. We only flattened it.”

Hospitalizations in Texas, reported by state health officials, have now skyrocketed more than threefold over the past month. New records are set daily, and Abbott has brought back a ban on elective surgeries to free up beds.

RANCHO CORDOVA, Calif. — Gov. Gavin Newsom said Friday that he wants an agricultural Southern California county to reimpose stay-home orders amid a surge in positive coronavirus tests there and through much of the state.

Imperial County, with a population of 175,000 people on the state’s border with Mexico, has been the slowest in the state to reopen amid continued high positivity rates, which have averaged 23% in the last week, compared with 5.7% statewide.

The Imperial Valley, which provides many of the vegetables in U.S. supermarkets in the winter, lies across the border from Mexicali, a sprawling industrial city of 1 million people that has enormous influence on its economy and culture.

Newsom said San Francisco is also pausing plans to reopen businesses that were expected to open Monday, such as hair salons, museums and outdoor bars.

NEW YORK — A federal judge has blocked New York state from enforcing coronavirus restrictions limiting indoor religious gatherings to 25% capacity when other types of gatherings are limited to 50%.

NEW ORLEANS -- The number of reported COVID-19 cases in Louisiana took another large one-day jump, increasing Friday by more than 1,300 as the number of people hospitalized with the disease caused by the new coronavirus continued upward.

Some of the growth in known case numbers can be attributed to increased testing. However, the number of people sick enough to be hospitalized — considered a key indicator that the virus is spreading — went up to 700. The figure is down from nearly 2,000 in April but up from a low of 542 on June 13.

The increasing numbers led Gov. John Bel Edwards this week to delay plans to further lift restrictions on public gatherings and some business activity. Edwards has promised stepped up enforcement on businesses that aren’t complying with virus-related restrictions on capacity and requirements that employees dealing with the public wear masks.

The Florida agency that governs bars announced the ban on Twitter, minutes after the Department of Health reported 8,942 new confirmed cases, topping the previous record of 5,500 set Wednesday.

More than 24,000 cases have been reported since Saturday, more than a fifth of the 111,724 cases confirmed since March 1. The department had not updated its death total, which still stood at 3,327.

The seven-day average for positive tests dropped slightly to 13.4%, down 1 percentage point from Thursday but still triple the rate of 3.8% of June 1. State officials have attributed much of the new outbreak to young adults flocking to bars after they reopened about a month ago.

UNITED NATIONS — The United Nations is marking its 75th anniversary with a scaled-down event because of the COVID-19 pandemic, one of many challenges a deeply divided world must tackle along with poverty, inequality, discrimination and unending wars.

U.N. Secretary-General Antonio Guterres told Friday’s virtual commemoration of the signing of the U.N. Charter that “global pressures are spiraling up” and “today’s realities are as forbidding as ever.”

He said people continue to lose trust in political establishments and has spoken of rising populism threatening multilateralism and denounced xenophobia, racism and intolerance.

“Today’s marches against racism were preceded by widespread protests against inequality, discrimination, corruption and lack of opportunities all over the world – grievances that still need to be addressed, including with a renewed social contract,” he said in a video address.

“Meanwhile,” Guterres said, “other fundamental fragilities have only grown: the climate crisis, environmental degradation, cyberattacks, nuclear proliferation, a push-back on human rights and the risk of another pandemic.”

He stressed the urgent need for global cooperation.

“One virus ... has put us on our knees, and we have not been able to fight it effectively,” Guterres told reporters Thursday. “It’s spreading now everywhere. There was no control, no effective coordination among member states. We are divided in fighting COVID‑19.”

ROME — Italy registered 30 more deaths of people with coronavirus infections on Friday, with 16 of them in Lombardy, the northern region that continues to still have by far the highest daily tally of new confirmed cases.

According to Health Ministry data, the nation confirmed 259 new cases since Thursday, raising to 239,961 the number of known coronavirus infections since Italy’s outbreak began in late February.

Deaths now total 34,708. Authorities say the number of overall cases and deaths is certainly higher, since many without serious symptoms didn’t get tested, and many died in nursing homes without being tested.

Meanwhile, Premier Guiseppe Conte said Italy’s classrooms will be receiving students starting on Sept. 14, more than six months after the government’s efforts to contain the spread of COVID-19 shuttered schools, forcing millions of students to have lessons remotely.