MELBOURNE, Australia — Australia’s second-largest city will lock down dozens of suburbs for a month in a bid to contain the spread of coronavirus.

Andrews announced 10 zip codes covering 36 suburbs in which residents will be required to stay at home from Wednesday night until July 29 except for four permitted reasons. 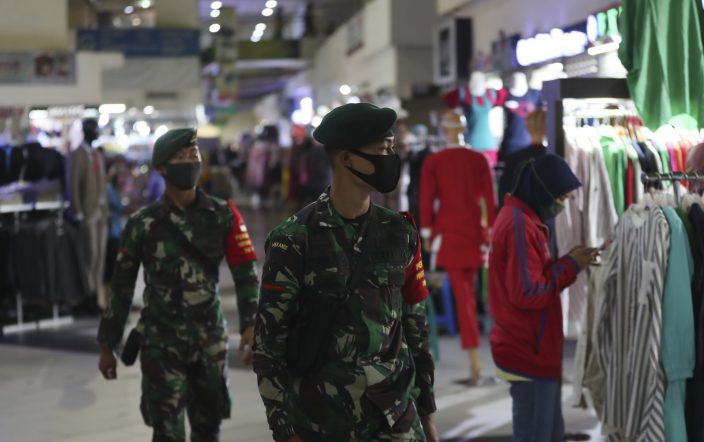 Residents will face fines if they leave home for reasons other than to give or receive care, to exercise, to buy essentials or to go to work or school. People who live outside those suburbs will only be allowed to enter them for the same reasons.

Andrews also announced there would be no international flights allowed into Melbourne for the next two weeks to help curb infections. 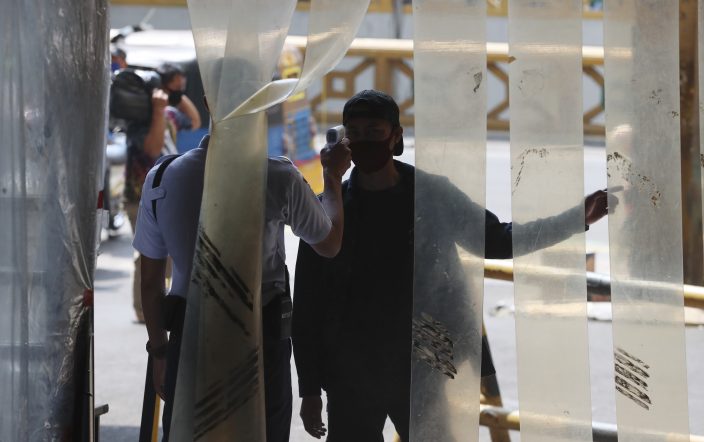 A security guard checks the body temperature of a men before entry a market, amid coronavirus outbreak in Jakarta, Indonesia Tuesday, June 30, 2020.(AP PhotoAchmad Ibrahim)

— Experts say the pandemic is wreaking havoc in poor and war-torn nations.

— UK PM Boris Johnson says the pandemic “has been a disaster” for Britain. 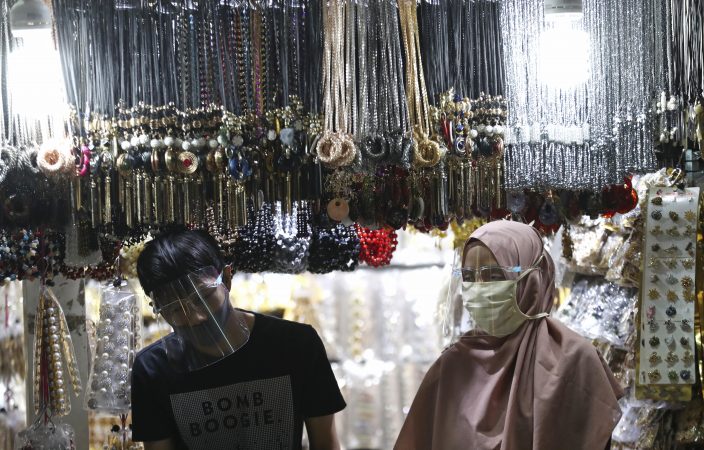 — The pandemic means millions of women in Africa and other developing regions could lose years of success in contributing to household incomes and asserting their independence. 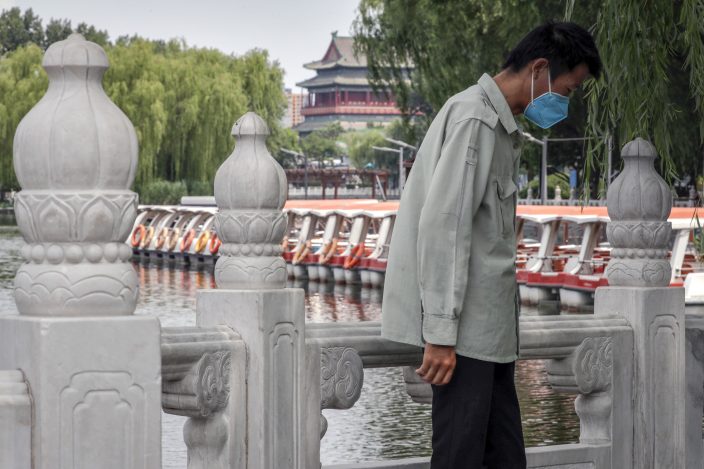 A man wearing a protective face mask to help curb the spread of the coronavirus stands against a roll of boats parked on the barricaded Houhai Lake, a usually popular tourist spot before the new coronavirus outbreak in Beijing, Tuesday, June 30, 2020. China, where the coronavirus pandemic began in December, was the first economy to reopen in March after the ruling Communist Party declared victory over the disease. Manufacturing and other activity is reviving but demand for exports is feeble and Chinese consumers, worried about losing jobs, are reluctant to spend. (AP PhotoAndy Wong)

SEOUL, South Korea -- South Korea’s professional baseball league says it will require fans to wear masks, sit at least a seat apart and prohibit them from eating food in the stands as it prepares to bring back spectators in the coming weeks amid the coronavirus epidemic. 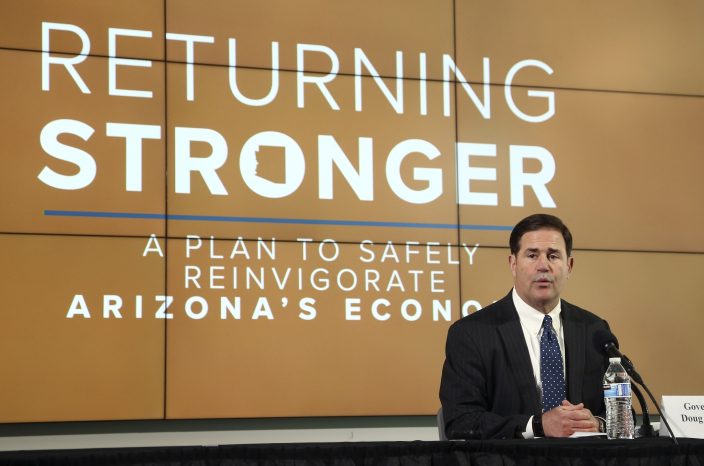 FILE - In this May 20, 2020, file photo, Arizona Gov. Doug Ducey speaks during a news conference in Phoenix to give the latest updates regarding the coronavirus. While the Republican governor has never discouraged the use of masks, his full-throated endorsement of them Monday, June 29, was a big change from a largely lukewarm stance the last few months. (AP PhotoRoss D. Franklin, Pool, File)

The Korea Baseball Organization said Tuesday that teams will be initially allowed to sell only 30% of the seats for each game. It said attendance could be expanded to as much as 50% depending on the progress in the country’s anti-virus efforts.

Fans will also be screened for fevers and discouraged from shouting, singing and cheering during the game. They will be able to buy tickets only with credit cards so that health authorities could easily locate them when needed. South Korea has been actively tracing the contacts of virus carriers using credit card information, cellphone location data and surveillance camera footage.

The KBO became one of the world’s first major sports competitions to return to action in May, but without fans in the stands. Seats have been covered with cheering banners, dolls or pictures of fans as teams tried to mimic a festive atmosphere.

DUBAI, United Arab Emirates — The island nation of Bahrain says it will cover 50% of the salaries of private-sector workers amid the coronavirus pandemic.

The island kingdom off Saudi Arabia in the Persian Gulf says the program will begin in July and covers “insured citizens employed in the private sector working for companies most affected by the coronavirus.”

The payments will go on for three months.

The kingdom says it also will cover electricity bills at employees’ homes.

Like other Gulf Arab nations, Bahrain has a large population of foreign workers. The kingdom’s announcement is among the most significant aid offered that covers those workers.

SEOUL, South Korea -- South Korea has reported 43 newly confirmed cases of COVID-19 from across the country as infections begin to spread beyond the greater capital area, which has been at the center of a virus resurgence since late May.

The figures announced by South Korea’s Centers for Disease Control and Prevention on Tuesday brought national totals to 12,800 cases, including 282 deaths. Seventeen of the new cases came from the Seoul metropolitan area, where about half of South Korea’s 51 million people live, while infections were also reported in other major cities such as Daejeon, Gwangju, Busan and Sejong.

Twenty of the new cases were linked to international arrivals as the coronavirus continues to strengthen its hold in Southern Asia, the United States and beyond.

Authorities in recent weeks have been struggling to track transmissions that have been popping up from various places as people increasingly venture out in public amid an erosion in citizen vigilance.

SALEM, Ore. — Gov. Kate Brown announced Monday that people throughout Oregon will be required to wear face coverings in indoor public spaces starting Wednesday to slow the spread of the coronavirus.

The guidance applies to businesses and members of the public visiting indoor public spaces, she said in a news release.

Face covering requirements were mandated in eight counties last week. Over the past month, Brown said the disease has spread at an alarming rate in both urban and rural counties.

Face coverings that cover the nose and mouth play a critical role in reducing the spread of the disease because droplets from people’s breath can carry the virus to others without people realizing it, she said.

She said she did not want to close businesses again as has happened in other states that are seeing a spike in cases. She said Oregon Occupational Safety and Health (OSHA) will take the lead in enforcing face covering requirements for all covered Oregon businesses.

TOPEKA, Kan. — Kansas Gov. Laura Kelly says she will issue an executive order mandating the use of masks in public starting Friday to stop the spread of COVID-19.

“The evidence could not be clearer — wearing a mask is not only safe, but it is necessary to avoid another shutdown,” the Democratic governor told reporters Monday.

Kelly’s executive order would require every Kansan to wear a mask if they are around other people. She said her administration will issue specific guidance later this week and will work with the attorney general’s office to implement the policy.

“”This is all we have to fight this virus and it is up to each of us to do our part,” Kelly said.

Kansas health officials reported on Monday at least 14,443 confirmed coronavirus cases, an increase of 905 since Friday. The state also had six more deaths from COVID-19, bring the total number of deaths in the state to 270. Kansas reported that 1,152 people had been hospitalized.

MIAMI — In South Beach, not wearing a mask could lead to a $50 fine starting Tuesday. Miami Beach Mayor Dan Gelber said the broader regulations, which include requiring masks when not able to socially distance, including outside, in condominium common areas and at hotels, will be punishable with a verbal warning or fine. A curfew is also being discussed.

“We don’t have too many tools left in our kit, and we don’t want to be forced to return to a shelter in place order that proved so economically devastating,” Gelber said, urging residents to comply.

The city will also dispatch ambassadors to congested areas to pass out free masks.

“To those of you who seem to believe that wearing a mask is a political statement — it is not. This virus couldn’t care who you support or what party you belong to,” said Gelber. “I don’t know the politics of the 13 seniors living here in South Beach and who recently perished.”

US votes against UN resolution condemning US embargo on ...

The United States voted against a ...