Lin-Manuel Miranda likes to picture the professor Mr. Howell, from “Gilligan’s Island,” saying the brag. You know the one. “Well, I saw it with the original cast.”

On Friday, Miranda will steal that boast from anyone who ever saw “Hamilton” in its initial, blistering run on Broadway. A live capture taken from two of the last performances with most of the original cast in June 2016 will premiere on Disney+, opening a new (and far less expensive) chapter in Miranda’s ever-evolving pop-culture phenomenon. In just a weekend, over Independence Day, more people will see “Hamilton” than ever before.

“There’s a part of me that just likes taking the brag away from people,” says Miranda, speaking from his home in Manhattan’s Washington Heights. “I wanted the world to have that brag.” 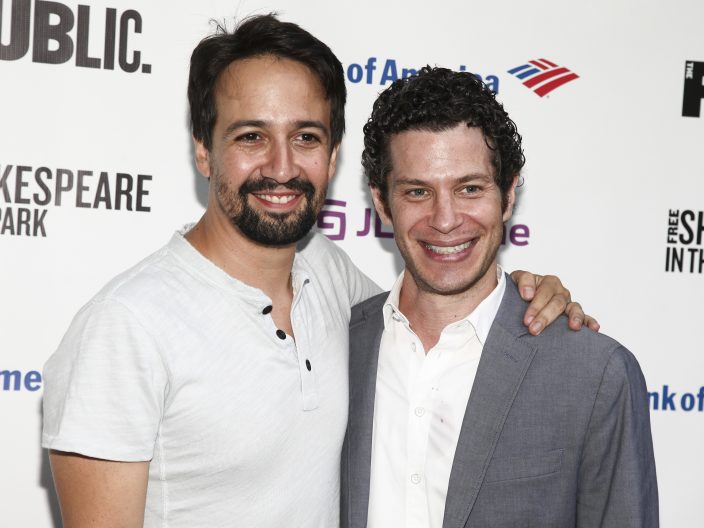 FILE - In this July 31, 2018 file photo, Lin-Manuel Miranda, left, and Thomas Kail attend the opening night of the Shakespeare in the Park production of Public Works' "Twelfth Night" in New York. A filmed version of Kail and Miranda's original Broadway production "Hamilton" will be available Friday, July 3, on Disney Plus. (Photo by Andy KropaInvisionAP, File)

“Hamilfilm,” as it’s been nicknamed, will land in homes just days after Broadway announced that its shutdown will continue through at least the end of the year due to the pandemic. Disney, which acquired the film for $75 million, will sacrifice whatever the box-office returns might have come for a major boost to its streaming service and a rush of virtual togetherness. With the stage all to itself, “Hamilton” arrives as a godsend to theatergoers now more than ever.

“That was a big reason we pushed up the release,” says Miranda of the film originally set to open in theaters in October 2021. “We need a reminder of how magical live theater is.”

One of the first things that hits you watching “Hamilton” is the sensation of being in the midst of applause, with a full house all around. Director Thomas Kail, who also shepherded the stage show, dispersed nine cameras and some 100 microphones around the Richard Rodgers Theatre to document two performances: a Sunday matinee and a Tuesday night show. Tracking and close-up shots were done in between. 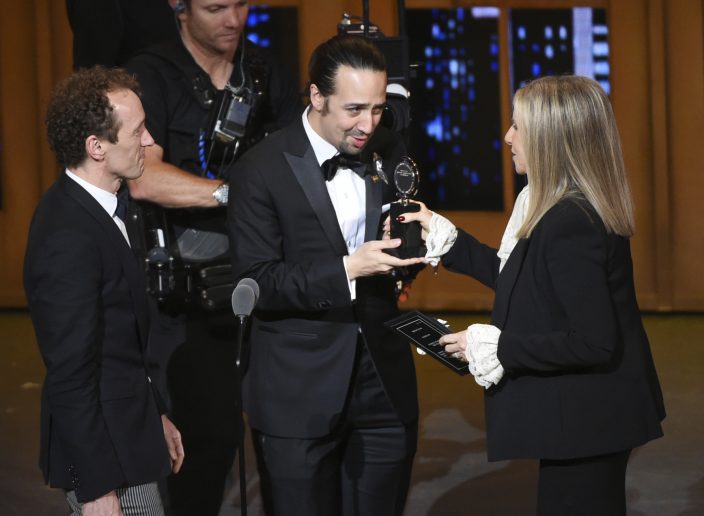 FILE - In this June 12, 2016 file photo Barbra Streisand, right, presents the award for best musical to Lin-Manuel Miranda, center, of "Hamilton," as producer Jeffrey Seller looks on at the Tony Awards in New York. A filmed version of the original Broadway production will be available Friday, July 3, on Disney Plus. (Photo by Evan AgostiniInvisionAP, File)

For Kail, who spoke by Zoom alongside Miranda, it means giving everyone the same seat — and a chance to dig even deeper into “Hamilton.”

“There’s a level of inspection of the show that can be quite different than the endorphin rush of watching it knowing that might be your one chance,” says Kail. “In some ways, this will allow it to settle because now it’s yours.”

Since “Hamilton” was first performed at the Public Theater on January 20, 2015, the words haven’t changed (though two expletives have been scrubbed to make the film PG-13). But as a rhyming, hip-hop omnibus of national history and identity, slavery and immigration, its power has resonated differently at different times. 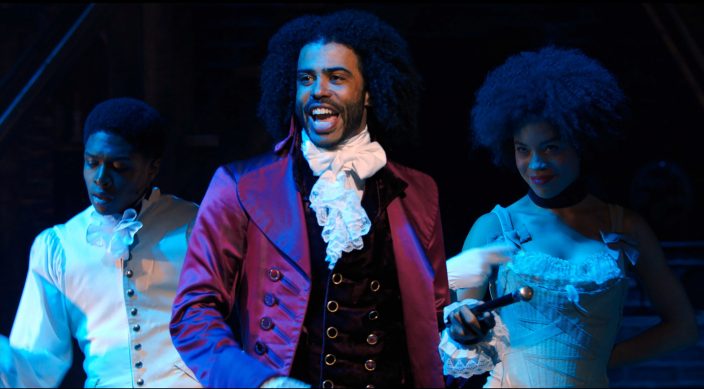 In this image released by Disney Plus, Daveed Diggs portrays Thomas Jefferson in a filmed version of the original Broadway production of "Hamilton." (Disney Plus via AP)

Now, the “Rise up!” verses of “My Shot” will sound to many like they’re channeling the protest spirit that has swept across the country since the death of George Floyd. “Hamilton” remains a story of revolution — a triumphant and tragic one told passionately by performers of color. Everyone who perishes in “Hamilton,” Miranda points out, dies from gun violence.

“Everything present at the founding is still present,” says Miranda. “When I am sitting still and listening right now, it’s to the young people who are leading these protests who are saying: This is what we stand for and this is what we won’t stand for. I’m struck by a section that was always treated as comic relief when the show first came out where there’s Samuel Seabury and he’s telling everyone to remain calm. And there’s Hamilton saying there’s nothing calm about what’s happening.”

“The revolution is coming,” Hamilton says. 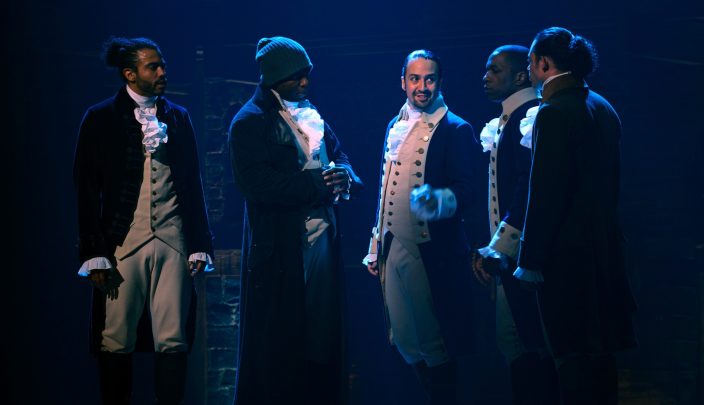 In this image released by Disney Plus, from left, Daveed Diggs, Okieriete Onaodowan, Lin-Manuel Miranda, Leslie Odom Jr. and Anthony Ramos appear in a filmed version of the original Broadway production of "Hamilton." (Disney Plus via AP)

“Hamilton” has already been woven into contemporary history. Miranda’s first performance of a piece of it came at Barack Obama’s White House. Ever since, the history-making musical been indelibly linked to the Obama era.

But just days after the election of Donald Trump, “Hamilton” took on a clearer aura of resistance. The show’s interaction with Mike Pence, then vice-president elect, and Donald Trumps subsequent mischaracterization in a series of tweets, Miranda considers “a very early glimpse of the Trump playbook.” Soon, the line “Immigrants, they get the job done” became a more pronounced rallying cry.

Kail can’t sit in the back of a theater to see how this version of “Hamilton” plays. There were no test screenings except for one a few weeks ago for the cast, including original members Daveed Diggs, Leslie Odom Jr., Jonathan Groff and Renée Elise Goldsberry. But through Disney's subscription streaming service, it will be out there — somewhere, everywhere — to meet another moment in American history.

For Miranda, it couldn’t come soon enough. He wanted the movie out, he says, as soon as he saw Kail’s first cut in late 2016.

“The conversation has always been: Have we played enough cities? Have we given enough people a chance to see the show live before releasing this?” says Miranda. “In a lot of ways, the question was answered for us.”

The captivation and celebration of ...

Limited COVID-19 testing? Researchers in Rwanda have an ...