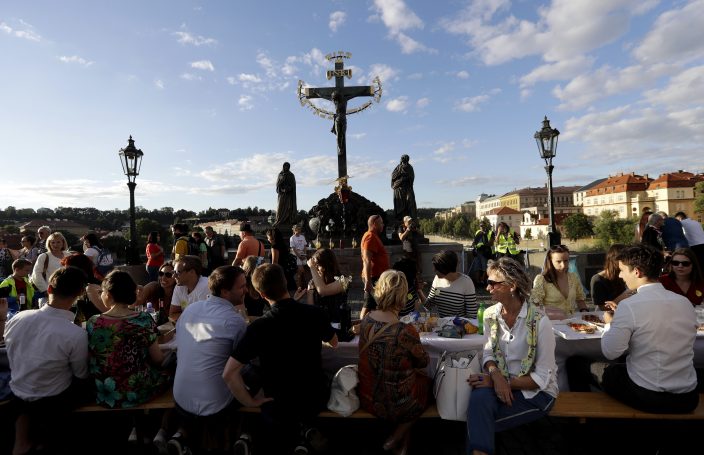 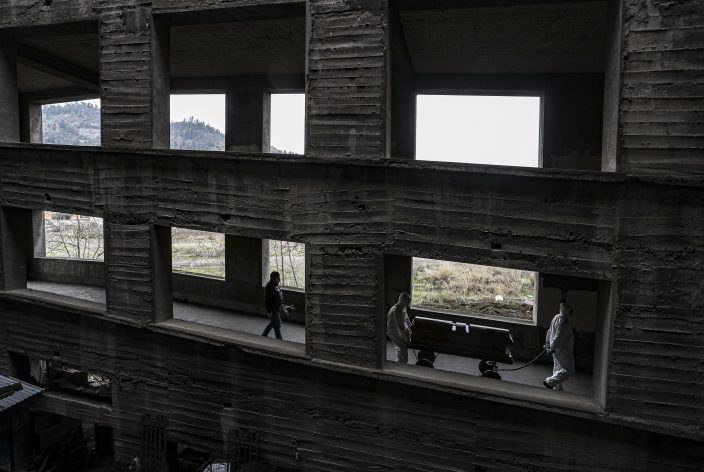 Gonzalo Zapata accompanies the coffin of his friend of 38 years Rodrigo Herrera who died from COVID-19 complications, at a Catholic Cemetery in Santiago, Chile, Tuesday, June 30, 2020. Herrera's family could not attend the funeral because they were infected with COVID-19. (AP PhotoEsteban Felix)

VIRUS OUTBREAK-NURSING HOMES — A coming report from Senate Democrats finds that the Trump administration was slow to comprehend the scale of COVID-19′s impact on nursing homes and a disjointed federal response only compounded the devastating toll. The report finds a lack of coordination among government agencies that has had ongoing consequences, such as issues with access to coronavirus testing and protective equipment. By Ricardo Alonso-Zaldivar. SENT: 740 words, photos. 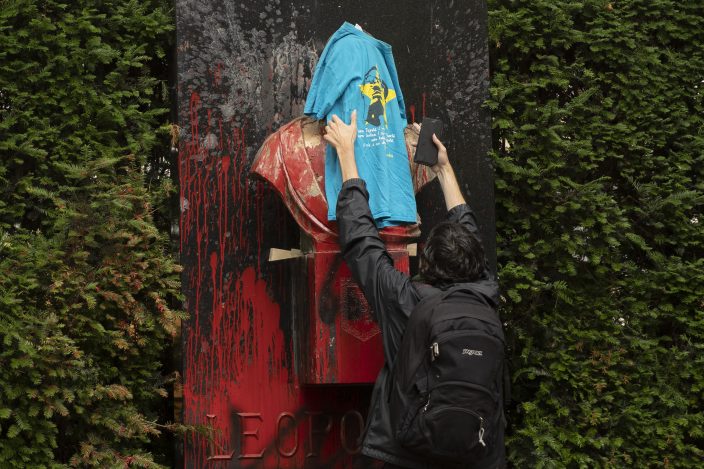 A man places a t-shirt with a screenprint of deceased Congolese leader, Patrice Lumumba, over the bust of Belgium's King Leopold II, which has been damaged by red paint and graffiti at a park in Ghent, Belgium on Tuesday, June 30, 2020. Protests sweeping the world after George Floyd's death in the U.S. have added fuel to a movement to confront Europe's role in the slave trade and its colonial past. Leopold II is increasingly seen as a stain on the nation where he reigned from 1865 to 1909 with some demonstrators calling for his removal from public view. (AP PhotoFrancisco Seco)

TRUMP’S TWO RUSSIAS — When it comes to Russia, the Trump administration just can’t seem to make up its mind. The dizzying, often contradictory, paths followed by President Donald Trump on the one hand and his hawkish but constantly changing cast of national security aides on the other have created confusion in Congress and among allies and enemies alike. By Diplomatic Writer Matthew Lee. SENT: 820 words, photos.

ELECTION 2020-TRUMP-MILITARY — The relationship between the nation’s military community and Trump has been strained repeatedly over his turbulent first term. And just four months before Election Day, real cracks are forming in the GOP’s longstanding alliance with veterans amid new reports that Trump either ignored, or was unaware of, a Russian plot to kill U.S. troops. By Steve Peoples and Sarah Blake Morgan. SENT: 910 words, photo. 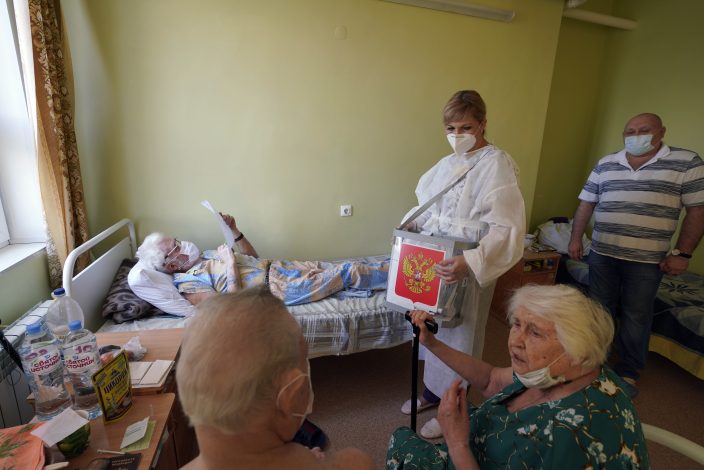 A medical worker, in white, wearing a face mask and gloves to protect against coronavirus, stands next to a patient waiting for his turn to vote, at the City Clinical Emergency Hospital in Voronezh, Russia, Tuesday, June 30, 2020. Polls opened in Russia on June 25 for a week-long vote on a constitutional reform that would allow President Vladimir Putin to stay in power until 2036. (AP PhotoAlexei Sazonov)

TRUMP-WHAT’S MISSING-ANALYSIS — Knock it off, Russia. Wear a mask, Americans. Systemic racism must end. None of these is a particularly bold or controversial message. But such words do not come easily to Trump — and his silence is contributing to the cascading crises that now engulf the White House. By Nancy Benac. SENT: 1,000 words, photos.

HONG-KONG-CHINA — Hong Kong police make their first arrest under a new national security law imposed by China’s central government, arresting a protester for carrying a flag calling for Hong Kong’s independence. The man was arrested after police say they had issued multiple warnings to the crowd at a protest in the city’s Causeway Bay shopping district that they might be in violation of the law. By Zen Soo. SENT: 1,180 words, photos. With TAIWAN-HONG KONG — Taiwan opens Hong Kong migration office in rebuke to Beijing.

RUSSIA-CONSTITUTIONAL VOTE — Russian President Vladimir Putin’s main political project of the year — a constitutional vote that would allow him to extend his rule until 2036 — draws closer to completion as Russia holds a nationwide ballot. By Vladimir Isachenko. SENT: 1,070 words, photos. 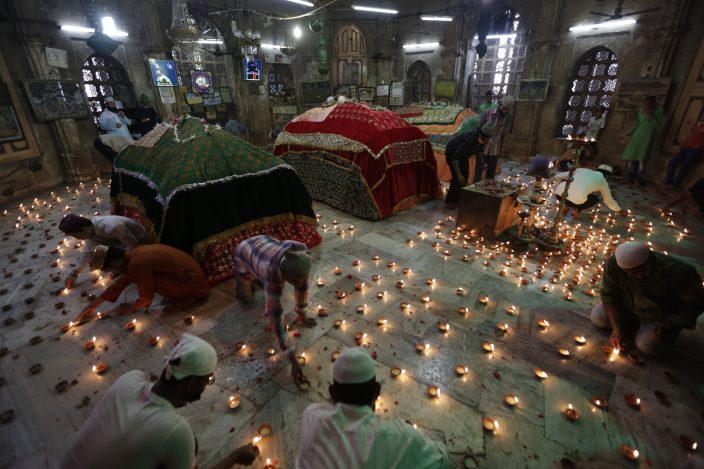 Indian Muslims light lamps before offering prayers for the protection against COVID-19 at Badshah no Hajiro or King's Mausoleum in Ahmedabad, India, Tuesday, June 30, 2020. Indian Prime Minister Narendra Modi said in a live address Tuesday that the country's coronavirus death rate is under control, but that the country is at a "critical juncture." (AP PhotoAjit Solanki)

RACIAL INJUSTICE-POLICE TAKEDOWN — Body camera video shows Antonio Arnelo Smith handing his driver’s license to a Black police officer and answering questions cooperatively before a white officer walks up behind him, wraps him in a bear hug and slams him face-first to the ground. By Russ Bynum. SENT: 740 words, photos, video. With RACIAL-INJUSTICE-TEXAS — Five officers investigated over use of force at Austin protests; RACIAL INJUSTICE-FLORIDA — White Florida officer charged in shoving of Black woman. 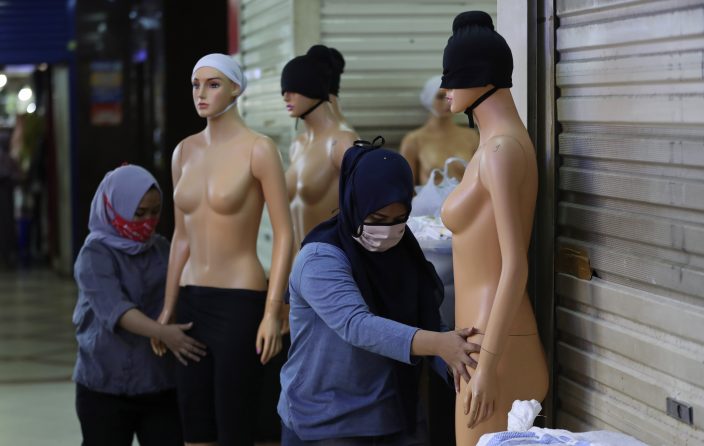 VIRUS OUTBREAK-LEBANON EXPATRIATES — With Beirut’s airport partially reopening from a three-month virus shutdown, the government is hoping thousands of Lebanese expatriates will return for the summer — and bring dollars desperately needed to prop up the crashing economy. SENT: 1,010 words, photos. With VIRUS OUTBREAK-THE LATEST.

VIRUS OUTBREAK-ASIA — Thailand begins a fifth phase of relaxations of COVID-19 restrictions, allowing the reopening of schools and high-risk entertainment venues such as pubs and massage parlors that had been shut since mid-March. SENT: 700 words, photos.

VIRUS OUTBREAK-TIMBUKTU — COVID-19 has made its way to Timbuktu, whose name has long been synonymous with the ends of the Earth.

ELECTION 2020-VIRUS SPREAD — The new coronavirus first hit Democratic areas, ravaging big cities and coastal areas, but the virus’ second surge is now tearing through Republican areas and places Trump won in 2016, according to an AP analysis that suggests the political divide on the virus may be shifting. SENT: 780 words, photo, graphics.

VIRUS OUTBREAK-MASK POLITICS — In Republican circles — with the notable exception of the man who leads the party — the debate about masks is over: It’s time to put one on. SENT: 920 words, photos.

BELGIUM-COLONIAL PAST-LAWSUITS — Five women who were taken from their families as children in Belgian Congo and placed in a religious mission run by Catholic nuns have filed a lawsuit seeking reparations from Belgium. SENT: 1,030 words, photos.

RACIAL-INJUSTICE-NIGHTCLUB-BUDDHAS — America’s nightclubs are largely closed because of the coronavirus pandemic, but that isn’t stopping an interfaith coalition from launching a campaign to stop what organizers call the “disrespectful” use of sacred Buddhist and Hindu statues as decor. SENT: 620 words, photos.

VENEZUELA-GOLD CLAIM — The political battle over control of Venezuela turns to a $1 .8 billion stack of gold bars sitting in the Bank of England’s vault in London, where a judge is expected to decide soon on who has the rightful claim to the bullion. SENT: 740 words, photos.

CHINA-ECONOMY — China’s economy has reopened but retailers, restaurants and other businesses that employ millions of people are struggling to lure back consumers who worry about the virus and possible job losses. By Business Write Joe McDonald. SENT: 1,000 words, photos.

MINOR LEAGUE SEASON CANCELED — Baseball’s minor leagues cancel their seasons because of the coronavirus pandemic, and the head of their governing body says more than half of the 160 teams were in danger of failing without government assistance or private equity injections. By Baseball Writer Ronald Blum. SENT: 610 words, photo.

Curfew in parts of Kashmir ahead of revocation annivers ...

Authorities clamped a curfew in ma ...