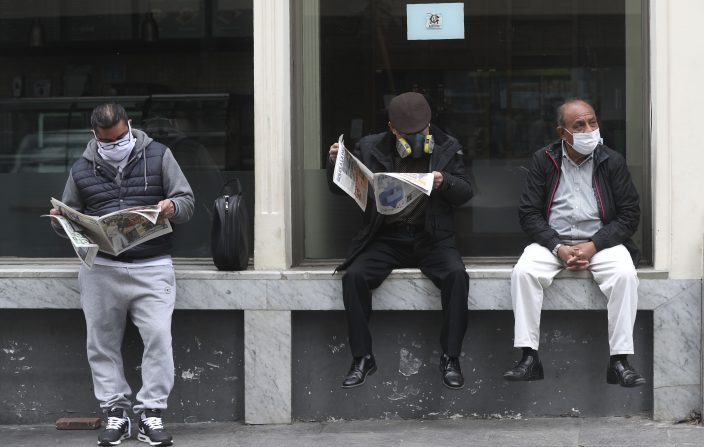 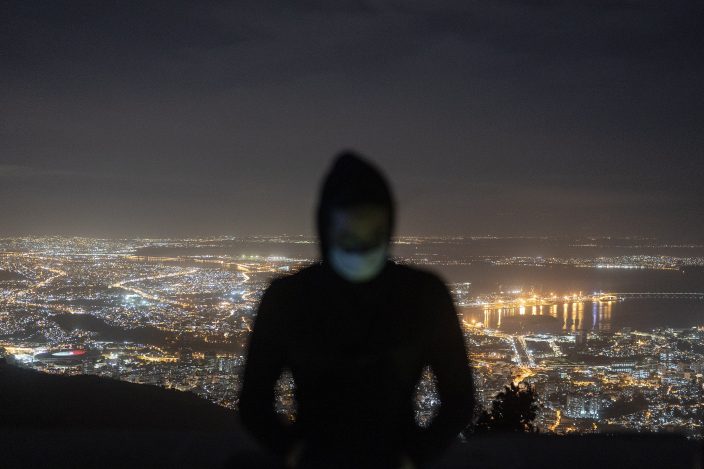 Wearing a protective mask to curb the spread of the new coronavirus a man attends a memorial for those who have died from COVID-19 worldwide, at Rio's Christ the Redeemer statue in Rio de Janeiro, Brazil, Wednesday, July 1, 2020. (AP PhotoLeo Correa) 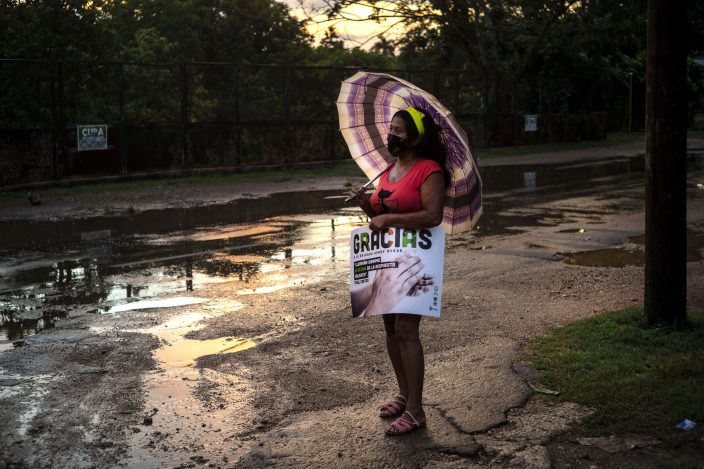 A woman waits in the rain for the arrival of the Cuban medical brigade of the Henry Reeve Contingent, in Havana, Cuba, Wednesday, July 1, 2020. The brigade returned to the island after helping with the COVID-19 emergency in Andorra. (AP PhotoRamon Espinosa)

VIRUS OUTBREAK-BARS — Authorities are closing honky tonks, bars and other drinking establishments in some parts of the U.S. to stem the surge of COVID-19 infections — a move backed by sound science about risk factors that go beyond wearing or not wearing masks. In the words of one study, it comes down to the danger of “heavy breathing in close proximity.” By Medical Writer Carla K. Johnson. SENT: 860 words, photos, video.

RACIAL-INJUSTICE-BLACK-BUSINESSES — Black-owned businesses are enjoying a surge in support amid the national reckoning on racism sparked by George Floyd’s killing in Minneapolis. But the increased demand hasn’t been without growing pains for some. Black-owned bookshops in Boston and elsewhere have received backlash as they’ve struggled to keep up with demand. At the same time, Black owners hope the sales boom isn’t a passing fad but leads to lasting change. By Philip Marcelo. SENT: 970 words, photos.

TRUMP-ANALYSIS — Four months from Election Day, Democrats are increasingly arguing that President Donald Trump’s handling of multiple crises facing the country shows he is ill-equipped for the job. The questions about Trump’s competency have gotten louder following revelations that he didn’t read at least two written intelligence briefings indicating that Russia may have paid bounties to the Taliban for the deaths of Americans in Afghanistan. By Washington Bureau Chief Julie Pace. SENT: 1,020 words, photos. 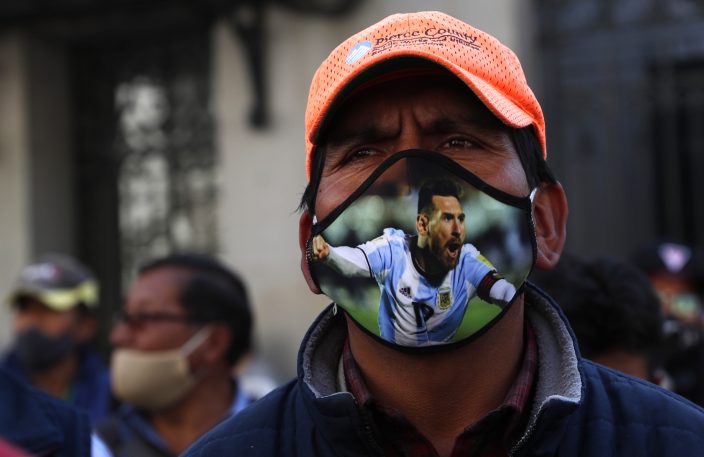 A public transport driver, wearing a protective face mask emblazoned with an image of Lionel Messi, attends a protest demanding an increase in fares because quarantine measures to curb the spread of the new coronavirus have decreased his income, in La Paz, Bolivia, Wednesday, July 1, 2020. (AP PhotoJuan Karita)

SUDAN-FGM BAN — Sudan’s transitional government is preparing to outlaw female genital mutilation. Activists and survivors are praising the move but say it will still be a long fight to end the deeply entrenched practice. By Samy Magdy and Mariam Fam. SENT: 1,130 words, photos. 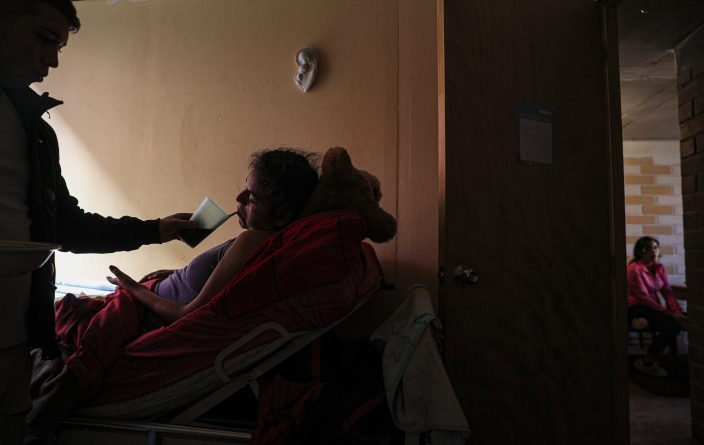 Unemployed Rodrigo Faundez holds a glass filled with soda for his mother as she takes a sip after feeding her a vegetable noodle soup he brought home from a "community kitchen", in the San Bernardo neighborhood of Santiago, Chile, Wednesday, July 1, 2020. Coronavirus lockdown measures are having a devastating effect on Chile's economy which contracted 15.3% in May, the worst decline since economic records were first kept. (AP PhotoEsteban Felix)

VIRUS OUTBREAK-SOUTH AFRICA-TOBACCO BAN — South Africa is three months into a ban on the sale of cigarettes and other tobacco products, an unusual tactic employed by a government to protect the health of its citizens during the coronavirus pandemic. SENT: 830 words, photos. 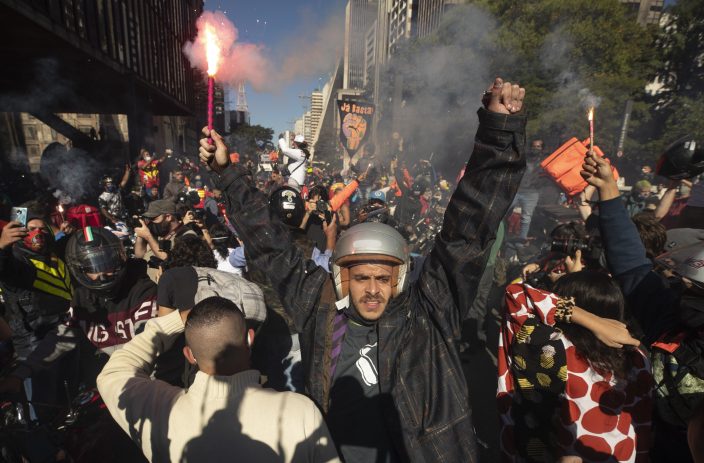 VIRUS OUTBREAK-VIRAL QUESTIONS-MASKS — Does wearing a mask pose any health risks? No, not for most people. SENT: 320 words, photo. 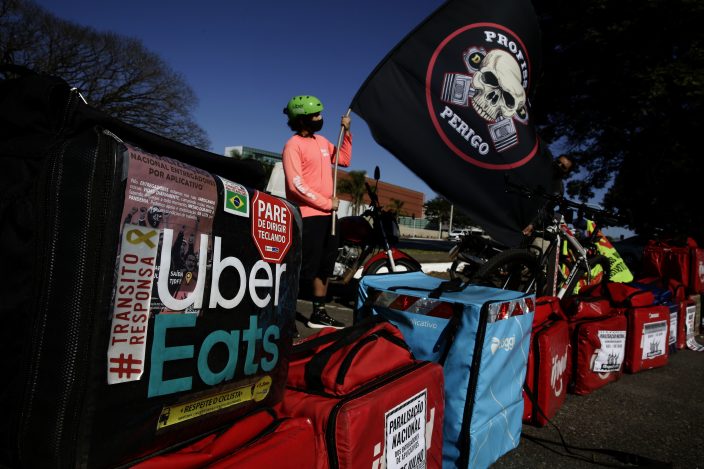 A delivery worker waves a flag with the Portuguese message: "Dangerous Profession" during a protest demanding better working conditions for people who work for app-based food delivery services in Brasilia, Brazil, Wednesday, July 1, 2020. Delivery workers insist they are the ones who provided food for people while most of the population remains in quarantine to curb the spread of COVID-19, but their job hasn't been respected and they haven't been treated as essential workers. (AP PhotoEraldo Peres)

VIRUS OUTBREAK-ATLANTIC CITY CASINOS — For the first time in 108 days, slot machines will beep, dice will tumble and cards will be dealt at Atlantic City’s casinos as they reopen amid a coronavirus pandemic that has drastically changed things both inside and outside the casino walls. SENT: 670 words, photos. 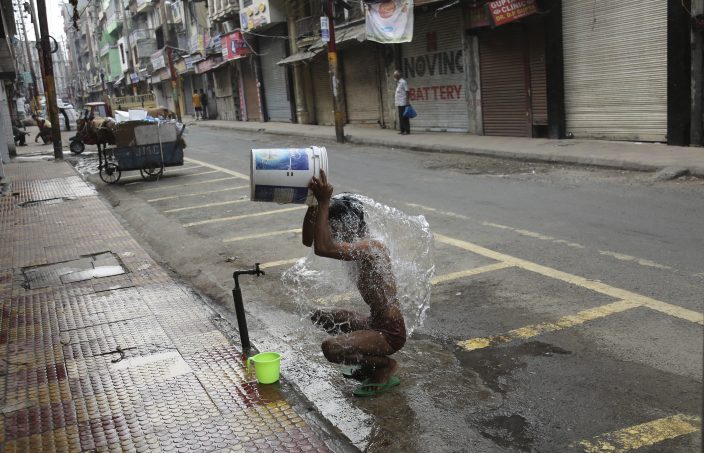 A laborer bathes by the side of a road in Jammu, India, Wednesday, July 1, 2020. Indian Prime Minister Narendra Modi said in a live address Tuesday that the country's coronavirus death rate is under control, but that the country is at a “critical juncture.” Since the lockdown was lifted, the caseload has shot up, making India the world's fourth-worst affected country. (AP PhotoChanni Anand)

RACIAL INJUSTICE-FLORIDA — Florida police officers can be heard laughing and celebrating after shooting protesters with rubber bullets during a May protest against police brutality, according to newly released body camera footage. SENT: 400 words, photos.

UNITED STATES-RUSSIA — Trump and his top national security officials are stepping up their defense of his response to intelligence assessments that suggested Russia had offered bounties for killing U.S. troops in Afghanistan. SENT: 1,070 words, photos, video.

IMMIGRATION-ASYLUM BAN — A federal judge knocks down a cornerstone border policy of the Trump administration that denies asylum to people who travel through other countries to reach the U.S.-Mexico border without first seeking protection in those countries. SENT: 510 words, photos.

RUSSIA-CONSTITUTIONAL VOTE — Almost 78% of voters in Russia have approved amendments to the country’s constitution that will allow President Vladimir Putin to stay in power until 2036, Russian election officials say after all the votes were counted. SENT: 340 words, photos.

NOVARTIS-LAWSUIT-SETTLEMENT — Novartis Pharmaceutical Corp. will pay $678 million to the U.S. government and various states to settle a lawsuit over a sham speaker program that distributed cash, expensive dinners and other treats to induce doctors to prescribe its products, federal authorities announce. SENT: 430 words.

F1-AUSTRIAN GP — Four months after the opening race was called off at the last minute, the Formula One season finally gets underway this weekend on another continent and in a different-looking world. By Auto Racing Writer Jerome Pugmire. SENT: 770 words, photos.