Bethany Balcer didn't come to the National Women's Soccer League by way of a powerhouse college program like North Carolina or Stanford. She didn't have a national team history and wasn't a draft pick.

Balcer is soccer's version of a walk-on wonder, forging her own path to the OL Reign.

The winner of last season's league Rookie of the Year award has a starting role for the Reign as they navigate the Challenge Cup, the league's tournament in Utah. 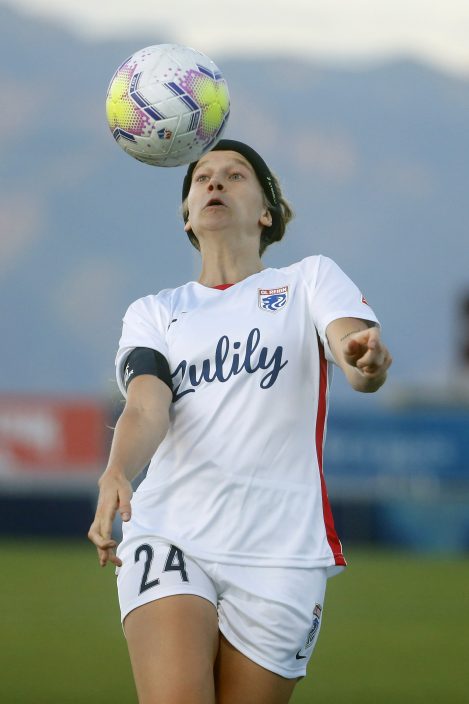 OL Reign forward Bethany Balcer (24) controls the ball during the first half of an NWSL Challenge Cup soccer match against the Sky Blue FC at Zions Bank Stadium on Tuesday, June 30, 2020, in Herriman, Utah. Balcer didn't come to the National Women's Soccer League by way of a powerhouse college program like North Carolina or UCLA. She didn't come to the league with a national team history or as a top draft pick, either. Balcer forged her own path to OL Reign. (AP PhotoRick Bowmer)

The Reign played to a 0-0 draw with Sky Blue in their opening match Tuesday. The team faces the Houston Dash on Saturday night as the group stage continues.

Against Sky Blue, Balcer started on the wing, although she's also comfortable at center forward.

“There are things I like about both positions. I’m just trying to get comfortable with both and as good at both as best I can. I feel like I can be dangerous with my speed on the wing, but also as the nine. So I’m kind of back and forth,” she said. “I just want to be useful wherever the team needs me.”

Balcer, who is from Hudsonville, Michigan, went to tiny Spring Arbor University, a private school in her home state that plays soccer at the NAIA level.

She started all four years at school, earning NAIA Player of the Year honors in three seasons and helping the Cougars to two national championships during her tenure.

She played for a couple of club teams but got her break when the Reign invited her to preseason training camp. She impressed then-coach Vlatko Andonovski last year and won a contract, becoming the first NAIA player to sign with an NWSL club.

Pushed into a bigger role because of injuries and World Cup absences, Balcer made the most of her opportunities and became the team's scoring leader last season with six goals and two assists. She was the only player on the team to appear in every regular season match.

“I attribute a lot of my success last year to Vlatko. Just his decision to even take a chance on me in the first place says a lot about who he is as a coach and his desire to develop players and make them the best they can be," she said on a video conference with reporters. “He really gave me a lot of confidence last year just by putting me in the role he did and entrusting me with that responsibility in that way. I think that gave me confidence on the field that allowed me to just do what I do and just play how I play.”

Andonovski regularly praised Balcer last season, calling her one of the individual success stories of the league.

“We trusted her. We believed in her abilities,” he said last fall. “We did everything to help her thrive in the environment.”

But Andonovski left the Reign after the playoffs to become head coach of the U.S. national team. He replaced Jill Ellis, who stepped down after leading the U.S. to its second straight World Cup title.

There were more changes in store for the franchise. The team was purchased by OL Groupe, the parent company of French powerhouse Olympique Lyonnais, and was rebranded OL Reign.

At the Challenge Cup, the Reign are playing without star Megan Rapinoe, who opted out of the tournament. But they still have plenty of intriguing talent, including newcomers Shirley Cruz and Sophia Huerta.

Balcer hopes her story is an inspiration to young women who might not have the traditional credentials but still love to play.

“I just also hope that it opens up coaches' perspectives and ideas of where quality players come from, because they are out there, just might take a little more work," she added. “And I hope that more of those girls are seen."