Cameron Champ lathered up his hands with sanitizer as he made the turn in the Rocket Mortgage Classic, trying to stay healthy enough to keep competing.

“I use it as much as I see it out there," he said after shooting a 3-under 69, putting him four shots back after the opening round.

Champ was added to the field at the Detroit Golf Club under a modified PGA Tour policy that allows players who test positive for the coronavirus to be eligible if they had no symptoms and get two negative test results at least 24 hours apart. 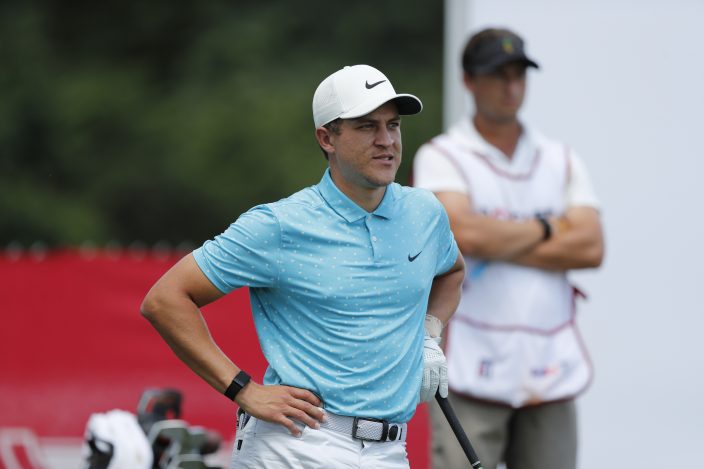 Cameron Champ waits to drive on the 10th tee during the first round of the Rocket Mortgage Classic golf tournament, Thursday, July 2, 2020, at the Detroit Golf Club in Detroit. Champ was cleared to join the field at the Rocket Mortgage Classic under a modified PGA Tour policy that allows players who test positive for the coronavirus to be eligible if they had no symptoms and get two negative test results at least 24 hours apart. (AP PhotoCarlos Osorio)

Champ, however, said he does not believe he ever had COVID-19.

“Through the specialist that we worked with, at this point it’s clear that I never had it," he said. “Still being precautious because if I happen to do get it, then it affects my family deeply."

The decision to let Champ play on the eve of the tournament was the latest change to an evolving “Health and Safety Plan” as the tour enters its fourth week back from the pandemic-induced shutdown. Champ is among six players and two caddies on the PGA Tour who have tested positive.

Ricky Elliott, the caddie for Brooks Koepka, tested positive before the Travelers Championship last week in Connecticut, and then had a negative test. Webb Simpson said the same thing happened to one of his daughters, who tested positive initially before another test was negative.

The tour said after several asymptomatic positive tests that were followed by a negative test, it consulted with the CDC and is moving to a test-based model. Previously, the PGA Tour relied on time-based protocols that required those who test positive to self-isolate for at least 10 days.

Champ tested positive on June 23 and withdrew from the Travelers Championship. The tour said he had three negative tests over the 72 hours. After flying from Houston on Thursday morning, he was tested again in Detroit and was cleared to play.

“It was definitely a little shaky start, but like I said, it was last minute to be playing," he said.