NEW DELHI — India reported another single-day record high of new virus cases Friday while its monuments like the Taj Mahal will reopen for tourists next week.

With the current rate of infections, India is expected to surpass Russia’s 660,000 cases in coming days and become the third worst-hit country after the United States and Brazil. It has the eighth-most fatalities in the world, according to a Johns Hopkins University tally, but both numbers are thought to be far higher than has been confirmed around the world. 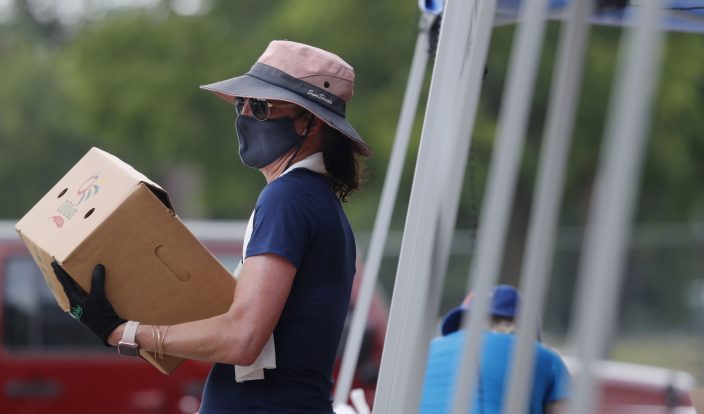 Wearing a mask amid concerns of the spread of COVID-19, a volunteer carries a box during a drive through food pantry distribution by Catholic Charities in Dallas, Thursday, July 2, 2020. (AP PhotoLM Otero)

After a strict two-month lockdown, India has eased its restrictions in most of the country except for the highest-risk areas.

The Culture Ministry decided to reopen all monuments Monday with a cap on the number of visitors and mandatory masks.

— With quarantine, Paraguay controls virus while its neighbors struggle

— How California went from success story to virus hot spot

— Virus concerns grow along with crowds at Jersey Shore

AUSTIN, Texas — The Texas GOP is moving ahead with a three-day convention in Houston, one of the nation’s coronavirus hotspots, over opposition from doctors and some local party activists.

Party leaders voted Thursday night to stick with an in-person gathering starting July 16. The event is typically one of the largest political conventions in America, drawing thousands of attendees, and some supporters suggested that changing plans is not what President Donald Trump would want.

The vote came hours after Republican Gov. Greg Abbott issued a statewide mask order as COVID-19 hospitalizations in Texas set another high Thursday. Hospitals in Houston have warned they are becoming stretched and the Texas Medical Association has called for cancelling the convention, saying now was not the time to pack thousands of people indoors.

Houston Mayor Sylvester Turner, a Democrat, has left the decisions about the convention up to the GOP. Abbott has also not taken a position on whether his party should go forward with meeting in person.

Victoria state Premier Daniel Andrews said suburbs with more than five cases and a high infection rate could be added to the 36 suburbs that have been locked down since Wednesday.

Sydney, Australia’s largest city, said a man who recently tested positive had been working in a Balmain supermarket.

Around 50 supermarket staff have gone into isolation. Health authorities have urged people who have visited the supermarket and show symptoms to be tested.

SEOUL, South Korea -- South Korea has reported 63 newly confirmed cases of COVID-19 as health authorities scramble to mobilize public health tools to the southwestern city of Gwangju, where more than 50 people were found sickened over the past week.

The figures announced by the Korea Centers for Disease Control and Prevention on Friday brought the national caseload to 12,967 infections, including 282 deaths.

Thirty-one of the new cases were reported from the Seoul metropolitan area, which has been at the center of a virus resurgence since late May.

Six of the new cases came from Gwangju, where officials have raised concern over possible shortages in hospital capacities, while 13 of them came from the southeastern city of Daegu, which had been the epicenter of a major outbreak in February and March.

The municipal government of Gwangju, which had one of the smallest caseloads among major South Korean cities before this week, has shut hundreds of schools and banned gatherings at wedding halls, banquet facilities and senior welfare centers to stem the transmissions.

Neighboring provinces are providing dozens of hospital beds and planning to send medical personnel to help Gwangju deal with the spike of infections.

Despite the warning, Kim reaffirmed North Korea’s claim to not have had a single case of COVID-19, telling a ruling party meeting Thursday that the country has “thoroughly prevented the inroad of the malignant virus” despite the worldwide health crisis.

Describing its anti-virus efforts as a “matter of national existence,” North Korea earlier this year shut down nearly all cross-border traffic, banned tourists and mobilized health workers to quarantine anyone with symptoms. Experts say the country’s self-imposed lockdown is hurting an economy already battered by stringent U.S.-led sanctions over its nuclear weapons and missile program.

The Korean Central News Agency said Kim during the politburo meeting of the Workers’ Party “stressed the need to maintain maximum alert without a slight self-complacence or relaxation” as the virus continues to spread in neighboring countries.

The agency said Kim sharply criticized inattentiveness among officials and violations of emergency anti-virus rules and warned that a “hasty relief of anti-epidemic measures will result in unimaginable and irretrievable crisis.”

SACRAMENTO, Calif. — Gov. Gavin Newsom urged Californians to turn to their “better angels” and use common sense by wearing masks and skipping traditional gatherings with family and friends during the holiday weekend.

California had been on a good trajectory with its virus efforts until mid-June, but infections and hospitalizations are now rising rapidly in many parts of the state.

Los Angeles and 18 other counties with the most troubling virus increases have been forced to shutter bars, forbid inside restaurant dining and close movie theaters.

Dr. Mark Ghaly, the state’s top health official, called the Fourth of July holiday weekend a “big deal” for efforts to contain the virus. He urged people to behave differently than they did on Memorial Day weekend, when many gathered socially. Authorities say that behavior helped spur the latest surge of cases.

“This is another time for Californians to pay attention to what happened over the last month and make a different set of decisions now,” he said.

BEIJING — China reported five new cases of coronavirus, two of them in the capital Beijing and three brought from outside the country, according to the National Health Commission.

No new deaths were registered Friday, leaving the toll at 4,634 among 83,542 total cases of COVID-19 reported since the virus was first detected in the central city of Wuhan late last year. Another 103 people were in isolation being monitored as suspected cases or for having tested positive for the virus without showing symptoms.

Strict quarantine, social distancing and case tracing measures have helped radically bring down infections. Mask wearing is still universal in indoor spaces, while many venues also require proof on a mobile phone app that the person is healthy. Even with the opening of the economy, however, millions are faced with job losses and government assistance has been limited due to already massive levels of debt.