Myanmar leader Aung San Suu Kyi expressed sadness Friday over a landslide at a jade mining site in the country’s north that took at least 166 lives, blaming the tragedy on joblessness.

Suu Kyi, speaking on a scheduled Facebook Live broadcast with representatives of the construction industry, bemoaned what she described as the need for people to illegally sift for jade because they lacked other ways of making a living.

Those killed in the accident Thursday in Hpakant in Kachin state had settled next to a mining site to sift for bits of jade left over after heavy machinery excavated the ground and left behind huge mounds of discarded earth. 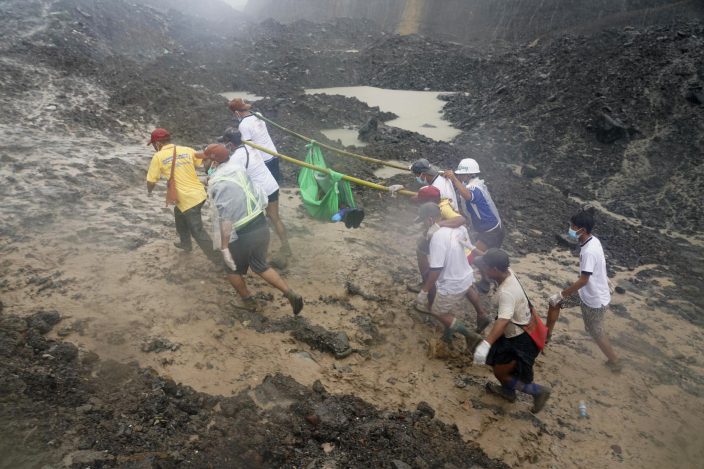 People use poles to carry a recovered body shrouded in green plastic Friday, July 3, 2020 in Hpakant, Kachin State, Myanmar. More than 100 people were killed Thursday in a landslide at a jade mine in northern Myanmar, the worst in a series of deadly accidents at such sites in recent years. (AP PhotoZaw Moe Htet)

The mounds become unstable during the rainy season and slide down on the informal miners settled below, as occurred Thursday and has happened repeatedly in recent years.

The Myanmar Fire Services Department, which coordinates rescue and emergency services, announced Friday that there were 166 deaths from the accident, an increase of four over Thursday’s total. It earlier announced that 54 injured people had been hospitalized.

Bo Saung, a village administrator in Hpakant, told The Associated Press on Friday that more bodies remained to be retrieved, giving an estimate of 50. 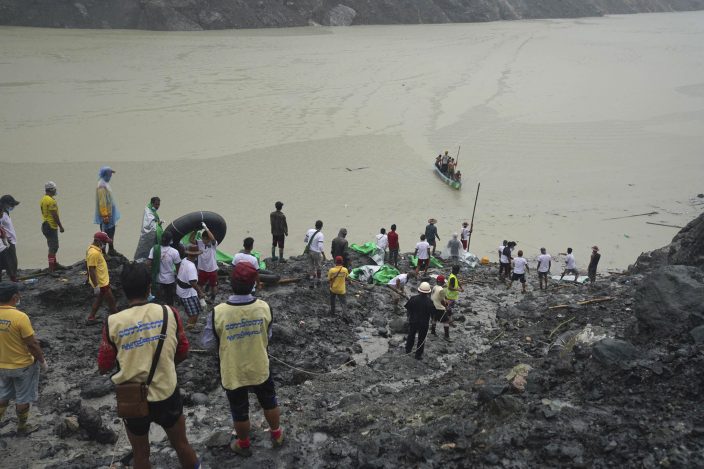 A small boat with people onboard approaches an area where bodies are recovered Friday, July 3, 2020, in Hpakant, Kachin State, Myanmar. More than 100 people were killed Thursday in a landslide at a jade mine in northern Myanmar, the worst in a series of deadly accidents at such sites in recent years.(AP PhotoZaw Moe Htet)

The death toll already surpasses that of the previous worst such accident, in November 2015 when at least 113 people were killed.

Hpakant, a remore area 950 kilometers (600 miles) north of Myanmar’s biggest city, Yangon, is the center of the world’s biggest and most lucrative jade mining industry. The most detailed estimate of Myanmar’s jade industry, made by the environmental watchdog group Global Witness, said it generated about $31 billion in 2014.

Suu Kyi said most of those killed Thursday were illegal miners. She said that shows it is difficult for the country’s citizens to get legal jobs, and that generating jobs should be a priority.

However, critics place the blame for such accidents on the legal mining operators and the government’s lax enforcement of safety measures.

London-based Global Witness called the landslide “a damning indictment of the government’s failure to curb reckless and irresponsible mining practices.”

It charged that Myanmar’s jade mining sector “is dominated by powerful military-linked companies, armed groups and cronies that have been allowed to operate without effective social and environmental controls for years.”

It singled out for blame the civilian government of Suu Kyi’s National League for Democracy party, which came to power in 2016.

“Five years after taking office and pledging to reform the corrupt sector, the National League for Democracy (NLD) has yet to implement desperately needed reforms, allowing deadly mining practices to continue and gambling the lives of vulnerable workers in the country’s jade mines,” Global Witness said in a statement Thursday. “Neither a promised new gemstone law, passed by parliament in 2019, nor a gemstone policy that has been in production for several years have yet been implemented.”

U.N. Secretary-General Antonio Guterres expressed deep sadness at the deaths and sent condolences to families of the victims and Myanmar’s government and people.

Gutteres expressed “the readiness of the United Nations to contribute to ongoing efforts to address the needs of the affected population,” said his spokesman, Stephane Dujarric.

Landslide at Myanmar jade mine kills at least 113 people