Indian Prime Minister Narendra Modi made an unannounced visit Friday to a military base in a remote region bordering China where troops from the two countries have been facing off for nearly two months.

Modi, accompanied by India’s military leadership, interacted with troops in Ladakh region. A photo on his Instagram account showed him sitting in a camouflage tent at the base. "Interacting with our brave armed forces personnel,” he wrote.

Modi’s visit comes in the backdrop of a massive Indian army buildup in Ladakh following hand-to-hand combat between Indian and Chinese soldiers on June 15 that left 20 Indians dead and dozens injured in the Galwan Valley, the worst confrontation in over four decades between the Asian giants. 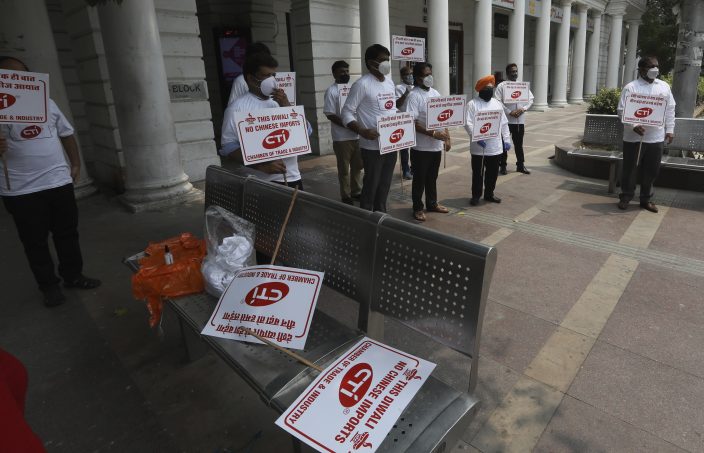 Indian traders hold banners for the boycott of Chinese goods during a protest in New Delhi, India, Friday, July 3, 2020. Indian Prime Minister Narendra Modi made an unannounced visit Friday to a military base in remote Ladakh region bordering China where the soldiers of the two countries have been facing off for nearly two months. Modi’s visit comes in the backdrop of massive Indian army build-up in Ladakh region following hand-to-hand combat between Indian and Chinese soldiers on June 15 that left 20 Indian soldiers dead and dozens injured, the worst military confrontation in over four decades between the Asian giants. (AP PhotoManish Swarup)

Indian officials say there were casualties on the Chinese side as well, but there has been no confirmation by Beijing.

Modi chanted “Long live mother India!” while addressing troops at the Nimu military base, insisting that “after every crisis, India has emerged stronger.”

He praised the valor of Indian soldiers and said: “Enemies of India have seen your fire and fury.”

“Days of expansionism are over. Expansionism creates danger for world peace. This is an era of development. Expansionist force have either lost or forced to turn back,” he said in an oblique reference to China.

Both India and China have provided little information officially, but media in the two countries have given large coverage to the escalating tensions, much of it replayed on television news channels and social media.

The leader of Modi's Hindu nationalist Bharatiya Janata Party, B.L. Santhosh, tweeted Friday that the visit was a “big, big booster to soldiers morale. He leads from front.”

Modi has faced public pressure for a stern response to Chinese actions along the contested frontier.

Indian protesters have been calling for a boycott of Chinese goods. On Monday, the government banned 59 Chinese-owned apps, including TikTok, citing privacy concerns that it said pose a threat to India’s sovereignty and security. The ban was largely symbolic since the apps can’t be automatically erased from devices where they are already downloaded.

They say the soldiers ignored repeated verbal warnings, triggering a yelling match, stone-throwing and even fistfights in at least one place along the Pangong Lake, the site of several such confrontations in the past.

But the situation turned deadly when the rival troops engaged in a nightly medieval clash in the Galwan Valley, where India is building a strategic road connecting the region to an airstrip close to China.

According to Indian officials, Chinese troops atop a ridge at the mouth of the narrow valley threw stones, punched and pushed Indian soldiers down a ridge at around 4,500 meters (15,000 feet.)

Since then, India has sent huge reinforcements of soldiers, military equipment and fighter jets into the already highly militarized area.

The disputed border covers nearly 3,500 kilometers (2,175 miles) of frontier that the two countries call the Line of Actual Control and that stretches from Ladakh in the north to the Indian state of Sikkim in the northeast.

India and China fought a border war in 1962 that also spilled into Ladakh. The two countries have been trying to settle their border dispute since the early 1990s, without success.

India unilaterally declared Ladakh a federal territory while separating it from disputed Kashmir in August 2019, ending the territory’s semi-autonomous status and straining the already prickly relationship between New Delhi and Beijing. China was among the countries to strongly condemn the move, raising it at international forums including the U.N. Security Council.

Several rounds of military and diplomatic talks to end the current crisis in Ladakh have been unsuccessful.