A special prosecutor was appointed in Switzerland on Friday to assess complaints about alleged criminal conduct when attorney general Michael Lauber had undisclosed meetings with FIFA president Gianni Infantino.

The statement gave no timetable for Keller to either dismiss the complaints as unfounded or recommend further investigations. 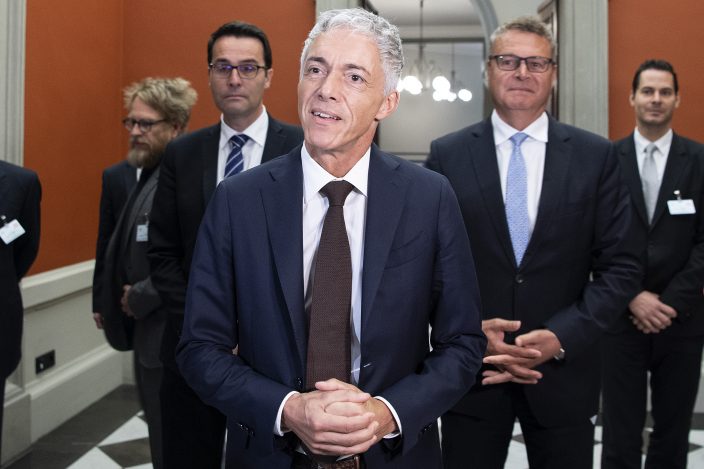 FILE - In this Wednesday, Sept. 25, 2019 file photo, Swiss Federal Attorney Michael Lauber speaks at a press conference in Bern, Switzerland. Swiss attorney general Michael Lauber was disciplined Wednesday, March 4, 2020 for misconduct during an investigation of FIFA, including failing to tell the truth about an undisclosed meeting with the soccer body's president Gianni Infantino. (Peter SchneiderKeystone via AP, file)

Lauber and Infantino met twice in 2016, soon after the FIFA president was elected, and again in June 2017 while the attorney general controlled a sprawling investigation into corruption linked to the governing body of soccer and officials worldwide.

Asked last week about the formal complaints and suggestion of collusion with Lauber, Infantino said “this whole thing is quite absurd.”

“To meet with the head prosecutor or attorney general of Switzerland is perfectly legitimate and it’s perfectly legal,” the FIFA president said on June 25 during a news conference held online.

The 2016 meetings were revealed in November 2018 by the Football Leaks series published by a German magazine which obtained confidential emails and documents in the soccer industry.

Lauber and Infantino both said the 2016 meetings were routine to ensure cooperation in the wider case. Neither acknowledged the third meeting that was reported by Swiss media several months later.

Lauber was disciplined in March by the oversight panel for his conduct during the FIFA investigation, obstructing the in-house probe, and failing to tell the truth about the June 2017 meeting with Infantino.

While under the internal disciplinary investigation, Lauber was both recused from FIFA investigations by a federal court and re-elected for a four-year mandate by Swiss lawmakers.

New surgery keeps Márquez out of MotoGP race this weeke ...

Russia warns it will see any incoming missile as nuclea ...

Russia will perceive any ballistic ...

What we know about the explosion in Beirut

Three days after a massive explosi ...