There were the tweets from strangers. “I hate you.” “You ruined the whole world.” “You deserve it.” And there was the scorn from inside his own locker room, the presumption that he infected a teammate with coronavirus, the suggestion that his recklessness somehow caused the entire sporting world to come to an absolute standstill.

Utah center Rudy Gobert is still standing tall, after all that and more.

Plenty of eyes will be on Gobert when the NBA season , the one that shut down March 11 when he became the first player in the league to be diagnosed with the coronavirus, takes a giant step toward returning by having teams gather at the Disney complex in Central Florida over the next few days. The Jazz will be a fascinating case study during this restart, particularly regarding whether or not Gobert and Donovan Mitchell — a fellow All-Star who was diagnosed with the virus shortly after the shutdown began and did not hide his anger with Gobert about it all — can coexist peacefully again. 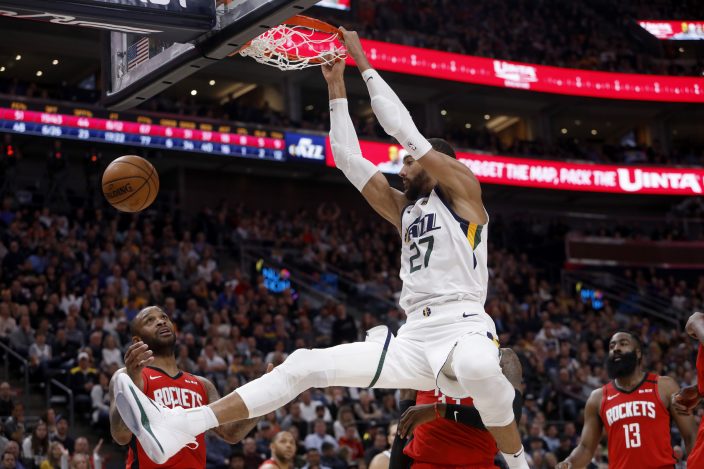 FILE - In this Feb. 22, 2020, file photo, Utah Jazz's Rudy Gobert (27) dunks during the second half of an NBA basketball game against the Houston Rockets in Salt Lake City. Gobert is standing tall, even after having coronavirus and dealing with an enormous amount of scorn after being diagnosed. He was the first NBA player to test positive for the virus and that prompted many to blame him for the league's shutdown in response to the pandemic. (AP PhotoKim Raff, File)

“I’m happy now. I’m in a good place, you know,” Gobert told reporters Friday. “And I’m happy that I get the joy back from playing basketball with my team and the competitiveness is back. I’m ready to try to go out there and try to win the championship. That’s the goal. And to be honest, after everything we’ve been through as a team and as human beings, it would be a great comeback.”

Gobert answered questions for about 11 minutes. He talked about the relationship with Mitchell. (“It’s never going to be perfect,” he said, acknowledging strains that have been no secret.) He talked about the potential of signing a lucrative extension — he’s supermax-eligible — with the Jazz, which could happen before next season. (“I don’t plan on leaving right now,” he said.) He talked about his recovery from the virus, which is ongoing, at least in how his sense of smell hasn’t totally recovered. (“Smelling, I took that for granted too. It’s back now, it’s back at 80%, I’m not worried,” he said.)

He spoke softly, calmly, thoughtfully. And even though he is the two-time reigning NBA defensive player of the year, he didn’t swat any question away.

“Obviously, when you have the whole world judging you and threatening you or sending you a lot of negative energy and stuff like that, it’s something that I would say is not easy as a human being,” Gobert said. “But at the same time, people just judge you on the perception they have and the perception they get. Sometimes it can be one picture, one video, one interview, one action.”

In this case, that’s pretty much exactly what happened.

A picture, a video, an interview, an action. It was the start of the downfall.

It was the morning of March 9: Before leaving a media session at shoot-around in Salt Lake City on Monday in advance of a game against Detroit, Gobert touched all the tape recorders that were placed before him on a table, devices that reporters who cover the Jazz were using. He meant it as a joke. When he tested positive two days later, it was no laughing matter.

The Jazz were in Oklahoma City, just moments away from starting a game against the Thunder, when word came that Gobert tested positive. The game was called off. The season was suspended that same night.

Just like that, Gobert was a center of negative attention.

“First of all, you make sure he’s OK,” said Orlando guard Evan Fournier, a fellow French national-team player, who reached out often to check on Gobert. “You know, you call him and once we’re on the phone or just talking, text, whatever, you just ask him a few questions. How is he feeling, blah, blah, blah. And then once he starts to open up and say things about how he sees the whole situation, then you just try to give your best judgment to him. And you know, that’s what I did.”

Gobert immediately started trying to show remorse. He donated $200,000 to a fund established to help those who work part-time at Jazz games, people who lost income because contests were canceled. More money — about $310,000 — went to families affected by the pandemic in Utah and Oklahoma City, plus in his native France. He taped a public-service announcement for the league.

For his part, Mitchell said the relationship with Gobert has improved.

The Jazz have secured a playoff berth. They’ll be without the injured Bojan Bogdanovic for the remainder of the season, yet still have enough depth to be considered a contender in the Western Conference.

And Gobert expects he and Mitchell, on the court anyway, will be fine.

“As long as we respect one another and we both share the same goals and we both do what’s best for the team, that’s what matters,” Gobert said. “And, you know, I think over the last few years that’s what we’ve been doing and that’s what we plan on continuing doing.”