“We have it totally under control,” President Donald Trump said in late January. A month later: “The Coronavirus is very much under control in the USA."

April and May brought the deadliest stretch of COVID-19 to date. And this past week, the number of new coronavirus cases per day hit an all-time high of 50,000.

Trump persisted in his empty assurances. The virus is “getting under control," he said Wednesday. His press secretary described the surge in many parts of the country as “embers.” The president acknowledged “flames” here and there. 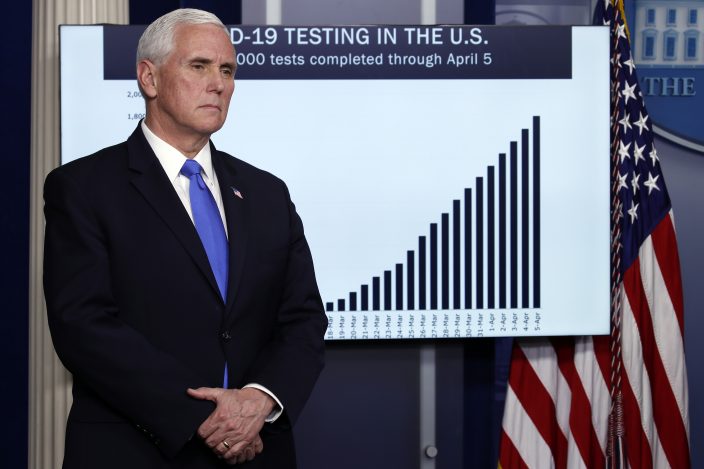 FILE - In this Monday, April 6, 2020, file photo, Vice President Mike Pence listens as President Donald Trump speaks about the coronavirus at the White House in Washington. Pence, in a June 16, 2020, op-ed in The Wall Street Journal, said the public health system is “far stronger” than it was when coronavirus hit. (AP PhotoAlex Brandon)

They cast word confetti over a pandemic that has killed more than 128,000 people in the U.S., while the president talked up a July Fourth fireworks celebration on the National Mall and told those who come Saturday to wear masks if it makes them feel good.

A sampling of recent statements and how it compares with reality: 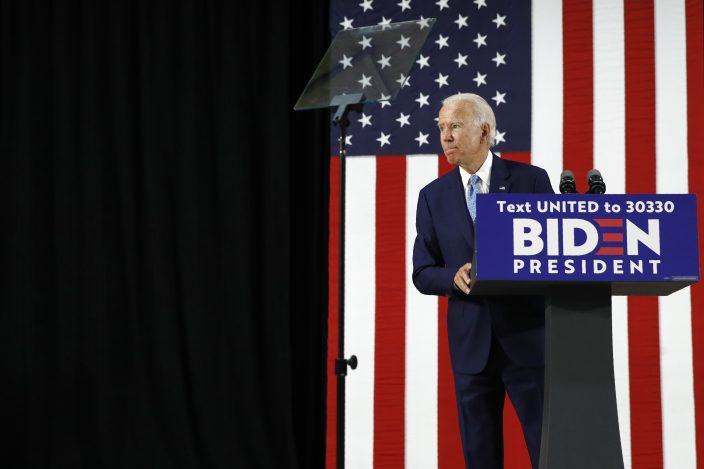 TRUMP, describing the COVID-19 threat as “getting under control”: “Some (places) were doing very well, and we thought they (the virus) may be gone and they flare up, and we’re putting out the fires.” — remarks Thursday on a jobs report.

TRUMP: “I think we are going to be very good with the coronavirus. I think that, at some point, that’s going to sort of just disappear, I hope.” — interview Wednesday on Fox Business Network.

THE FACTS: “The virus is not going to disappear," says Dr. Anthony Fauci, the government's top infectious disease expert. Nor can it be considered “under control” as cases have been surging to fresh daily highs.

FILE - In this June 16, 2020, file photo, signs remind patrons to wear masks and other protocols because of the coronavirus pandemic as they stroll through the Disney Springs shopping, dining and entertainment complex in Lake Buena Vista, Fla. On Friday, June 26, Vice President Mike Pence said Americans should look to their state and local leadership for modeling their behavior during the coronavirus pandemic. The comments only days after President Donald Trump held two campaign events that drew hundreds of participants but few wearing masks. (AP PhotoJohn Raoux, File)

The number of confirmed cases in the U.S. per day has roughly doubled over the past month, hitting 50,000 on Wednesday, according to a count kept by Johns Hopkins University. That is higher even than what the country experienced from mid-April through early May, when deaths sharply rose.

Fauci warned this past week that the increase across the South and West “puts the entire country at risk” and that new infections could reach 100,000 a day if people don’t start listening to guidance from public health authorities to wear a mask and practice social distancing.

During one of the biggest weekends of the summer for July Fourth, the Centers for Disease Control and Prevention advised Americans to wear face coverings at the beach, though not in the water. 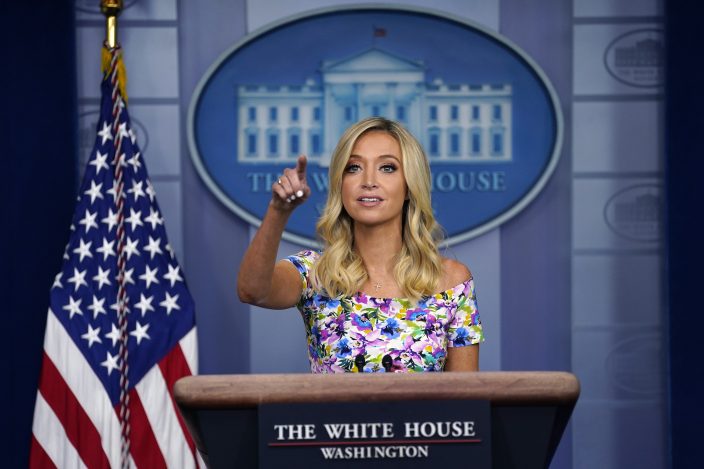 Arizona, California, Florida and Texas have recently been forced to shut down bars and businesses as virus cases surge. The U.S. currently has more than 2.7 million known cases and many more undetected.

Fauci has said there “certainly” will be coronavirus infections in the fall and winter.

VICE PRESIDENT MIKE PENCE: “While we’re monitoring about 16 states that are seeing outbreaks, it represents about 4 percent of all the counties in this country.” — interview with CBS aired Sunday.

THE FACTS: That’s a misleading portrayal of the virus threat. More than 20% of Americans actually live in those relatively few counties.

The White House provided The Associated Press with the full list of U.S. counties that reported increases in COVID-19 cases as of a week ago, when Pence and other administration officials repeatedly cited the low county tally. The list showed 137 of the 3,142 counties in the U.S. that were under a higher alert — indeed, about 4% in that snapshot of time.

But measured by population, those counties represent a vastly higher share — more than 1 in 5 people in the U.S.

Altogether there are 68.3 million people living in those 137 counties, while there is a total U.S. population of 322.9 million. That means 21.1% of U.S. residents actually live in the virus “hot spots" identified in the list.

TRUMP: “Biden was asked questions at his so-called Press Conference yesterday where he read the answers from a teleprompter. That means he was given the questions.” — tweet Wednesday.

THE FACTS: Biden did not read answers off a teleprompter. Nor did The Associated Press, which asked the first question at the briefing, submit questions in advance.

Biden used a teleprompter to read prepared remarks that took aim at Trump’s handling of the coronavirus, before the questions and answers started, at which point the teleprompter appeared to have been turned off.

Biden's campaign gave him a list of news organizations to call on and he answered questions from reporters on that list as well as some he chose spontaneously. That’s not an uncommon practice when officials give news conferences.

Video footage shows that during nearly 30 minutes of questions and answers, Biden often looked directly at the reporter, not at the teleprompter. His answers were at times long-winded, without the practiced pauses typically heard in prepared speeches.

TRUMP: “He wants to defund and abolish police.” — interview Wednesday on “America This Week.”

THE FACTS: Biden does not join the call of protesters who demanded “defund the police” after George Floyd’s killing.

“I don’t support defunding the police,“ Biden said last month in a CBS interview. But he said he would support conditioning federal aid to police based on whether “they meet certain basic standards of decency, honorableness and, in fact, are able to demonstrate they can protect the community, everybody in the community.”

Biden’s criminal justice agenda, released long before he became the Democrats’ presumptive presidential nominee, proposes more federal money for “training that is needed to avert tragic, unjustifiable deaths” and hiring more officers to ensure that departments are racially and ethnically reflective of the populations they serve.

That adds up to more money for police, not defunding law enforcement.

KAYLEIGH MCENANY, White House press secretary: “You have this President who, when Washington was unanimous in saying, ‘We’re going into Iraq,’ this President said, ‘No, that’s not the right decision.’” — news briefing Tuesday.

THE FACTS: That's false. Trump voiced support for going into Iraq, as much as he and now his press secretary insist otherwise. And Washington was not unanimous in supporting the invasion.

On Sept. 11, 2002, when radio host Howard Stern asked Trump whether he supported a potential Iraq invasion, Trump said: “Yeah, I guess so."

On March 21, 2003, just days after the invasion, Trump said it “looks like a tremendous success from a military standpoint.”

More than 150 members of Congress voted against the 2002 resolution to authorize President George W. Bush to use military force against Iraq. That is not unanimity.

TRUMP: “We are tracking down the two Anarchists who threw paint on the magnificent George Washington Statue in Manhattan. ... They will be prosecuted and face 10 years in Prison.” — tweet Tuesday.

TRUMP: “Since imposing a very powerful 10 year prison sentence on those that Vandalize Monuments, Statues etc., with many people being arrested all over our Country, the Vandalism has completely stopped.” — tweet Sunday.

THE FACTS: Trump does not have the authority to impose prison sentences — a president is not a judge. Nor can he toughen penalties on his own.

Trump signed an executive order last week to protect monuments, memorials and statues, calling on the attorney general to prosecute to the fullest extent of the law any person or group that destroys or vandalizes a monument, memorial or statue.

The order basically instructs the attorney general to enforce laws that already exist.

An artist in Los Angeles is memori ...

Daimler AG, the maker of Mercedes- ...