While the French capital’s official Pride parade was postponed until November to prevent the spread of the coronavirus, thousands of people turned out anyway for a festive, politically driven march that echoed the themes of recent international protests against racial injustice.

Marchers chanted “It’s my body, it’s my choice!” and “Everyone hates the police!” as the young, ethnically diverse crowd wound peacefully from the Pigalle neighborhood in northern Paris to Republique plaza in the east. Many of the participants wore protective face masks. 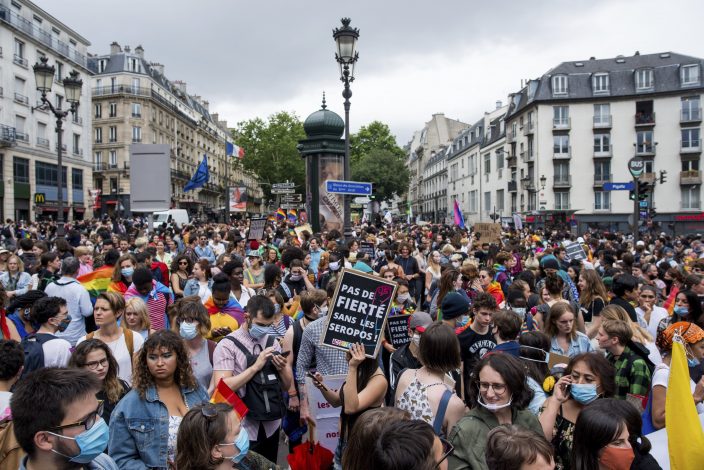 General view of the start of the annual Gay Pride march in Paris, France, Saturday, July 4, 2020. Sign at center reads in French "No pride without the Seropositives". (AP PhotoBenjamin Girette)

The virus has forced organizers in cities around the world to cancel, postpone or adapt their Pride parades this year, frustrating activists who want to collectively mark the 50th anniversary of the first Gay Pride parades and marches in Chicago, Los Angeles, New York and San Francisco in 1970.

At Saturday's event in the French capital, marchers wore rainbow flags as capes, waved the yellow and purple flag of the intersex pride movement and carried red umbrellas to represent sex workers. Some held banners calling attention to the challenges faced by LGBTQ migrants or members of minority communities in impoverished neighborhoods.

“I’m here because I saw myself in this call for a more political, more politicized, more radical Pride,” said Douce Dibondo, 26, who hosts a podcast that highlights voices of people of color and the LGBTQ community. “Previous Pride events didn’t resonate with me because I had the feeling I was joining the very sequined, very depoliticized side” of the movement. 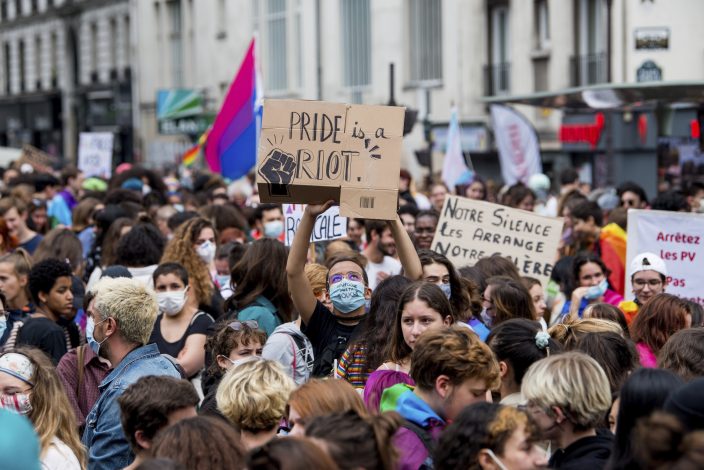 Some participants criticized the influential group Inter-LGBT, which organizes the traditional Paris Pride march featuring parade floats from political parties and corporations, for not pushing hard enough for political change and for allowing a police float at past parades. Inter-LGBT delayed its event this year until November because of the pandemic.

Referring to police officers who took part in previous Pride events, Dibondo said: “We don’t deny their identities as LGBTQ. But what they represent as forces, as the established order in our society, is what we are fighting.”

Victor Galarraga, co-president of AIDS awareness group ACT UP Paris, drew a parallel between the alienation and discrimination gay men experienced in the early years of the HIV epidemic to what marginalized minorities are going through during the COVID-19 pandemic. 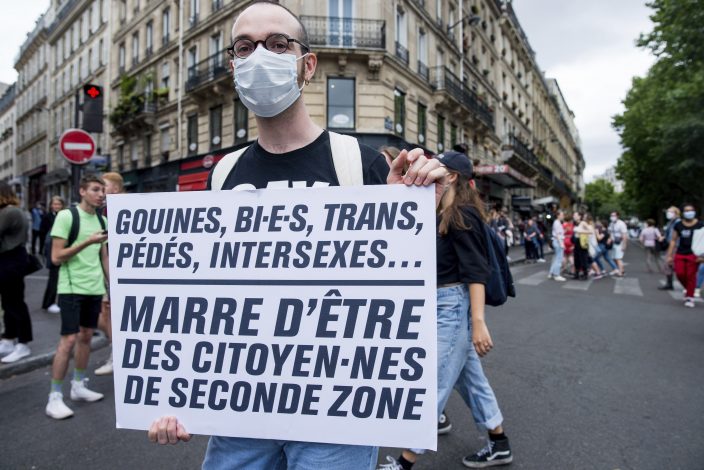 “We are here today for the same things that brought us here for the past 40 years," he said. "We are here to demand the most basic rights for the most forgotten people in this pandemic: the trans community, sex workers, HIV-positive, people in precarious situations, migrants.”

LGBTQ rights activists in Paris, New York and other cities have held similar alternative marches alongside annual Pride parades in recent years. This year, Pride season coincides with activism spurred by anger over racism injustice and police brutality in the wake of George Floyd’s death.

4-base error on ball over fence helps Rangers top Angel ...

In light of Major League Baseball' ...