Police are guarding every entrance of the housing estates and residents are not allowed to leave their homes for any reason. 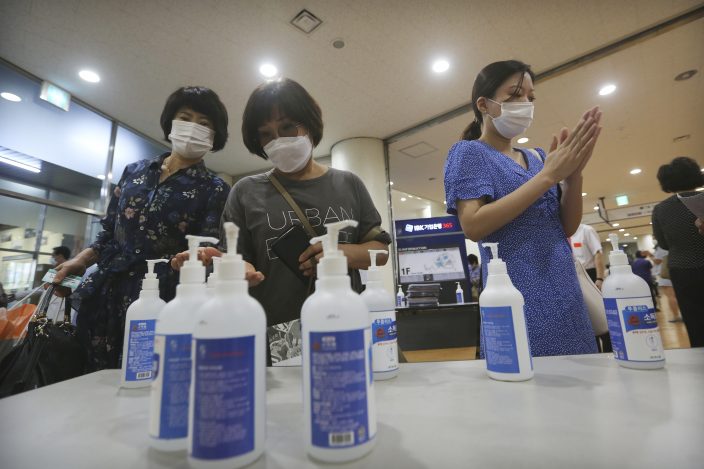 Christians wearing face masks to help protect against the spread of the new coronavirus use hand sanitizer before attending a service at the Yoido Full Gospel Church in Seoul, South Korea, Sunday, July 5, 2020. (AP PhotoAhn Young-joon)

Andrews said the residents will have their rent waived for the next two weeks and will receive one-off hardship payments of between 750 and 1,500 Australian dollars ($520 to $1,040). The government said it would arrange the delivery of food and medical supplies to all homes.

Australian Medical Association President Tony Bartone called for a temporary halt to the easing of COVID-19 restrictions across the country after the alarming surge in Victoria.

Pool chairs are spread out as a precaution against the coronavirus on the Fourth of July at the Strat hotel-casino Saturday, July 4, 2020, in Las Vegas. (AP PhotoJohn Locher)

— English pubs reopen but little normal elsewhere in the world

— Vice President Mike Pence i s the public face of the administration’s coronavirus response and it’s a job that’s becoming even more difficult. Pence has been trying to convince the public that the country is winning even as cases spike in large parts of the country. 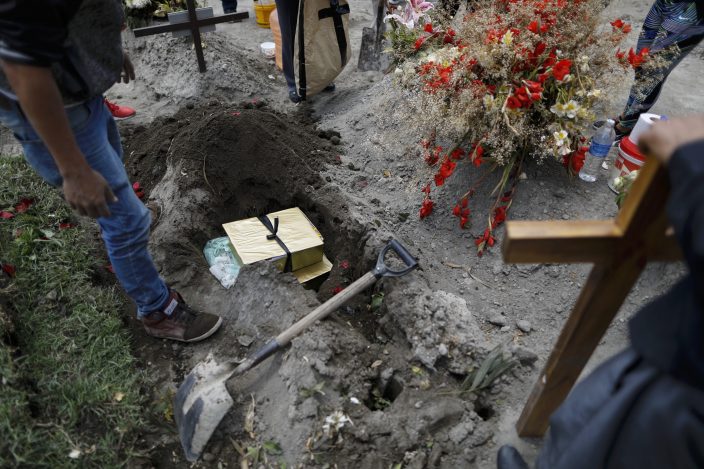 Boxes containing the flowers, lime and other symbolic elements used in the cross-raising ceremony are buried atop the grave of Luz Maria Gonzalez, as her family marks nine days since her burial, in the Municipal Cemetery of Valle de Chalco on the outskirts of Mexico City, Saturday, July 4, 2020. Maria Luz Gonzalez, 56, who had long suffered from asthma, diabetes and hypertension, died two days after her son, who was hospitalized for breathing problems and a cough before dying of complications said to be related to pneumonia and undiagnosed diabetes. (AP PhotoRebecca Blackwell)

— President Donald Trump has repeatedly credited his February ban on travelers from mainland China as his signature move against the advance of the coronavirus pandemic. Records obtained by The Associated Press show that nearly 8,000 Chinese nationals and foreign residents of Hong Kong and Macao entered the U.S. soon after the ban was imposed.

— Brazilian President Jair Bolsonaro has attended a U.S. Independence Day celebration in Brazil’s capital at which participants declined to wear face masks, one day after he vetoed obligatory use of masks in private settings.

A woman takes pictures with her phone as people visit the 911 Memorial Plaza during its reopening after having been closed for more than three months amid the coronavirus pandemic, Saturday, July 4, 2020, in New York. (AP PhotoEduardo Munoz Alvarez)

SEOUL, South Korea — South Korea has recorded 60-plus COVID-19 cases for a third consecutive day, a continuation of a virus spread beyond the greater Seoul area.

The Korea Centers for Disease Control and Prevention said Sunday it has confirmed 61 additional cases, bringing the national total to 13,091. It says the death toll remained at 283. 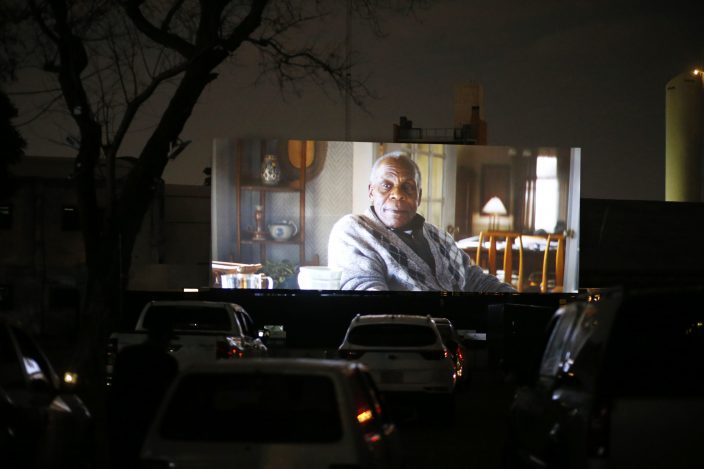 People in their cars watch the movie "Jumanji," with actor Danny Glover at Sacramento drive-in cinema, Saturday, July 4, 2020, in Asuncion, Paraguay. Several drive-in cinemas were started this weekend to aid in social distancing amid the coronavirus pandemic. (AP PhotoJorge Saenz)

The agency says 43 of the newly reported cases were locally infected patients. All but two of those cases were either from the Seoul metropolitan area or two central cities, Gwangju and Daejeon. The remaining 18 cases were linked to international arrivals.

South Korea has been grappling with an uptick in new infections since it eased social distancing rules in early May. South Korea recorded 63 new cases on both Saturday and Friday.

BOZEMAN, Mont. -- A Montana newspaper reports that the wife and the running mate of Republican governor candidate Greg Gianforte, as well as several other top GOP officials, were possibly exposed to the coronavirus while attending an event with the girlfriend of President Donald Trump’s oldest son. 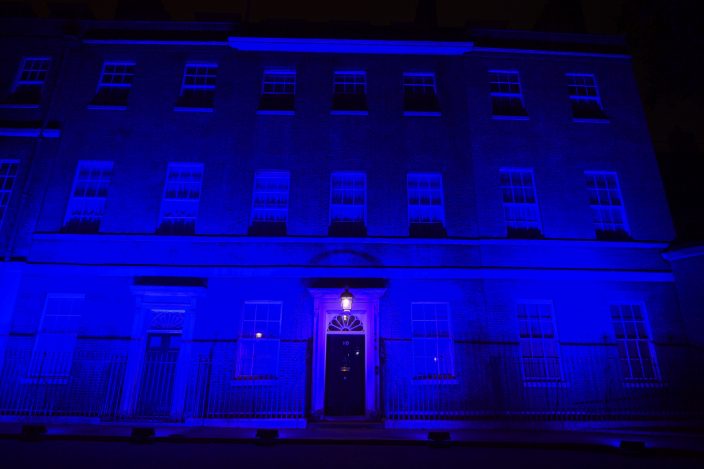 As part of the National Health Service (NHS) birthday celebrations 10 Downing Street, in London, is illuminated blue on Saturday evening, July 4, 2020. Saturday July 4, the day before the NHS birthday, has been designated as a chance for the nation to come together and pay respect. As part of this collective memorial, and as a mark of respect and tribute to NHS staff, essential workers and everyone who has played their part during the coronavirus pandemic, iconic landmarks were asked to be illuminated in blue. (Victoria JonesPA via AP)

The New York Times reports that Guilfoyle was diagnosed with the coronavirus on Friday.

Greg Gianforte is Montana’s representative in the U.S. House. He did not attend the event. 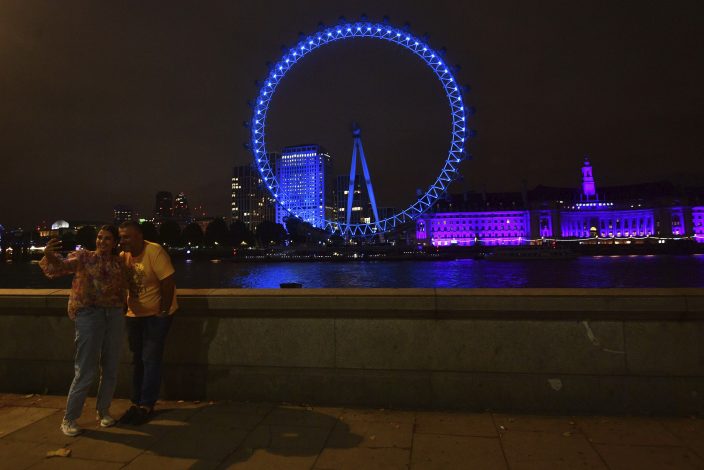 As part of the National Health Service (NH)S birthday celebrations The London Eye is illuminated blue on Saturday evening, July 4, 2020. Saturday, July 4, the day before the NHS birthday, has been designated as a opportunity for the nation to come together and pay respects. As part of this collective memorial, and as a mark of respect and tribute to NHS staff, essential workers and everyone who has played their part during the coronavirus pandemic, iconic landmarks were asked to be illuminated in blue. (Victoria JonesPA via AP)

BEIJING — Chinese officials have reported eight new confirmed COVID-19 cases as a recent outbreak in Beijing appears to have largely run its course.

China’s capital had two new cases, the seventh straight day of single-digit increase. Authorities have confirmed 334 infections during the city’s outbreak, which was detected about three weeks ago and is the largest in the country since March. No deaths have been reporte.

Beijing government spokesperson Xu Hejian said at a news conference Saturday that the situation “keeps improving and is completely controllable.” 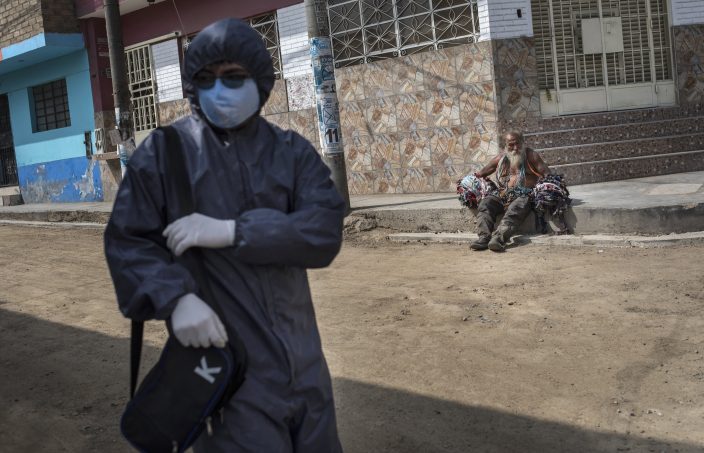 A commuter wearing a protective face mask as a measure to help curb the spread of the new coronavirus, waits for a bus while a homeless man sits on a curb on a street corner on the outskirts of Lima, Peru, Saturday, July 4, 2020. (AP PhotoRodrigo Abd)

The six cases outside Beijing were people arriving from abroad. Three were in Gansu province in the country’s northwest.

China has reported 83,553 confirmed cases and 4,634 deaths since the pandemic began. Its case count does not include people who test positive for the coronavirus but show no symptoms. 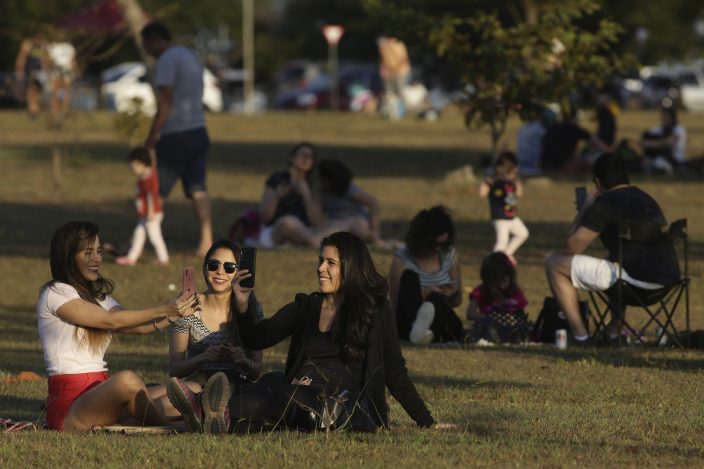 People gather in the late afternoon to watch the sunset at a park in the city center, after authorities eased restrictions related to COVID-19, in Brasilia, Brazil, Saturday, July 4, 2020. (AP PhotoEraldo Peres)

Much of Texas began mandating face coverings Friday on the orders of Gov. Greg Abbott. The mask order carries a $250 fine. The order is the most dramatic about-face that Abbott has made as he retreats from what stood out as one of America’s swiftest reopenings.

Texas health officials on Saturday said the state’s total number of confirmed coronavirus cases is now at 191,790. State health officials also reported 33 additional deaths linked to COVID-19, the disease caused by the virus. That brings Texas’ total to 2,608 deaths. Hospitalizations stood at 7,890 on Saturday, an increase of 238 from Friday.

BERLIN — The World Health Organization says it is ending a trial into whether anti-malaria drug hydroxychloroquine helps patients hospitalized with COVID-19. 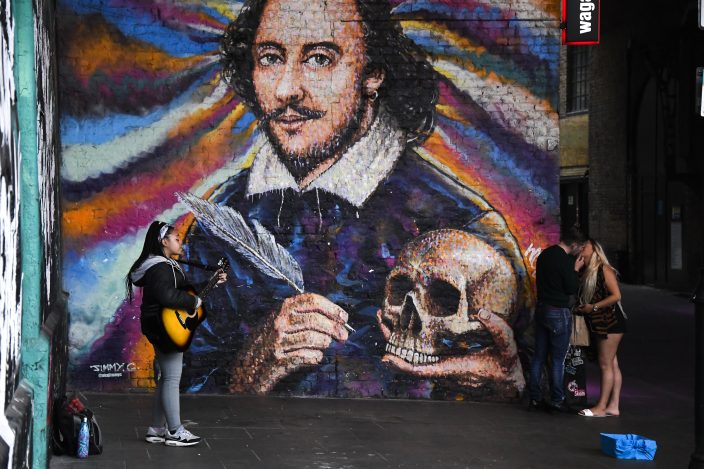 A girl plays guitar and a couple kiss under a mural depicting William Shakespeare on the south bank of river Thames, as the capital is set to reopen after the lockdown due to the coronavirus outbreak, in London, Saturday, July 4, 2020. England is embarking on perhaps its biggest lockdown easing yet as pubs and restaurants have the right to reopen for the first time in more than three months. In addition to the reopening of much of the hospitality sector, couples can tie the knot once again, while many of those who have had enough of their lockdown hair can finally get a trim. (AP PhotoAlberto Pezzali)

WHO said Saturday it has “accepted the recommendation” from the committee overseeing the trial to discontinue testing of hydroxychloroquine and lopinavir/ritonavir, a drug combination used to treat HIV/AIDS. The drugs were being compared with standard care for hospitalized patients.

WHO says a review of the interim results showed hydroxychloroquine and lopinavir/ritonavir “produce little or no reduction in the mortality of hospitalized COVID-19 patients when compared to standard of care.”

The agency adds that while there was no “solid evidence” of increased mortality for hospitalized patients given the drugs, there were “some associated safety signals in the clinical laboratory findings” of an associated trial.

WHO says the decision won’t affect possible trials on patients who aren’t hospitalized, or on those receiving the drugs before potential exposure to the coronavirus or shortly afterward.

BERLIN — The World Health Organization says member states reported more than 212,000 new confirmed cases of COVID-19 to the global body Saturday, the highest single-day increase since the start of the pandemic.

The Geneva-based WHO said the highest number of new infections was reported from the Americas region, which includes the United States and Brazil, with almost 130,000 confirmed cases.

WHO’s count can differ from other global case tallies due to official reporting delays.

ORLANDO, Fla. — A week before the first of Walt Disney World’s theme parks are set to reopen for the first time since March, three firefighters for the theme park resort’s private government have tested positive for COVID-19, union officials said Saturday.

The 205-member Reedy Creek Fire Department has under 140 firefighters.

Firefighters are upset since they are expected to use up sick or vacation days while in quarantine, instead of getting paid time off. They also said Disney’s private government has done a poor job of communicating their coronavirus-related policies and informing other firefighters about their sick colleagues.

“They can’t manage COVID in the fire department. How is Reedy Creek going to protect visitors?” Stromsnes said.

A spokeswoman for the Reedy Creek Improvement District didn’t respond to an email inquiry on Saturday.

Two theme parks, Magic Kingdom and Animal Kingdom, are set to reopen next Saturday for the first time since coronavirus-related closures in March. The resort’s two other theme parks, Epcot and Hollywood Studios, are opening four days later.

The leader of a cult-like self-imp ...

The Latest: Australia state can't trace source of many cases