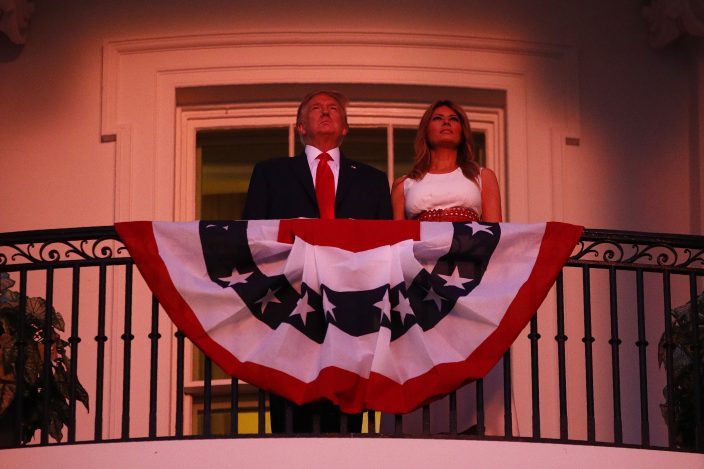 President Donald Trump and first lady Melania Trump stand on the Truman Balcony of the White House as they watch a fireworks display during a "Salute to America" event, Saturday, July 4, 2020, in Washington. (AP PhotoPatrick Semansky)

JULY 4 — On a day meant for unity and celebration, President Donald Trump vowed to “safeguard our values” from enemies within — leftists, looters, agitators, he said — in a Fourth of July speech packed with all the grievances and combativeness of his political rallies. By Lynn Berry and Aamer Madhani. SENT: 1,240 words, photos.

ISRAEL-NETANYAHU'S SON — As Israel’s scandal-plagued Prime Minister Benjamin Netanyahu stands trial for corruption, his 28-year-old son has emerged as a driving force in a vicious counterattack against critics and the state institutions prosecuting the longtime leader. A favorite of the prime minister’s nationalistic base and far right leaders around the world, Yair Netanyahu has become an almost daily fixture in the news, clashing with journalists on social media, threatening lawsuits against his father’s adversaries and posting online content deemed so offensive that Facebook briefly suspended his account. By Aron Heller. SENT: 970 words, photos. 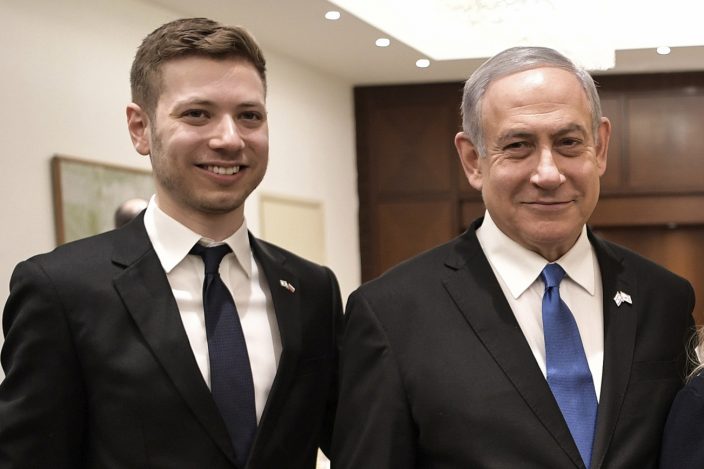 FILE - In this Jan. 23, 2020, file photo, Israeli Prime Minister Benjamin Netanyahu, second from left, and son Yair, left, pose for a photo in Tel Aviv, Israel, ahead of the World Holocaust Forum. As the scandal-plagued prime minister stands trial for corruption, his 28-year-old son has emerged as a driving force in a counterattack against critics and the state institutions prosecuting the longtime Israeli leader. A favorite of the prime minister’s nationalistic base and far right leaders around the world, Yair Netanyahu has become a fixture in the news. (Aleksey NikolskyiSputnik Kremlin Pool Photo via AP, File)

NATO-FRANCE-TURKEY — The festering dispute between France and Turkey over a naval standoff in the Mediterranean Sea has shone a glaring searchlight on NATO’s struggle to keep order among its ranks and exposed weaknesses in a military alliance that can only take action by consensus. SENT: 800 words, photos.

RACIAL INJUSTICE-SEATTLE — Authorities say a car drove onto a closed freeway and into a crowd of protesters, killing one person and critically injuring another. Twenty-four-year-old Summer Taylor of Seattle died in the evening at Harborview Medical Center. By Martha Bellisle. SENT: 800 words, photos.

JAPAN-HEAVY RAIN — Deep floodwaters and the risk of more mudslides that left about 20 people confirmed or presumed dead hampered search and rescue operations on Sunday in southern Japan, including at elderly home facilities where more than a dozen perished and scores are still stranded. SENT: 400 words, photos.

VIRUS OUTBREAK — Florida and Texas reported record daily increases in confirmed coronavirus cases Saturday, the latest sign that the virus is surging in many parts of the United States, casting a pall over Fourth of July celebrations. SENT: 970 words, photos. With VIRUS OUTBREAK-THE LATEST.

VIRUS OUTBREAL-GUILFOYLE-MONTANA — The wife and the running mate of Republican gubernatorial candidate Greg Gianforte, as well as several other top GOP officials, were possibly exposed to the coronavirus after attending an event with the girlfriend of President Donald Trump’s oldest son. SENT: 280 words, photo.

VIRUS OUTBREAK-KANSAS-HOLOCAUST CARTOON — A weekly Kansas newspaper whose publisher is a county Republican Party chairman posted a cartoon on its Facebook page likening the Democratic governor’s order requiring people to wear masks in public to the roundup and murder of millions of Jews during the Holocaust. SENT: 820 words, photos.

VIRUS OUTBREAK-ASIA — India has reported another record 24-hour jump in coronavirus cases as the World Health Organization cautioned against the country’s plans to release a vaccine by August. SENT: 560 words, photos, developing.

VIRUS OUTBREAK-MEXICO — Mexico has topped 30,000 COVID-19 deaths, overtaking France as the country with the fifth-highest number of deaths since the pandemic began. SENT: 260 words, photos.

RACIAL INJUSTICE-COLUMBUS STATUE — Baltimore protesters pulled down a statue of Christopher Columbus and threw it into the city’s Inner Harbor on Saturday night. SENT: 180 words, photos.

RACIAL INJUSTICE-JOHNS HOPKINS-NOOSE — Johns Hopkins University is investigating the discovery of a rope tied into a noose at a construction site in a building it owns off its Baltimore campus. SENT: 200 words, photo.

RACIAL INJUSTICE-PHOENIX-STREET NAMES — Phoenix officials are set to begin the process of changing the names of two streets — one seen as demeaning to indigenous Native American women and the other glorifying the Confederacy. SENT: 330 words, photos.

BRITAIN-OBIT-EARL CAMERON — Earl Cameron, who was one of the first Black actors to perform in mainstream British films and played supporting roles to enduring entertainment icons such as James Bond and the title character in “Doctor Who” before appearing in the U.N. thriller “The Interpreter” in his 80s, has died. He was 102. SENT: 600 words, photo.

SPORTSBOOK ERROR — The nearly quarter-million dollars in winning wagers reportedly placed at MGM Resorts last Sunday might be the largest sportsbook loss in Las Vegas history on bets made after an event has started. SENT: 430 words.

VIRUS OUTBREAK-9/11 PHOTO — A man photographed fleeing smoke and debris as the south tower of the World Trade Center crumbled just a block away on Sept. 11, 2001, has died from coronavirus. SENT: 380 words, photo.

UNITED STATES-AFGHANISTAN-FATALITY — The Defense Department says a 21-year-old soldier has died in a vehicle accident while serving in Afghanistan. Spc. Vincent Sebastian Ibarria, from San Antonio, Texas, died as the result of a vehicle rollover accident on Friday in Farah, Afghanistan. SENT: 80 words.

TRUMP-GARDEN OF HEROES — President Trump has visions of establishing by the final months of his second term, should he win one, a “National Garden of American Heroes” that will pay tribute to some of the prominent figures in U.S. history, a collection of the “greatest Americans to ever live.” SENT: 755 words, photos.

FACT CHECK-WEEK — An AP Fact Check finds that President Trump has a monthslong history of declaring the coronavirus under control, when it isn’t. His empty reassurances on this front go back to late January, when the pandemic had barely started in the U.S., and cast word confetti over a pandemic that has killed more than 128,000 people in the country. By Hope Yen and Calvin Woodward. SENT: 1,220 words, photos. Find AP Fact Checks at https://apnews.com/APFactCheck.

CROATIA-ELECTION — Amid a spike of new coronavirus cases, voters in Croatia cast ballots on Sunday in what is expected be a close parliamentary race that could push the latest European Union member state further to the right. SENT: 350 words, photos.

JAPAN-TOKYO GOVERNOR — Tokyo Gov. Yuriko Koike is poised to be reelected in Sunday’s polls, buoyed by public support for her coronavirus handling despite a recent rise in infections that has raised concerns of a resurgence of the disease. The first woman to head the Japanese capital, Koike is also viewed as a potential candidate to succeed Prime Minister Shinzo Abe when his term ends in September 2021. SENT: 520 words, photos.

AUSTRALIA-FINANCE MINISTER — Australian Finance Minister Mathias Cormann, one of Prime Minister Scott Morrison’s most senior Cabinet members, says he is retiring from politics at the end of the year. SENT: 200 words, photo.

GRAND CANYON BODY — Officials have recovered the body of a 59-year-old woman in the Grand Canyon. The Grand Canyon Regional Communications Center said Saturday the body of Maria A. Salgado Lopez, of Scottsdale, Arizona, was found Friday after she fell from the rim west of Mather Point. SENT: 80 words.

CHINA-MERCEDES-RECALL — Mercedes-Benz will recall more than 660,000 vehicles in China later this year for a possible oil leak. A notice published last week on the website of China’s State Administration for Market Regulation said a seal between a high-pressure fuel pump and a low-pressure fuel pipe could weaken over time, possibly causing oil to leak when the engine starts in cold weather. SENT: 170 words.

BBO--BASEBALL RDP — Freddie Freeman tests positive for COVID-19. Masahiro Tanaka gets hit in the head by a line drive. David Price announces he won’t play this season. On this Fourth of July, even the return of baseball didn’t offer much cause for celebration. By AP Sports Writer Steve Megargee. SENT: 970 words, photos.

SOC-EUROPE-MATCHDAY — The Spanish league title race resumes with contenders Real Madrid and Barcelona both in action on Sunday and facing difficult away matches. In England, Liverpool has a point to prove when the team returns to Anfield for the first time as the newly crowned Premier League champion for a match against Aston Villa. In Italy, Inter Milan and Atalanta will be looking to increase the pressure on second-place Lazio. SENT: 280 words, photo.

Riot declared as fire burns in Portland police union of ...

A fire inside a police union build ...

Masks in class? Many questions as Germans go back to sc ...

Masks during class, masks only in ...