The United States has dipped under 50,000 new daily infections for the first time in four days, according to a tally by Johns Hopkins University, but experts fear celebrations for the July 4th weekend will act like rocket fuel for the nation’s surging coronavirus outbreak.

Johns Hopkins on Sunday counted 45,300 new coronavirus infections reported Saturday in the U.S. after three days in which the daily count reached as high as 54,500 new cases. The lower figure does not mean the situation in the U.S. is improving, it could be due to reduced reporting on a national holiday.

The United States has the most infections and virus-related deaths in the world, with 2.8 million cases and nearly 130,000 dead, according to the university. Experts say the true toll of the pandemic is significantly higher, due to people who died before they were tested and missed mild cases. 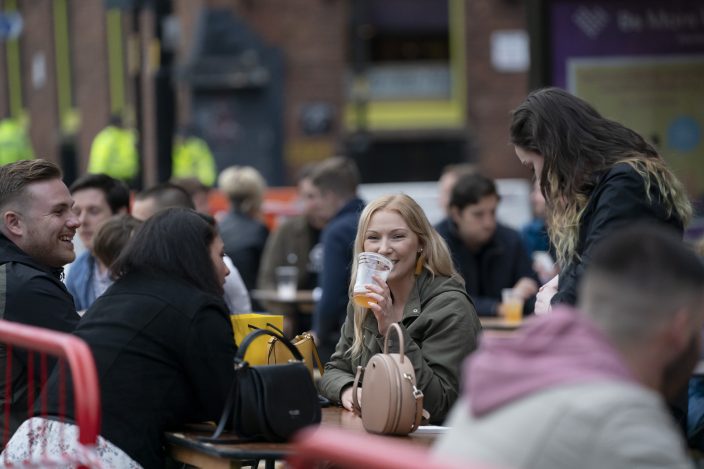 Members of the public are seen at a bar in Manchester's Northern Quarter, England, Saturday July 4, 2020. England is embarking on perhaps its biggest lockdown easing yet as pubs and restaurants have the right to reopen for the first time in more than three months. In addition to the reopening of much of the hospitality sector, couples can tie the knot once again, while many of those who have had enough of their lockdown hair can finally get a trim. (AP PhotoJon Super)

Worldwide, nearly 11.3 million people have been infected and over 531,000 have died, with outbreaks surging in India, South Africa, Pakistan, Brazil and several other Latin American countries. In a first, South Africa on Sunday reported more than 10,000 new confirmed cases in a single day.

To show just how steep the U.S. infection curve is, authorities were reporting under 20,000 new infections a day as recently as June 15. On Saturday, Florida and Texas reported more record daily increases in confirmed cases and virus-related deaths have begun to rise.

Despite warnings by health experts to limit gatherings, President Donald Trump went ahead with a speech at Mount Rushmore in South Dakota on Friday and an evening of tribute and fireworks Saturday on the National Mall in Washington. Trump used the nation's Independence Day as an occasion to assail those who do not support him and did not mention the horrific death toll from the pandemic.

Members of the public are seen at a bar in Manchester's Northern Quarter, England, Saturday July 4, 2020. England is embarking on perhaps its biggest lockdown easing yet as pubs and restaurants have the right to reopen for the first time in more than three months. In addition to the reopening of much of the hospitality sector, couples can tie the knot once again, while many of those who have had enough of their lockdown hair can finally get a trim. (AP PhotoJon Super)

Pat Lee of Upper Dublin, Pennsylvania, and two friends, none in masks, gathered near the event in Washington.

“POTUS said it would go away,” Lee said of the pandemic, using an acronym for president of the United States. “Masks, I think, are like a hoax.”

In another worrying sign, the World Health Organization said member states reported more than 212,000 confirmed cases of COVID-19 around the world on Saturday, the highest single-day increase since the start of the pandemic. The Geneva-based organization said more than 60% of the confirmed cases reports it received were in the Americas, which includes the United States and Brazil. 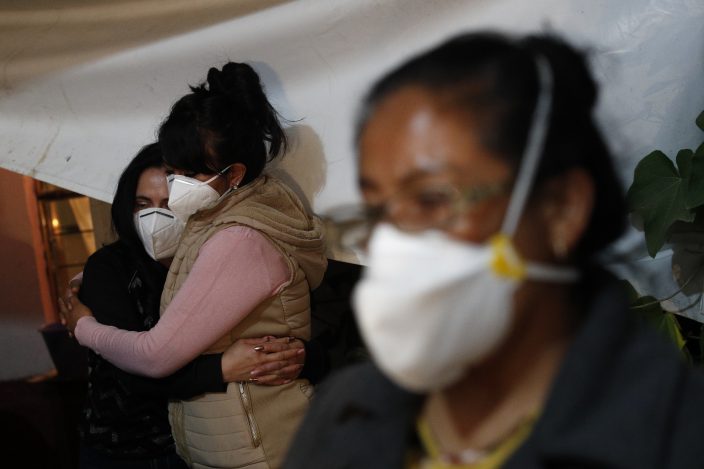 Sisters Lidia, left, and Ana Judith, embrace during the cross raising ceremony for their mother Luz Maria Gonzalez, in the family home in Valle de Chalco on the outskirts of Mexico City, Friday, July 3, 2020. Gonzalez, 56, who had long suffered from asthma, diabetes, and hypertension, died two days after her 29-year-old son, who was hospitalized for breathing problems and a cough before dying of complications said to be related to pneumonia and undiagnosed diabetes. (AP PhotoRebecca Blackwell)

Texas, which reported a record daily increase of 8,258 confirmed coronavirus cases Saturday, is retreating from what had been one of the country's swiftest reopenings. Much of the state began mandating face coverings Friday, with a $250 fine for scofflaws.

In Florida, which reported 11,445 confirmed infections on Saturday, bars statewide are shut down and some regional attractions, such as Zoo Miami and Jungle Island, have closed. Officials in South Florida — including in Miami-Dade County and the Florida Keys — also closed beaches through the weekend.

Other beaches remained open. At St. Pete Beach on the Gulf of Mexico, parking spaces were scarce and hundreds clustered under umbrellas and in cabanas on the sand. Keisha Pereira came to the beach from Osceola County — more than 100 miles (160 kilometers) inland — with her daughter and two other children.

“We’re going to stay with each other," she said. "I feel pretty safe outside.”

The holiday weekend coincided with a big step back this week for California’s efforts to reopen the state’s economy. Gov. Gavin Newsom ordered a three-week closure of bars and many indoor establishments in counties where some 30 million people live.

In several California regions, economic woes prompted campaigns to convince state residents to travel within its borders. But public health experts and mayors of popular beach towns Santa Cruz and Half Moon Bay pleaded with people to stay home for the holiday.

Crista Luedtke said demand has been “bonkers” since reopening the 14-room Boon Hotel and Spa that she owns in the Sonoma County town of Guerneville. Guests must stay at least two nights and are assigned lounges near the pool.

“Tourism is not dangerous,” Luedtke said. “I think people not following the rules is dangerous."

In Britain, pubs and barbers reopened Saturday for the first time in months. It did not overwhelm emergency services as many had feared, but one senior police officer said Sunday it was “crystal clear” that drunk people struggled, or ignored, social distancing rules.

Rafal Liszewski, a store manager in central London, voiced concerns about the swelling crowds on Saturday.

“Quickly everything got out of control and by 8-9 p.m. it was a proper street party with people dancing and drinking,” he said. “Barely anyone was wearing masks and nobody respected social distancing .... to be honest, with that many people on one street, it was physically impossible.”

In Australia and northeast Spain, authorities ordered lockdowns for specific counties or communities to stomp out local outbreaks.

In the Bolivian city of Cochabamba, the relatives of one apparent virus victim left his coffin in the street for hours to protest the difficulties in having him buried. Police Col. Iván Rojas said the demand "is collapsing the police personnel and funeral workers” in the city of 630,000 people.

Health officials are quitting or getting fired amid outbreak

July US jobs report is expected to point to hiring slowdown

Virus testing in the US is dropping, even as deaths mount

'Too many are selfish': US nears 5 million virus cases