Last month, when former Major League All-star Torii Hunter said he’d been called the N-word “a hundred times” at Boston’s storied Fenway Park, the Red Sox were quick to back him up with a promise to fight racism.

“Torii Hunter’s experience is real,” the team said in a June 10 Twitter post, adding that there were at least seven incidents as recently as last year where fans used racial slurs. The team promised to do a better job dealing with racism: “As we identify how we can do better, please know we are listening.”

But those words rang hollow for more than a dozen Black men who have spent the last several years trying to get the Red Sox to listen to their claims that they were sexually abused by a former Red Sox clubhouse manager who died in 2005. 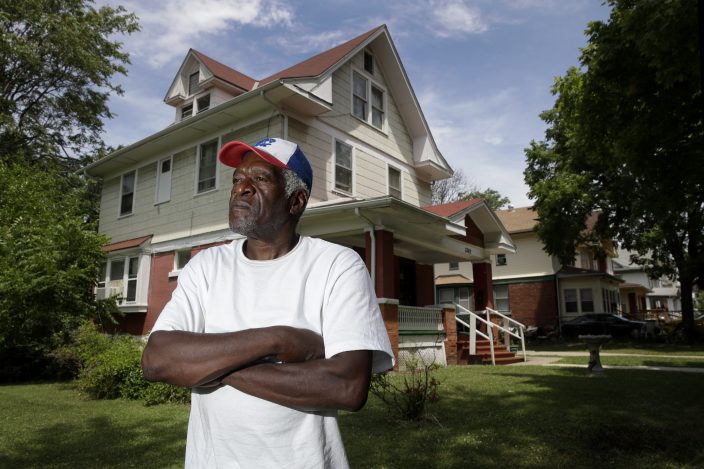 Gerald Armstrong recalls his time working for the old Kansas City Athletics as an attendant and ball boy in the visitor's clubhouse, as he speaks from the home where he grew up and now lives in Kansas City, Mo., on Friday, June 26, 2020. "I think a lot of Black men have been molested and for cultural reasons they just don't come forward to deal with it," he said. "And if you don't deal with it, you're looking at a lot of emotional problems." (AP PhotoCharlie Riedel)

The former clubhouse manager, Donald “Fitzy” Fitzpatrick, pleaded guilty to criminal charges of attempted sexual battery in 2002, admitting that he used Red Sox team memorabilia to lure young, Black clubhouse workers into secluded areas of the team’s Florida spring training facility, where he abused them. Fitzpatrick did not admit to abusing young boys in other ballparks.

Since then, a growing number of men have stepped forward to allege that they, too, were abused by Fitzpatrick at Fenway Park and at major league stadiums in Baltimore and Kansas City, when the Red Sox were playing on the road. Because their claims date to the 1970s, 1980s, and 1990s, they are too old to be included in civil lawsuits, and the men say their requests for out-of-court settlements have fallen on deaf ears.

Gerald Armstrong, 65, said he believes the team knew that Fitzpatrick, who worked for the Red Sox for decades, was molesting youngsters hired as bat boys, ball boys, and club house attendants. “You can’t tell me that you can have 30 or 40 guys traveling around with him and observing his behavior and not know what he was doing,” Armstrong said. 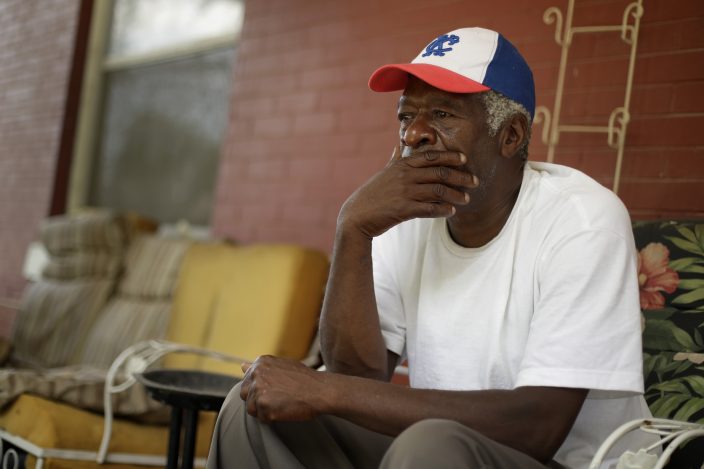 Gerald Armstrong recalls his time working for the old Kansas City Athletics as an attendant and ball boy in the visitor's clubhouse as he speaks from the front porch of the home where he grew up and now lives in Kansas City, Mo., on Friday, June 26, 2020. Armstrong is one of more than a dozen Black men who said they were sexually molested by former Red Sox clubhouse manager Donald "Fitzy" Fitzpatrick when they were youths. (AP PhotoCharlie Riedel)

“It was another slap in the face for me,” said Charles Crawford, 45, an African American from Taunton, Massachusetts after hearing the most recent Red Sox statement about combating racism at Fenway Park. Crawford alleges that Fitzpatrick abused him in a locked storage room and in the team showers at Fenway Park when he was 16 years old, in the summer of 1991.

“Now would be a good time for the Red Sox to show everyone they mean what they say,” said Armstrong, who claims he was the first Black youth to be hired in the visitors’ clubhouse by the old Kansas City Athletics — only to be allegedly abused by Fitzpatrick multiple times in a stadium storage room and the historic Muehlebach Hotel in downtown Kansas City. 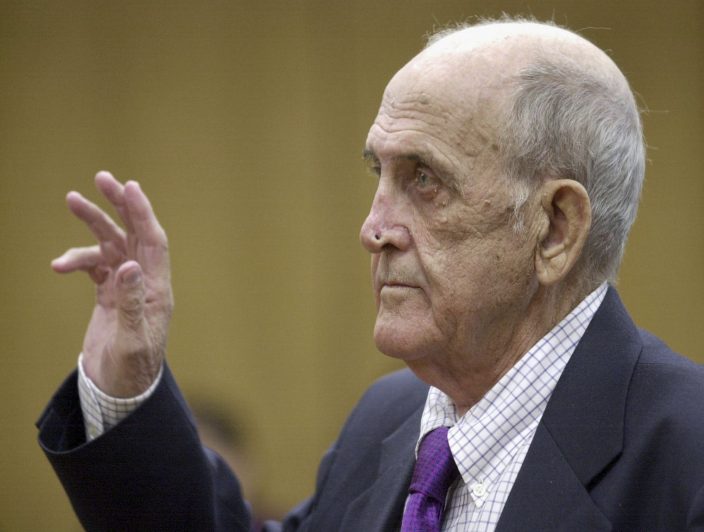 FILE - In this Thursday, May 16, 2002 file photo, retired Boston Red Sox spring training clubhouse manager Donald Fitzpatrick, 73, of Boston, holds up his hand as he takes an oath during his court hearing at the Polk County Courthouse in Bartow, Fla. Fitzpatrick, who served as clubhouse manager from 1970-1992, admitted to sexually abusing four boys during spring training. (AP PhotoGreg Fight, Pool)

When contacted by The Associated Press, Daniel Goldberg, an attorney for the Red Sox, re-issued a statement the team released in 2017, noting that Fitzpatrick pleaded guilty to criminal charges under the team’s previous ownership.

“The Red Sox have always viewed the actions — which date back as long as six decades ago — of Mr. Fitzpatrick as abhorrent,” the team statement says. “When the team, under prior ownership became aware of the allegations against Mr. Fitzpatrick in 1991, he was promptly relieved of his duties.”

Mitchell Garabedian, an attorney representing 21 men who claimed they were abused by Fitzpatrick — 15 of whom are Black — has been pushing for out-of-court settlements with the Red Sox, three other teams and Major League Baseball for years, but to no avail. Recently, following the death of George Floyd and statements about combating racism issued by the Red Sox, Major League Baseball and several teams, Garabedian has tried again to open negotiations, without success. 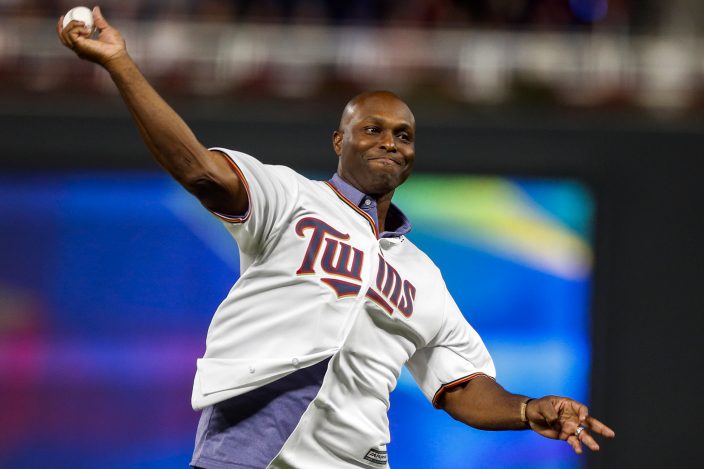 FILE - In this Monday, Oct. 7, 2019 file photo, former Minnesota Twins baseball player Torii Hunter throws out the ceremonial first pitch before Game 3 of the American League Division Series between the Twins and the New York Yankees, in Minneapolis. More than a dozen Black men, including Hunter, say the Red Sox have turned a deaf ear to claims they were sexually molested by former Red Sox clubhouse manager Donald “Fitzy” Fitzpatrick who pleaded guilty to attempted child sexual battery before his death in 2005. (AP PhotoBruce Kluckhohn)

“It’s inconceivable to me that they wouldn’t want to help these victims in this day and age,” said Garabedian, who is known for his work representing victims of Catholic clergy sex abuse, including those who took part in a 2002 settlement with the Boston Archdiocese.

Forbes Magazine recently pegged the value of the Red Sox at $3.3 billion, third among the 30 major league ball clubs. In a recent ranking of billionaires, the magazine also estimated principal owner John Henry’s net worth at $2.6 billion.

Today’s Red Sox, led by Henry, who also owns The Boston Globe, have labored to shed the team’s racist past since buying the franchise in 2002. 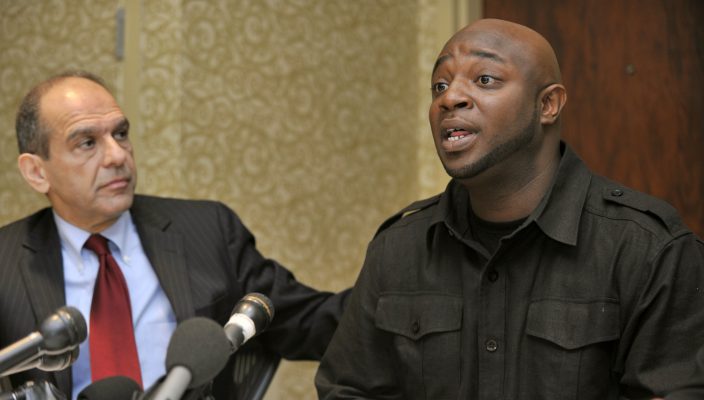 FILE - In this Monday, Dec. 5, 2011 file photo, Charles Crawford, right, speaks accompanied by attorney Mitchell Garabedian during a news conference in Boston. Crawford is one of the men accusing Donald Fitzpatrick, a former Boston Red Sox clubhouse manager, of sexually abusing them when they were youths. Fitzpatrick died in 2005. (AP PhotoJosh Reynolds)

Under the late Tom Yawkey, the team’s former owner, the Red Sox were the last major league team to integrate, signing infielder Elijah “Pumpsie” Green in 1959, more than a decade after Jackie Robinson smashed the color barrier by signing with the Brooklyn Dodgers.

In addition, the Red Sox had a chance to sign Robinson before he went to the Dodgers, and they took a pass on signing fellow Hall of Famer Willie Mays.

Two years ago, the Red Sox tried to step away from the team’s racist legacy when it asked the City of Boston to drop Yawkey’s name from a street that runs alongside Fenway Park. The request ignited opposition from a group of civic leaders who said the move would tarnish Yawkey’s record of charitable giving. But the Red Sox prevailed and today Yawkey Way has reverted to its original name, Jersey Street. 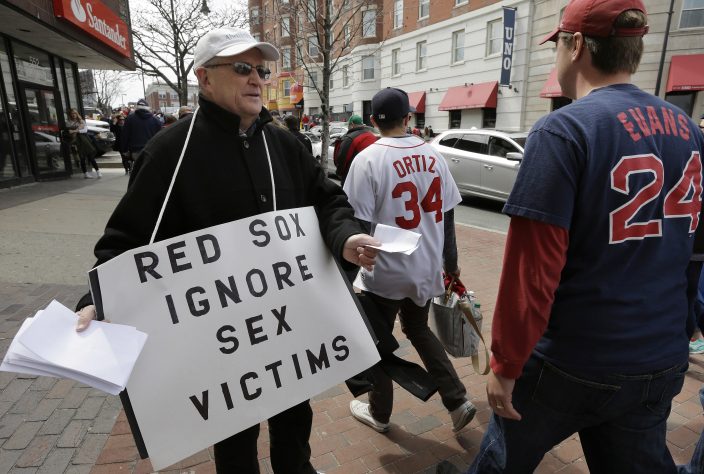 FILE - In this Monday, April 11, 2016 file photo, Robert Hoatson, of West Orange, N.J., left, hands out leaflets to baseball fans in Kenmore Square near Fenway Park, before the home opener between the Baltimore Orioles and the Boston Red Sox in Boston. Hoatson, of the organization Road to Recovery, Inc., is advocating for sexual abuse victims saying the Red Sox and Major League Baseball are refusing to help more than 20 abuse victims of former Red Sox clubhouse manager Donald Fitzpatrick, who died in 2005. (AP PhotoSteven Senne)

Crawford and Armstrong, who have long accused Fitzpatrick of abuse, said the former clubhouse manager used official team caps and baseballs to draw them and others into private settings in major league ball parks and at other locations.

Garabedian said three of the 21 alleged victims claim Fitzpatrick molested them after showing up at little league games in Boston and nearby Brockton and telling them he was a scout for major league baseball.

“He was very active,” Garabedian said.

Garabedian is seeking $5 million for each of the 21 alleged victims.

But Armstrong said he’s speaking out in large part to encourage all Black men who are victims of child sexual abuse to overcome the shame or embarrassment they may feel so they can acknowledge what was done to them and get the counseling they likely need.

“I think a lot of black men have been molested and for cultural reasons they just don’t come forward to deal with it,” he said. “And if you don’t deal with it, you’re looking at a lot of emotional problems.”

Public sector strikes to hit Germany next week over wag ...