When Jim Carrey and Dana Vachon handed in the book they had toiled on for eight years — a satirical “anti-memoir” about Carrey’s life but with increasingly extreme flights of absurdity — to Sonny Mehta, the late Knopf publisher said he would put it out as a novel. Carrey and Vachon protested.

“But Sonny, the project was to blow up the celebrity memoir,” they argued.

“Well, yes,” replied Mehta. “But how then would you explain the flying saucers?”

This book cover image released by Knopf show "Memoirs and Misinformation," a novel by Jim Carrey and Dana Vachon. The book is the latest reinvention of the 58-year-old star of “Ace Ventura: Pet Detective,” “The Mask,” “Eternal Sunshine of the Spotless Mind” and “The Truman Show.” After veering into painting and political cartoons, it’s Carrey’s debut novel. (Knopf via AP)

“Memoirs and Misinformation,” which was published Tuesday, is not an easy book to label. It opens with Carrey binge-watching Netflix while nursing a split from Renée Zellweger (who, here, leaves him for a bullfighter), pleading for his home security system to “Tell me I’m safe and loved” and craving the box-office success that brought him “closer to god.”

There’s much that’s straight from Carrey’s life, but it's an inflated version of his persona — “a hyperactive child making yuk-yuks,” as the book describes him. With overtones of “Network,” Carrey skewers celebrity, Hollywood, ego and himself. There’s Brazilian jiu-jitsu with Nic Cage, spiritual guru gatherings with Kelsey Grammar and a Tom Cruise referenced only as “Laser Jack Lightning.” Carrey, himself, is juggling movie options: a Mao Zedong film by Charlie Kaufman or “Hungry Hungry Hippos” in 3-D. Oh, and an apocalypse is approaching.

It may sound far-out, but for Carrey, truth lies in fiction. Even fiction in which Kelsey Grammar and U.F.O.s collide. 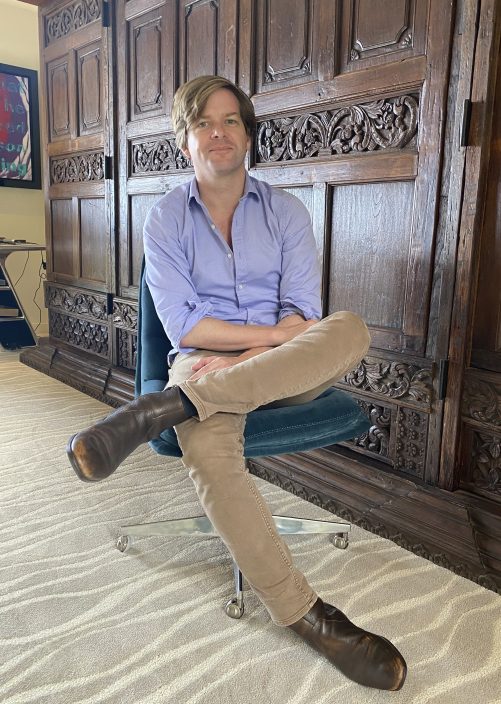 This image released by Knopf shows Dana Vachon, co-author of "Memoirs and Misinformation," with actor-comedian Jim Carrey. The book is the latest reinvention of the 58-year-old star of “Ace Ventura: Pet Detective,” “The Mask,” “Eternal Sunshine of the Spotless Mind” and “The Truman Show.” After veering into painting and political cartoons, it’s Carrey’s debut novel. (Jim CarreyKnopf via AP)

“There’s a lot of real feeling in this book,” said Carrey in a Zoom interview from his home in Hawaii. “It may be done in an out-there way but it sure is real to me.”

“Memoirs and Misinformation” is the latest reinvention of the 58-year-old star of “Ace Ventura: Pet Detective,” “The Mask,” “Eternal Sunshine of the Spotless Mind” and “The Truman Show.” After veering into painting and political cartoons, it’s yet another new medium for Carrey. (Vachon wrote 2007’s “Mergers & Acquisitions.”) The book, Carrey says, “is dearer to me than anything I’ve done.”

The “illusion of persona” is the chief subject of “Memoirs and Misinformation." In the last decade or more, Carrey has worked to deconstruct the best-known version of himself and make room for an emotional life that his public identity — “unflappably fun,” Carrey calls it — didn’t allow. He has spoken about bouts with depression and his ongoing spiritual journey. He has worked less frequently and sought satisfaction away from Hollywood.

“All personas after a while become sarcophagal. You want to claw your way out of them,” says Carrey. “You’re met all the time with ‘Why don’t you just be funny?’ I go, ‘Well, funny is one of the fingers on my hand.’ But I’m learning to use the whole hand.”

Make no mistake: “Memoirs and Misinformation” is funny. But it’s also a sober meditation on mortality, selfhood and the drive to entertain. A conventional memoir was never an option. “At the very least they’re reordered for effect,” says Carrey.

“From an early age, what I’ve always noticed about Jim is that he can change form," says Vachon, who, after flying out to finish the book, has been stranded in Hawaii by the pandemic. “His memoir needed to be one that did that because that’s his truth.”

For Carrey, a cartoonishly malleable, head-to-toe comedian of absurdist abandon, the urge to perform began in his working-class upbringing outside Toronto with a mother who fought depression and prescription pills and a father he calls “a magical being.”

“I watched him be animated and loving in sharing this gift that he had. I went: That’s a great thing to be,” says Carrey, the youngest of four. “I could make my mother feel better. A lot of comics come from moms in need. My mother was a child of alcoholics and she didn’t get the love that she needed, so her kids were there to give her that love that she was missing. Especially me. I thought I could heal her. I thought I could save her life.”

That desire to be bigger than yourself and to bring joy to others is something Carrey both values sincerely and considers dangerous. “If it becomes an addiction to exceptionalism,” he says, “that’s a bad place to be.”

The book reminds Carrey’s longtime friend and “The Cable Guy” producer Judd Apatow of when he first met Carrey. He was then a successful impressionist who, “on a dime,” stopped doing impressions and began improvising his entire act, Apatow recalls. “It was like he just cracked open his brain to see what was inside."

“We all start out young and ambitious and we have our dreams and we think our dreams will make us happy,” says Apatow. “And I think Jim was aware very early on that that’s not how it would go down.”

Carrey isn't sure when he began to feel “Jim Carrey” cleaving away from himself. Fame was fun, he says, until it wasn't.

“I tripped along for a long time,” Carrey says. “No one understands the value of anonymity until they lose it. You could say, ‘Well, that’s what you asked for.’ Yes, but it’s what a child asks for before they become an adult and understands what something means. I’m not saying it’s a bad thing, but it’s an odd thing and it keeps you in the house.”

There were low points. After the apparent suicide of Carrey's former girlfriend Cathriona White, he was sued for wrongful death by White's husband and her mother. Carrey denied involvement and counter-sued. By 2018, the suits were dismissed. “Memoirs and Misinformation” features plenty of farce, but there are also scenes of Hollywood tragedy that echo some of Carrey's heartaches.

“It really became an exercise of being able to say the things that are important to say in the most creative and abstract way possible and to deal with real painful and jarring movements in my life,” says Carrey.

Lately, Carrey has seemed to find an equilibrium. He’s starring in “Kidding,” a Showtime series with darker and more melancholic tones, and he was widely praised for his performance in “Hungry Hungry Hippo” -- correction, “Sonic the Hedgehog.” He has been busy sending out letters and book copies to everyone who makes cameos in the book.

“You can’t make a book about persona without personas,” says Carrey, quickly noting “it’s done with love.” “One day I had to call Nic (Cage) and say, ‘I wrote you into my fictitious memoir.’ I hardly got the sentence out and he said, ‘I’m so honored.’ He was amazed I had given him all the best lines.”

Is Carrey at peace? “I get there," he says. As eager as he seems to be to take “Jim Carrey” and tear him to pieces, he seems — at least through a computer window thousands of miles away — at ease in his own skin.

“Whatever it was, it was the perfect cocktail to get us here to this moment," Carrey says of his life. "So I don’t regret it at all.”

A literary guy: Jim Carrey novel scheduled for next May