After months of touting an unproven anti-malaria drug as a treatment for the new coronavirus, Brazilian President Jair Bolsonaro is turning himself into a test case live before millions of people as he swallows hydroxychloroquine pills on social media and encourages others to do the same.

Bolsonaro said this week that he tested positive for the virus but already felt better thanks to hydroxychloroquine. Hours later he shared a video of himself gulping down what he said was his third dose.

“I trust hydroxychloroquine,” he said, smiling. “And you?” 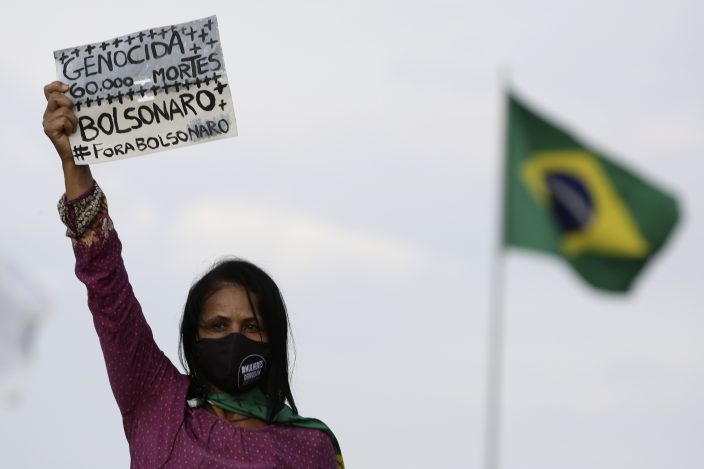 On Wednesday, he was again extolling the drug's benefits on Facebook, and claimed that his political opponents were rooting against it.

A string of studies in Britain and the United States, as well as by the World Health Organization, have found chloroquine and hydroxychloroquine ineffective against COVID-19 and sometimes deadly because of their adverse side effects on the heart. Several studies were canceled early because of adverse effects.

U.S. President Donald Trump has promoted hydroxychloroquine as a treatment for COVID-19 but chloroquine — a more toxic version of the drug, produced in Brazil — has been even more enthusiastically promoted by Bolsonaro, who contends the virus is largely unavoidable and, what is more, not a serious medical problem.

“He has become the poster boy for curing COVID with hydroxychloroquine,” said Paulo Calmon, a political science professor at the University of Brasilia. “Chloroquine composes part of the denialist's political strategy, with the objective of convincing voters that the pandemic's effects can be easily controlled.”

Trump first mentioned hydroxychloroquine on March 19 during a pandemic briefing. Two days later, and a month after Brazil's first confirmed case, Bolsonaro took one of his only big actions to fight the coronavirus. He announced he was directing the Brazilian army to ramp up output of chloroquine.

The army churned out more than 2 million pills — 18 times the country's normal annual production — even as Brazil's intensive care medicine association recommended it not be prescribed and doctors mostly complied.

The White House on May 31 said it had donated 2 million hydroxychloroquine pills to Brazil. Two weeks later the U.S. Food & Drug Administration revoked authorization for its emergency use, citing adverse side effects and saying it is unlikely to be effective.

Brazil’s audit court on June 18 requested an investigation into alleged overbilling from local production of chloroquine, which it called unreasonable given the drug’s ineffectiveness and cited the FDA decision. Meantime, stocks of sedatives and other medications used in intensive care ran out in three states, according to a late-June report from Brazil's council of state health secretariats.

A former defense minister, Aldo Rebelo, told The Associated Press that he is concerned the army will be wrongly blamed for its involvement in production of a drug that most experts call ineffective against the coronavirus.

“All they did was to follow a legal order and produce the pills,” said Rebelo. “The problem is the health ministry and the decision that the president made.”

Brazil’s interim health minister, an army general with no health experience before April, endorsed chloroquine as a COVID-19 treatment days after assuming the post in May. His predecessor, a doctor and health consultant, quit rather than do so.

As Brazil's death toll continued to climb — nearing 68,000 on Wednesday, the second-most in the world — the health ministry distributed millions of chloroquine pills across Brazil's vast territory. They have reached small cities with little or no health infrastructure to handle the pandemic and even a far-flung Indigenous territory.

All say they worry Bolsonaro's cheerleading will spur a new wave of desperate patients and relatives clamoring for chloroquine.

“I tell them that I don't prescribe it because there's no study proving it improves patients, that there are important risks with the indiscriminate use of this drug,” said Dr. Natalia Magacho, an attending physician at the Hospital das Clinicas. “Some even get angry at first. But all prescriptions are the doctor's responsibility and, as the risk outweighs the benefit, I don't prescribe it.”

Most doctors oppose any protocols for the use of chloroquine or hydroxychloroquine, but some physicians continue to believe and have pressured local authorities to permit its use, said João Gabbardo, the former No. 2 official at Brazil's health ministry.

“This issue has been framed in a very polarizing, politicized manner," said Gabbardo, who is now executive coordinator of Sao Paulo’s COVID-19 contingency center. "We are moving away from the discussion of science, of scientific evidence, toward a discussion of political positions.”

Bolsonaro's supporters and aides have amplified his message. Eduardo Bolsonaro, the president's son and a federal lawmaker, said his father will beat the disease because he is taking the anti-malarial drug.

"Treatment with chloroquine is rather effective at the start of the illness (and should be available for any Brazilian who needs it),” the younger Bolsonaro wrote on Twitter, without distinguishing between the two types of the drug.

Margareth Dalcolmo, a clinical researcher and prominent respiratory medicine professor at the state-funded Oswaldo Cruz Foundation, said she has no objection to Bolsonaro and his doctor agreeing on hydroxychloroquine treatment. The problem, she said, is broadcasting that information to an impressionable public that, if he recovers, will believe a potentially dangerous drug was responsible.

Dalcolmo treats patients and contracted COVID-19 herself. Before she bounced back, some friends asked if she would authorize administration of either chloroquine or hydroxychloroquine were she unable to grant consent.

“Over my dead body, dear,” she said. “I said if I’m in a coma, intubated, none of you are authorized to put me on chloroquine. I would never authorize its use on me. And I haven’t used it on my dozens of patients.”