The U.N. Security Council on Wednesday overwhelmingly rejected a Russian resolution that would have cut back the delivery of humanitarian aid to Syria’s mainly rebel-held northwest to just one crossing point from Turkey.

The Russian resolution needed a minimum of nine “yes” votes in the 15-member council for approval, but Moscow got support from only three other countries — China, Vietnam and South Africa. 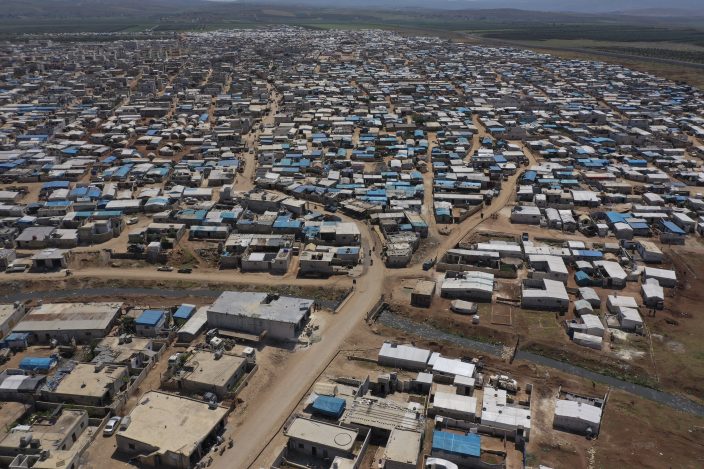 FILE - This April 19, 2020 file photo shows a large refugee camp on the Syrian side of the border with Turkey, near the town of Atma, in Idlib province, Syria. The head of the U.N. food agency warned of starvation and another wave of mass migration from Syria to Europe unless donors countries step up financial assistance to the war-ravaged country. (AP PhotoGhaith Alsayed, File)

Its failure to get the nine votes meant the U.S., U.K. and France didn’t need to consider using their veto. Those three permanent council members voted against the resolution along with Germany, Belgium, Estonia and the Dominican Republic. Four countries abstained — Tunisia, Niger, Indonesia and St. Vincent and the Grenadines.

Russia, Syria’s closest ally, circulated the draft resolution after it joined China on Tuesday in vetoing a draft resolution co-sponsored by Germany and Belgium to maintain aid deliveries through two border crossing points from Turkey for a year. It received 13 “yes” votes.

The current Security Council mandate for U.N. cross-border aid deliveries expires Friday, and Germany and Belgium are expected to circulate a new proposal, likely to authorize the two current crossings from Turkey for six months. 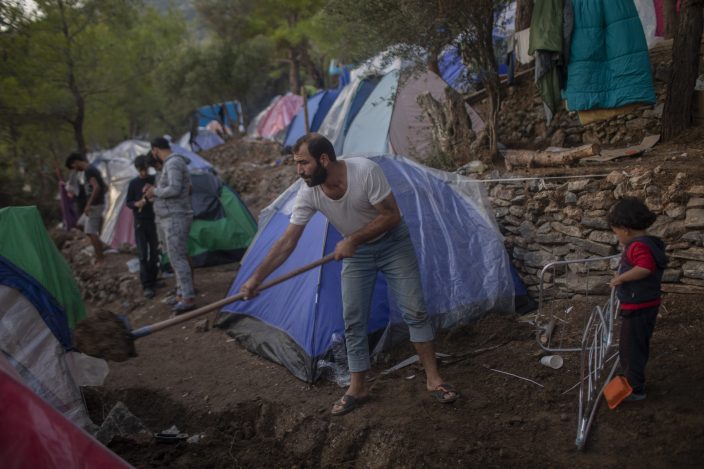 FILE - In this Sept. 25, 2019 file photo, a Syrian man shovels dirt next to his tent near the refugee and migrant camp at the Greek island of Samos island. The head of the U.N. food agency warned of starvation and another wave of mass migration from Syria to Europe unless donors countries step up financial assistance to the war-ravaged country. (AP Photo Petros Giannakouris, File)

In a joint statement after the vote, Germany and Belgium said that “millions of people are counting on the Security Council to allow for as much humanitarian access as possible ... (and) we will keep on working to this end.”

Whether the differences between the five veto-wielding council members can be resolved in the next 48 hours remained to be seen.

Russia has argued that aid should be delivered from within Syria across conflict lines. But the U.N. and humanitarian groups say aid for 2.8 million needy people in the northwest can’t get in that way.

Moutaz Adham, the Syria director for the humanitarian group Oxfam, called the council’s failure to reach agreement “a devastating blow to the millions of Syrian families who rely on this aid for clean water, food, health care and shelter.”

“Cross-border aid is needed now more than ever, as Syrians face the threat of COVID-19,” he said. “All available avenues for delivering aid will be critical in helping the more than 11 million people in need of assistance across Syria.”

In January, Russia scored a victory for Syria, using its veto threat to force the Security Council to adopt a resolution reducing the number of crossing points for aid deliveries from four to just two, from Turkey to the northwest. It also cut in half the yearlong mandate that had been in place since cross-border deliveries began in 2014 to six months, as Russia insisted.

The defeated German-Belgian resolution had dropped a call for the re-opening of an Iraqi crossing to the northeast to deliver medical supplies for the COVID-19 pandemic. In May, Russia’s U.N. Ambassador Vassily Nebenzia said: “Do not waste your time on efforts to reopen the closed cross-border points.”

The German-Belgian resolution would have extended the mandate for the two border crossings from Turkey to the northwest — Bab al-Salam and Bab al-Hawa — for a year.

The Russian-drafted resolution would only authorize cross-border deliveries through the Bab al-Hawa crossing for six months.

Germany’s U.N. ambassador, Christoph Heusgen, said that while the Bab Al-Hawa crossing is used to deliver aid to Idlib province, the Bab al-Salam crossing reaches the region north of Aleppo, where an additional 300,000 Syrians displaced by the last offensive are now sheltering.

“Both areas are separated by conflict lines,” he said.

The Russian draft also injected the issue of U.S. and European Union sanctions into the debate.

China’s U.N. Ambassador Zhang Jun on Tuesday blamed unilateral sanctions against Syria for exacerbating the country’s humanitarian situation and urged that they be lifted.

The Russian draft expressed “grave concern” at “the negative impact of unilateral coercive measures,” saying such measures “worsen the socio-economic and humanitarian situations, undermine the livelihoods of civilians, and further compromise the capacity of Syria to ensure access to food, essential health supplies and medical support to respond to the COVID-19 pandemic.”

It asked Secretary-General Antonio Guterres to provide a report on “direct and indirect impact of unilateral coercive measures” on humanitarian deliveries and Syria’s socio-economic situation by Aug. 31.

The United States and the EU have stated repeatedly that their sanctions have exemptions for humanitarian aid.

Germany’s Heusgen said in a statement after the vote that EU sanctions “are exclusively targeted at representatives of the authorities in Damascus” and were introduced “because of the repressive policies of the Assad regime against the civilian population of Syria” and its violations of international human rights and humanitarian law.

The Buffalo Bills have signed coac ...