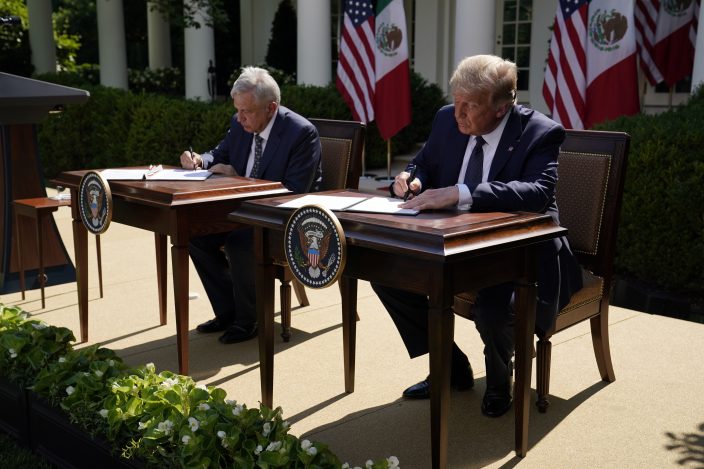 VIRUS-OUTBREAK — President Donald Trump insists that schools reopen this fall. Many parents, educators, doctors and economists want the same thing. But getting children back to school safely could mean keeping high-risk spots like bars and gyms closed. A growing chorus of public health experts is urging federal, state and local officials to reconsider how they are reopening the broader economy, and to prioritize K-12 schools. By Michelle R. Smith and Carla K. Johnson. SENT: 980 words, photos. With VIRUS OUTBREAK-THE LATEST.

SUPREME COURT-TRUMP TAXES — The Supreme Court is expected to rule on whether Congress and the Manhattan district attorney can see Trump’s taxes and other financial records he has fought hard to keep private. The high-stakes dispute tests the balance of power between the White House and Congress, as well as Trump’s claim that he can’t be investigated while in office. By Mark Sherman. SENT: 530 words, photos. UPCOMING: 770 words after morning ruling, timing uncertain. 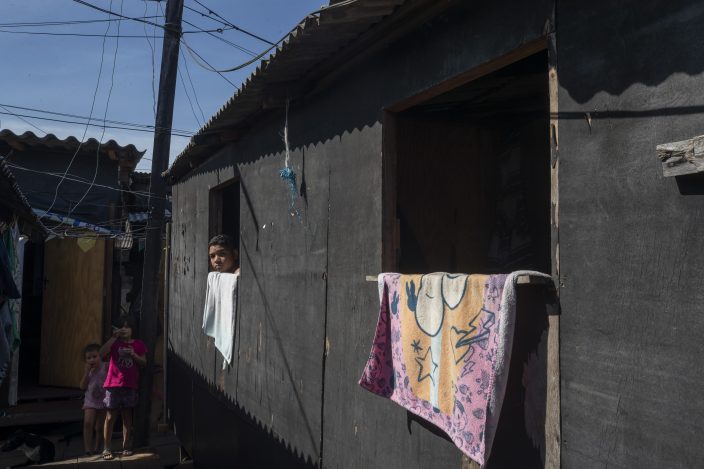 A youth peers from his home in Dique da Vila Gilda, one of the nation's largest communities of stilted shacks, in Santos, Brazil, Wednesday, July 8, 2020, amid the COVID-19 pandemic. Brazil is one of the outbreak’s most lethal hot spots. (AP PhotoAndre Penner)

VIRUS OUTBREAK-EMIRATES-SURVEILLANCE — Efforts by the United Arab Emirates to fight the coronavirus renews questions about mass surveillance in this U.S.-allied federation of seven sheikhdoms. Experts believe the UAE has one of the highest per-capita concentrations of surveillance cameras in the world. By Jon Gambrell. SENT: 1,050 words, photos.

VIRUS-OUTBREAK-BOLSONARO — After months of touting an unproven anti-malaria drug as a treatment for the new coronavirus, Brazilian President Jair Bolsonaro is turning himself into a test case live before millions of people as he swallows hydroxychloroquine pills on social media and encourages others to do the same. By David Biller, Marcelo De Sousa and Mauricio Savarese. SENT: 1,070 words, photos.

CONGRESS-PENTAGON LEADERS — The Pentagon’s top leaders are going before Congress for the first time in months. They are likely to be questioned on several major controversies, including their differences with Trump over the handling of protests near the White House last month during unrest triggered by the killing George Floyd in police hands. By Robert Burns and Lolita C. Baldor. SENT: 680 words, photo. UPCOMING: 990 words after 1 p.m. hearing. 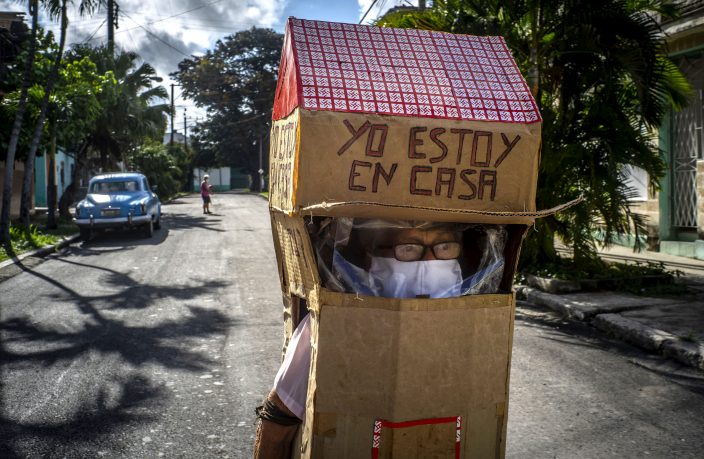 Feridia Rojas, a retired nurse, wears a cardboard box as a protective measure against the spread of the new coronavirus, in Havana, Cuba, Wednesday, July 8, 2020. The 82-year-old pensioner shuffles through the streets of Havana on shopping excursions wearing the cardboard box with a handwritten message that reads in Spanish, "I'm home." (AP PhotoRamon Espinosa)

BURKINA FASO-VOLUNTEER FIGHTERS — In an effort to combat rising jihadist violence, Burkina Faso’s military has recruited volunteers to help it fight militants. But with little training, few weapons, and dwindling means amid an economic downturn fueled by the coronavirus pandemic, the volunteers now say they are unable to adequately battle the well-armed extremists. By Sam Mednick. SENT: 860 words, photos. 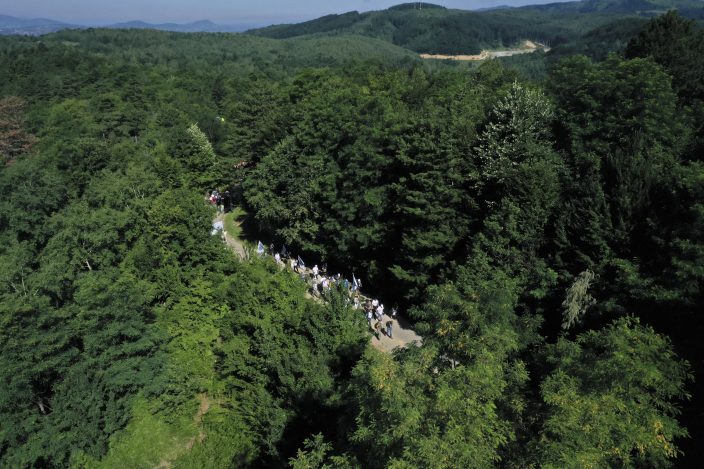 Bosnians, some of them survivors of the 1995 Srebrenica massacre, walk through a mountain area near Crni Vrh, Bosnia, Wednesday, July 8, 2020, during a Peace March recreating the path taken 25 years ago by people trying to escape the advancing Serb forces. The event, which will take place over the next three days commemorates the more than 8,000 Bosnian Muslims men and boys who perished 25 years ago during 10 days of slaughter after Srebrenica was overrun by Bosnian Serb forces on July 11, 1995, during Bosnia's 1992-95 war. (AP PhotoKemal Softic)

VIRUS OUTBREAK-INDONESIA-BURIAL RITUALS — As Indonesia’s death toll from the coronavirus continues to rise, the world’s most populous Muslim country finds itself at odds with protocols put in place by the government to handle the bodies of victims of the pandemic. SENT: 930 words, photos. 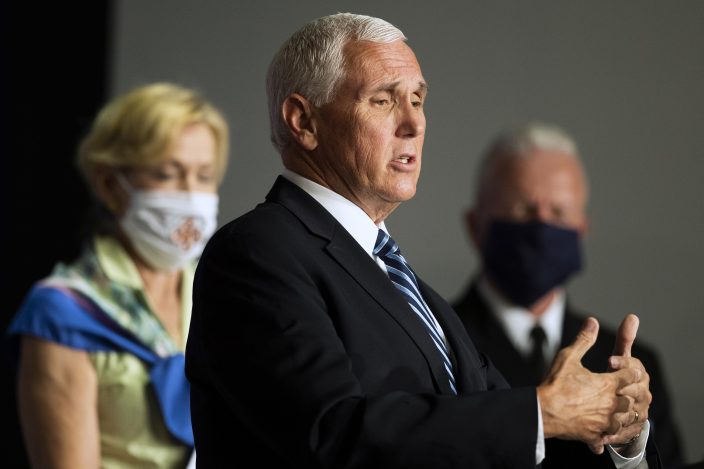 VIRUS OUTBREAK-MISSISSIPPI — At least 26 legislators and 10 others who work at Mississippi’s Capitol test positive for the coronavirus, a public health official says, as the governor implores residents to take precautions amid a rapid rise in confirmed cases statewide. SENT: 380 words, photos. 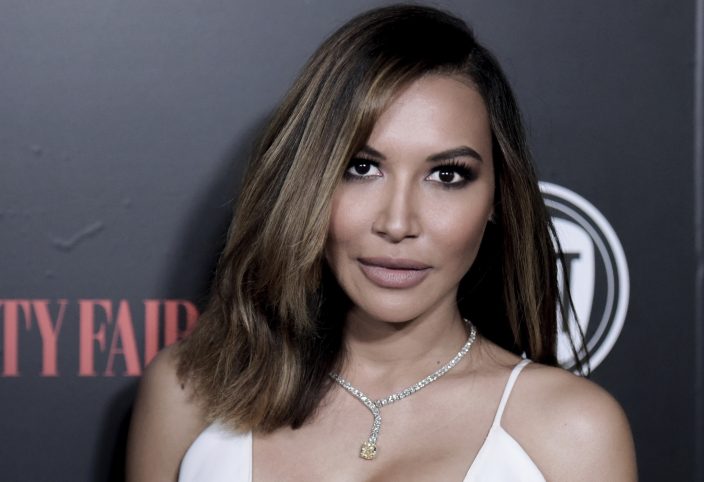 FILE - In this Feb. 23, 2016, file photo, actress Naya Rivera attends Vanity Fair and FIAT Celebration of Young Hollywood in West Hollywood, Calif. Authorities say former “Glee” star Rivera is missing and being searched for at a Southern California lake. The Ventura County Sheriff's Department late Wednesday, July 8, 2020, confirmed that Rivera is the person being searched for in the waters of Lake Piru, which is approximately 56 miles (90 kilometers) northwest of downtown Los Angeles. (Photo by Richard ShotwellInvisionAP, File)

RACIAL-INJUSTICE-PORTLAND — Downtown businesses in Portland, Oregon, have sustained about $23 million in damages and lost customers because of violent nightly protests that have brought the city to its knees, authorities say. SENT: 560 words, photos.

MANHATTAN-FEDERAL PROSECUTOR-CONGRESS — The ousted former U.S. attorney for Manhattan sits down with the House Judiciary Committee for a closed-door interview as the panel investigates politicization in the Justice Department. By Congressional Correspondent Lisa Mascaro. SENT: 500 words, photo. UPCOMING: 770 words after interview, timing uncertain.

ELECTION 2020-LATINO VOTERS — A national organization is announcing a $10 million campaign to turn out Hispanic voters in several of this year’s battleground states. SENT: 550 words.

KOREAS-US — South Korea asks a visiting senior U.S. envoy to try to revive stalled nuclear diplomacy with North Korea, which has refused to resume talks because of what it calls hostile U.S. policies. SENT: 940 words, photos.

JAPAN-FLOODS — Flooding and mudslides strand hundreds of people in scenic hot springs and hiking areas in central Japan, while rescue workers search for more people missing in the disaster that already has killed nearly 60 people in a southern region. SENT: 430 words, photos.

MLS-BLACK PLAYERS FOR CHANGE — A moving demonstration before the MLS is Back tournament opener in Florida was the effort of Black Players for Change, a group of MLS players that formed in the wake of George Floyd’s death. By Sports Writer Anne M. Peterson. SENT: 600 words, photos.

WEATHER ANALYSIS — Weather Applied Metrics has a contract with Marquee Sports Network to develop graphics that show the effect of the weather on the flight of balls for home games for the Chicago Cubs this summer. By Sports Writer Jay Cohen. SENT: 700 words, photos.

As if forward Alex Killorn and the ...

Coach Rick Bowness is encouraged b ...