Packed elevators and crowded committee rooms. Legislators sitting shoulder-to-shoulder on the House and Senate floor. People standing close to each other and talking, sometimes leaning in to whisper, without a mask in sight.

Those were common scenes at the Mississippi Capitol in June — a month that saw a historic vote to remove the Confederate emblem from the state flag — and now at least 26 lawmakers have been diagnosed with the coronavirus in the biggest known outbreak in any state legislature in the nation.

That works out to about 1 in 7 Mississippi legislators. 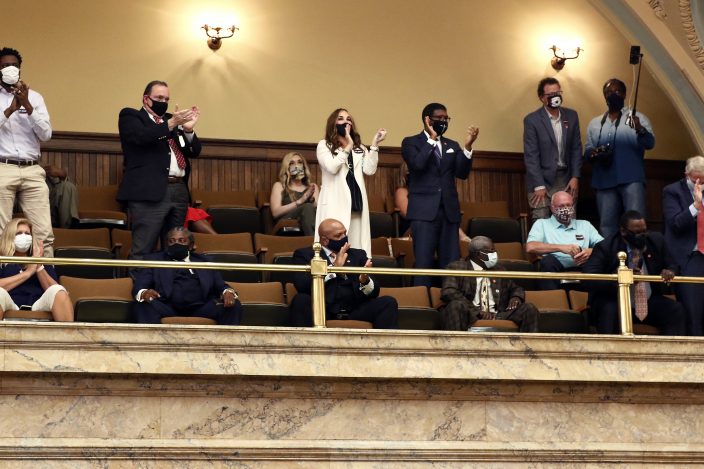 FILE - In this June 27, 2020, file photo, observers in the House gallery applaud after the lawmakers voted by two-thirds to consider the suspension of the rules and introduce a bill to take down the state flag at the Capitol in Jackson, Miss. Mississippi is seeing the largest outbreak of COVID-19 among legislators in any state. (AP PhotoRogelio V. Solis, File)

Among those testing positive in the heavily Republican body are the GOP presiding officers, House Speaker Philip Gunn and Lt. Gov. Delbert Hosemann.

None of the lawmakers has been hospitalized, according to state officials.

President Donald Trump has resisted wearing a mask, and many other Republicans around the country have cast face coverings and social distancing as an infringement on their freedom. 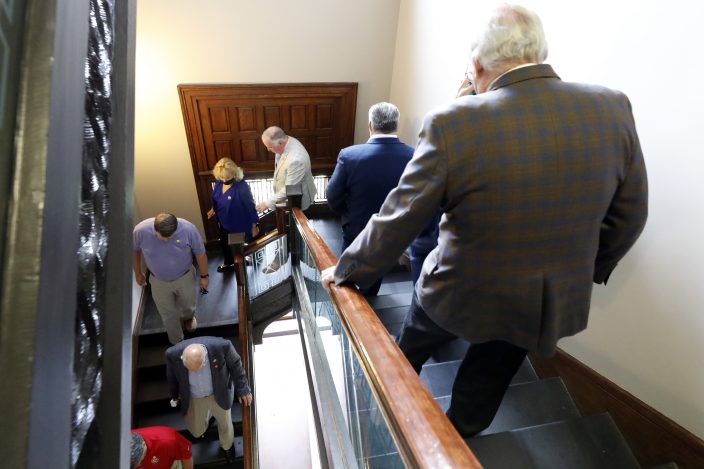 FILE - In this June 27, 2020, file photo, Republican members of the House walk to the Ways and Means conference room to caucus, at the Capitol in Jackson, Miss. Mississippi is seeing the largest outbreak of COVID-19 among legislators in any state. (AP PhotoRogelio V. Solis, File)

But around the Mississippi Capitol, not wearing a mask — or wearing one pushed below the chin — was a bipartisan activity in recent weeks. At the same time, plenty of other lawmakers from both parties covered their faces and took other precautions.

Mississippi has seen a rapid rise in confirmed cases in the past two weeks, with the total hitting nearly 33,600 by Wednesday, including at least 1,200 deaths.

In addition to the legislators, at least 10 people who work in the Capitol have been diagnosed with the virus, the state health officer said Wednesday. And the numbers could well be higher: The figures are based only on Health Department testing done in Jackson, including drive-thru testing Monday at the Capitol. Some members were tested after returning to their hometowns beginning July 1. 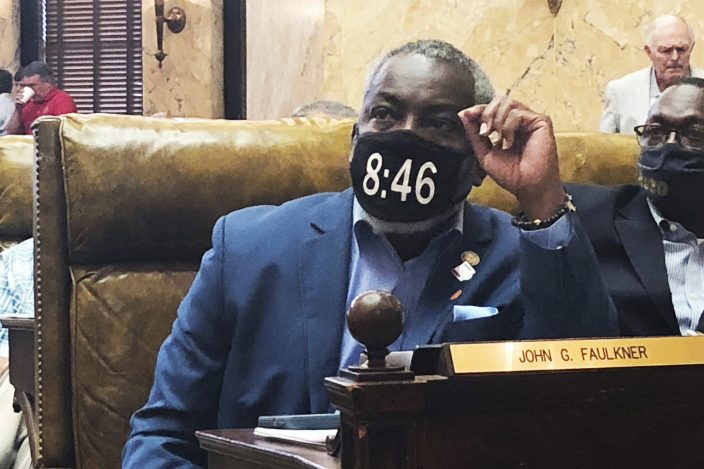 FILE - In this Saturday, June 27, 2020, file photo, Mississippi state Rep. John Faulkner, D-Holly Springs, wears a mask in honor of George Floyd, in the House chamber of the Mississippi Capitol in Jackson, Miss. Faulkner posted a video to Facebook late Wednesday, July 8, saying he tested positive for the virus and has had mild symptoms akin to a sinus infection with an occasional cough. (AP Photo Emily Wagster Pettus, File)

Reeves has urged people to wear masks and maintain social distancing, but he has not always done those things himself. He went bare-faced at the funeral of a deputy sheriff and while signing a bill to change the flag.

Republican Sen. Chad McMahan, who has tested negative, said Thursday that he washed his hands often and did his best to keep his distance from others at the Capitol. But he skipped wearing a mask because "it's quite uncomfortable.” 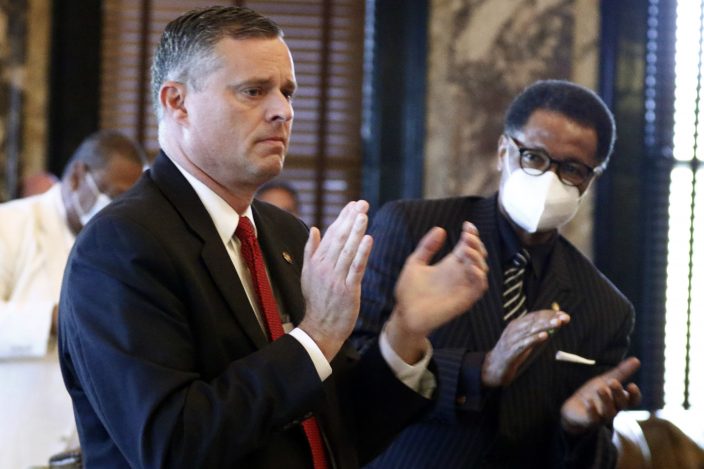 FILE - In this June 28, 2020, file photo, Sens. Chad McMahan, left, R-Guntown, and Sollie Norwood, D-Jackson, applaud after the Senate approved legislation to change the state flag, at the Capitol in Jackson, Miss. Mississippi is seeing the largest outbreak of COVID-19 among legislators in any state. McMahan said he never heard legislators express ideological reasons for going bare-faced, as he did. He said in a phone interview Thursday, July 9, that he washed his hands and did his best to keep distance between himself and others. (AP PhotoRogelio V. Solis, File)

Mississippi legislators — there were 172 most of this session — were supposed to meet from January through April but went home in mid-March because of the outbreak. They returned briefly in May during a feud the governor over spending coronavirus relief money from the federal government.

From the start of the crisis, people entering the Capitol had to undergo a screening each day, with a temperature check and a few questions. Chairs in committee rooms were spaced apart, hand sanitizer was widely available and signs told people to take precautions.

When legislators met in May, they took social distancing seriously. Only a few people at a time were allowed on the House floor, with voting conducted in small groups, and senators had to sit far from each other in their chamber. 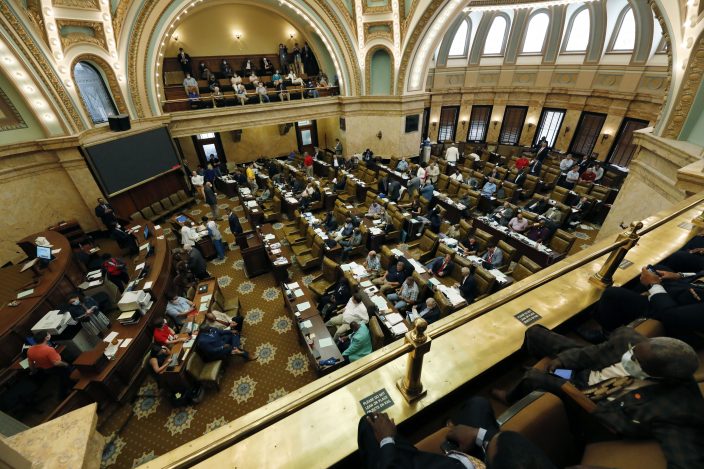 FILE - In this June 27, 2020, file photo, observers watch the House consider a number of bills at the Capitol in Jackson, Miss. Mississippi is seeing the largest outbreak of COVID-19 among legislators in any state. (AP PhotoRogelio V. Solis, File)

They returned in June, facing a July 1 deadline to write a state budget and handle other business. The longer they were together, the more the safety precautions slipped.

Legislators were soon pulled into the flag debate, and the Capitol became crowded in late June with ministers, college coaches and others urging legislators to ditch the 126-year-old banner. After the final votes, spectators cheered and hugged in the galleries, and legislators embraced and posed for photos.

A count by The Associated Press shows at least 73 lawmakers in 27 states have tested positive for the coronavirus since the outbreak began. Three lawmakers have died, in Louisiana, Michigan and South Dakota.

In Mississippi, Democratic Rep. Tom Miles tested negative in recent days. His 60-year-old mother, who was an emergency room nurse, died of the virus May 1. Miles said he wore a mask at the Capitol.

“When you get in a fishbowl of people, you’re at risk,” Miles said.

Rep. John Faulkner, a Democrat, consistently wore a mask at the Capitol — one marked “8:46” to remember George Floyd, the African American man who died after a Minneapolis police officer pressed his knee on Floyd's neck for several minutes.

Faulkner posted a video to Facebook saying he tested positive and has had mild symptoms akin to a sinus infection with an occasional cough.

“Even if you do all that you can do, there's still a possibility that you can be infected with this," he said. "If you're not practicing, following the guidelines from the CDC, then we're basically playing Russian roulette with our health and our lives and the lives of our friends and families.”