Those who recently toppled a statue of Christopher Columbus and rolled it into Baltimore's Inner Harbor will face justice, the city's mayor said Thursday.

Mayor Bernard C. “Jack” Young said he was not going to tolerate the destruction of the Columbus statue, adding that while the city supports peaceful protest, the incident was not a peaceful protest, The Baltimore Sun reported.

On Independence Day, a crowd pulled down the Columbus statue located near Little Italy, dragged it to the edge of the Inner Harbor and rolled it into the water. 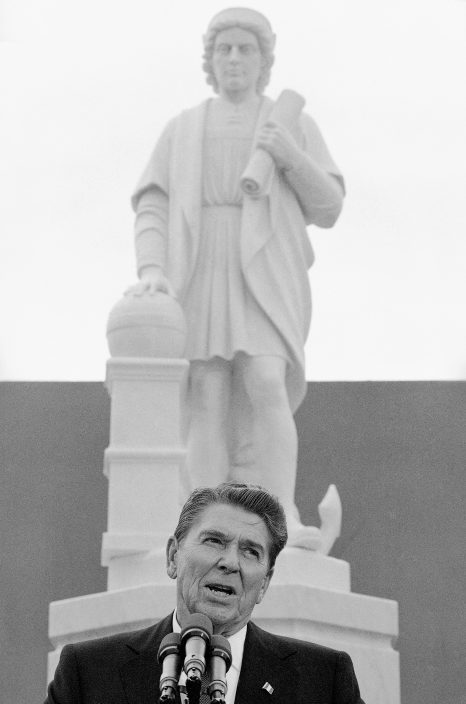 FILE - In this Monday, Oct. 9, 1984, file photo, President Ronald Reagan addresses a ceremony in Baltimore, to unveil a statue of Christopher Columbus. Pieces of the Christopher Columbus statue were retrieved from Baltimore’s Inner Harbor on Monday, July 6, 2020. WJZ-TV reports the recovery comes two days after protesters pulled down the figure from the Little Italy neighborhood and threw it into the harbor.(AP PhotoLana Harris, File)

The mayor, who lost last month’s Democratic primary and will leave office in December, said the protesters cannot “erase history. You learn from it.” Monuments, such as ones to the 15th-century Italian explorer, “should have something there to talk about what happened in the dark past.”

The statue’s fall divided many as to how the city should handle the legacy of Columbus, a famous explorer who brutalized and enslaved nonwhites during his colonization of what is now the Dominican Republic.

Gov. Larry Hogan, a Republican, decried the statue’s toppling, calling on Baltimore’s leaders to “regain control of their streets” on Sunday.

Pieces of the Columbus statue were retrieved from the Inner Harbor on Monday. Crews used a pulley and a dive team to recover pieces of the statue a day after a group of people in the Little Italy neighborhood launched an unsuccessful effort to retrieve the statue with a rope, WJZ-TV reported.

In recent weeks, statues of Columbus have also been toppled or vandalized in cities such as Miami; Richmond, Virginia; St. Paul, Minnesota; and Boston, where one was decapitated.