Hanging under blankets for audio soundproofing and working around patchy home Wi-Fi, a London animation studio is following the British motto of “keep calm and carry on” during the coronavirus pandemic to complete its first feature film in time for Disney’s planned release early next year.

Some 270 crew members have been working from home on “Ron’s Gone Wrong” in a re-imagined production process that Locksmith co-founder Sarah Smith calls a logistical “nightmare.”

“It’s exciting and complex and fun and incredibly challenging,” said Smith, a writer and producer of the film. “And once you’ve done it once, nothing else seems even vaguely interesting because it’s like the hardest thing you’ve ever done.” 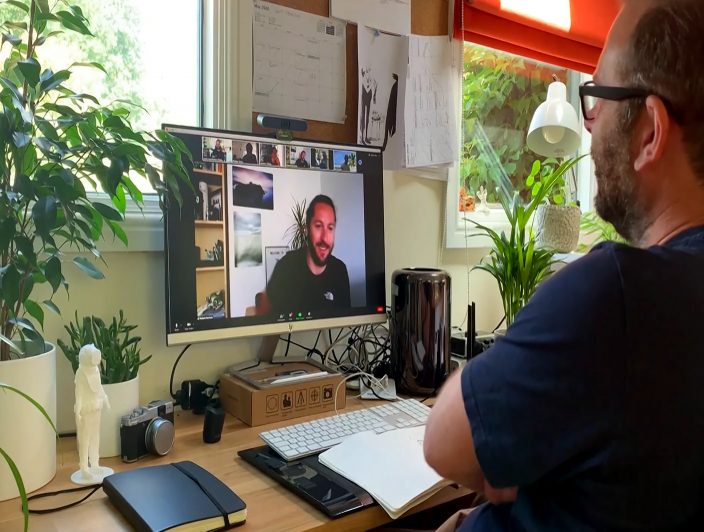 This July 2020 photo taken from video released by Locksmith Animation shows art director Justin Hutchinson-Chatburn, right, communicating on his computer during the filming of a video diary. The London animation studio Locksmith had been in production on "Ron's Gone Wrong" for more than two years before the pandemic hit. Suddenly, animators found themselves on lockdown wrestling with glitchy technology. Hutchinson-Chatburn said it’s remarkable that animation is “thriving and surviving” during the pandemic, but he’s hoping to gather with work colleagues in person soon. (Locksmith Animation via AP)

Most of the crew is remotely connecting to their office workspaces for digital modeling, rigging, animation and lighting. Editors then assemble the remote work, in some cases with temporarily out-of-sync audio.

“Looking at the stuff in edit was the hardest thing because it was out of sync and with your brain trying to figure out the fine timing of an edit, which in animation is super precise,” Smith said.

The film and television industry halted production in March because of safety fears over the coronavirus pandemic. Some are now restarting production or exploring ways to do so safely.

Locksmith had been in production for more than two years before the pandemic hit. Suddenly, animators found themselves on lockdown wrestling with glitchy technology while their nearby children stared at tablets. “Ironically and brilliantly, the film is actually about children and screen time,” Smith said.

The story is set in a world where talking robots have become children’s best friends. For one 11-year-old boy, things don’t go according to plan when his bot malfunctions.

“It’s supposed to be taken away and destroyed for being dangerous. But he keeps it, and he tries to teach it how to be a friend,” Smith said.

Voice actors have been unable to record in formal studios during the lockdown. The lead child star had to tell his grandfather to turn off the television and his mother to go offline in order to conserve home internet bandwidth for a remote recording session, Smith said.

Studio art director Justin Hutchinson-Chatburn said it’s remarkable that animation is “thriving and surviving” during the pandemic, but he’s hoping to gather with work colleagues in person soon.

“It will be great when we can all get down the pub because there’s going to be some big wrap parties that we are all going to want to go to,” he said.

False claims that Kamala Harris is ...