Simon Pagenaud says racing hasn’t been quite the same without spectators to cheer the drivers on for the opening stages of the IndyCar season.

“It’s strange to go to the track without any fans,” said Peganaud, who ranks second to Scott Dixon in the point standings. “It’s like being at a test session. Without the hype from the crowd, you don’t get the feeling of being a gladiator or a superstar. It’s quiet. It doesn’t have that racing feel.”

Pagenaud won’t have to worry about that this weekend. FILE - In this Saturday, June 6, 2020, file photo, Simon Pagenaud prepares for a IndyCar auto race practice at Texas Motor Speedway in Fort Worth, Texas. Pagenaud says racing hasn’t been quite the same without having spectators to cheer the drivers on for the opening stages of the IndyCar season. The IndyCar series will welcome fans for the first time of the year during the REV Group Grand Prix doubleheader Saturday and Sunday, July 11-12, at Road America in Plymouth, Wisconsin. (AP PhotoTony Gutierrez, File)

The IndyCar series will welcome fans for the first time this season during the REV Group Grand Prix doubleheader Saturday and Sunday at Road America in Elkhart Lake, Wisconsin.

Is is only the third race on the schedule after the coronavirus pandemic caused the season to start nearly three months late. Road America’s setup makes it an ideal testing ground for welcoming back fans. The sprawling, 640-acre layout surrounding the four-mile road course allows fans to practice social distancing and roam around the property rather than crowding into a grandstand.

Organizers aren’t placing a limit on the number of spectators who can attend because the facility can hold so many people. Road America allowed fans back in for its events starting last month. 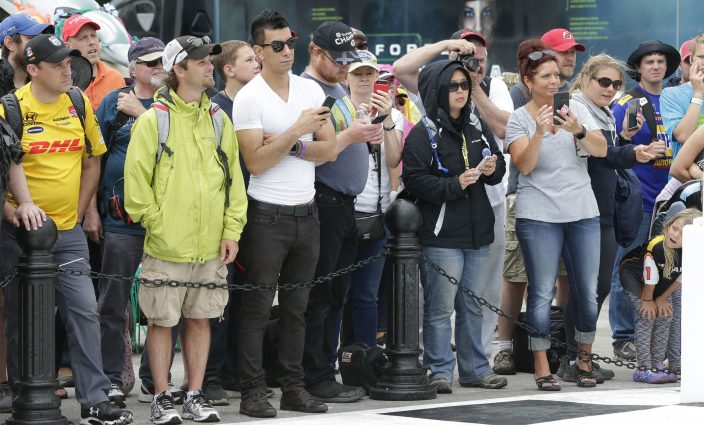 “It really makes the race weekend,” said Rinus VeeKay, who drives for Ed Carpenter Racing. “Normally when you drive through there, you can smell the barbecues. It would be less fun if we had no fans there.’’

IndyCar also plans to have spectators next weekend in Iowa, where the oval track has grandstands. The series is treating each event on a case-by-case basis based on local and state regulations in place where a race is being held.

For example, Saturday’s race at Indianapolis Motor Speedway took place without spectators because of local regulations in place during the planning stages of the event. IndyCar organizers are hoping fans will fill up to 50% of the speedway’s capacity for the Indianapolis 500 on Aug. 23, when they expect the state’s reopening plan to allow spectators. 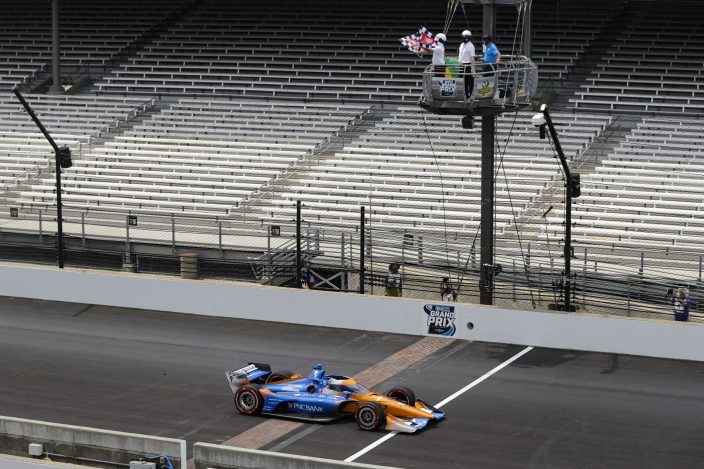 FILE - In this Saturday, July 4, 2020, file photo, race driver Scott Dixon, of New Zealand, takes the checkered flag as he crosses the startfinish line to win the IndyCar auto race at Indianapolis Motor Speedway in Indianapolis. The IndyCar series will welcome fans for the first time of the year during the REV Group Grand Prix doubleheader Saturday and Sunday, July 11-12, at Road America in Plymouth, Wisconsin. (AP PhotoDarron Cummings, File)

Fans this weekend will get temperature checks at gates and receive masks and hand sanitizer as they enter. Wearing a mask will be encouraged but not required.

Some areas will be off limits. Only essential racing personnel will have access to the paddock area.

“It’s still going to be a little bit different because fans aren’t going to be around the paddock,” driver Colton Herta said. “They’re not going to be really able to see us up close.’’

Even so, the drivers are grateful they’ll have spectators at all.

“Race fans make racing interesting,’’ Pagenaud said. “It’s a party every weekend when we go racing and without them, it is not.”

Dixon has won the first two races this season, at Fort Worth and Indianapolis. The only drivers to open an IndyCar season with at least three straight victories are A.J. Foyt (seven in 1964), Al Unser (three in 1971) and Sebastien Bourdais (four in 2006).

This is the first of two straight weekend doubleheaders, with Iowa hosting a pair of races next weekend.

Drivers are hoping the heat lets up after they endured sweltering conditions in Indianapolis. Conor Daly tweeted that he lost over 12 pounds at Indianapolis. Pagenaud said he shed 8 ½ pounds.

Drivers believe the Road America course won’t be as grueling with all of its straightaways despite its 14 turns.

“We have practice, qualifying and a full race all in one day,” Herta said. “That’s tough on its own. Then you do that twice. It’s going to be a tough one. Luckily, Road America is probably one of the least physical places we go to just because you have the long straights to rest. As long as it’s not too hot.’’

Alexander Rossi won at Road America last year but is off to a slow start this season and is 23rd in the standings. Rossi is part of Andretti Autosport, which is struggling overall without a single podium finish from its five drivers through the first two races.