Country stars, veterans and longtime friends talked about the faith and patriotism of Charlie Daniels at a funeral Friday for the country singer and fiddler.

Daniels, who died Monday at the age of 83, was given a star-studded salute by artists Travis Tritt, Trace Adkins, Vince Gill and Gretchen Wilson during a funeral service in Murfreesboro, Tennessee.

Hundreds were on hand for the service and his casket was surrounded by flags, red and white flowers, his fiddle, a Gibson Les Paul electric guitar and a belt buckle with a cross, The Tennessean reported. 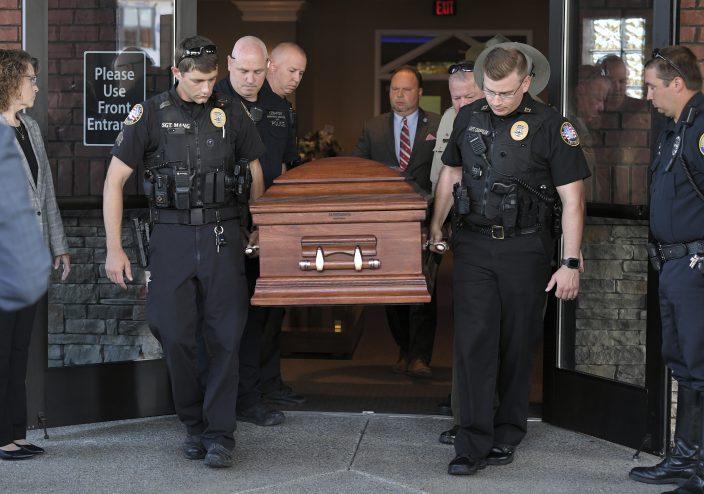 The casket containing country singer Charlie Daniels is carried from the Sellars Funeral Home in Mt. Juliet, Tenn., before funeral services on Friday, July 10, 2020. The Country Music Hall of Famer died Monday due to a hemorrhagic stroke. (Shelley MaysThe Tennessean via AP)

Daniels went from being an in-demand session musician who played with the greats including Bob Dylan and Leonard Cohen to a staple of Southern rock with his hit “Devil Went Down to Georgia."

Many of the speakers talked about his Christian faith and his devotion to the U.S. military, two passions that were the core of what he believed in.

Tritt, who sang “Amazing Grace,” said Daniels wore his faith on his sleeve, but wasn't preachy.

“If you believed differently than he did, that was OK. But he wasn’t ashamed to tell you at any given time how much he loved the Lord." said Tritt.

“He always said two things protected America: The grace of God and the United States military,” said speaker David Rutherford, who is a veteran.

Gill combined his classic “Go Rest High on That Mountain,” with “America the Beautiful," and talked about their 44-year friendship.

“He was one of those guys you were always grateful to see,” Gill said. “It always made your day when you got to see that man smile."