Amid a summer of racial unrest and calls for more diversity in leadership, President Donald Trump lags Democratic rival Joe Biden in the percentage of people of color on their campaign staffs, according to data the campaigns provided to The Associated Press.

Twenty-five percent of the Republican president's senior staff are nonwhite, compared to 36% of Biden’s senior staff. Biden’s overall campaign team is 35% nonwhite; Trump’s campaign did not provide a comparable number.

And neither campaign provided racial breakdowns for their nonwhite staff, nor the total number of staffers who are on their payrolls, including senior staff. 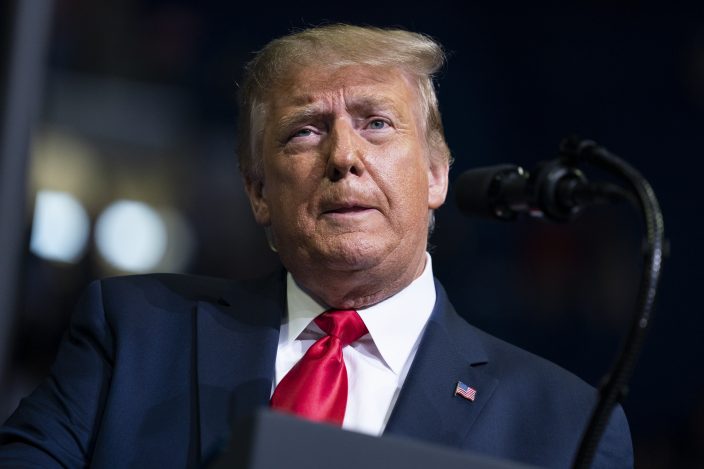 FILE - In this June 20, 2020, file photo President Donald Trump speaks during a campaign rally at the BOK Center in Tulsa, Okla. Amid a summer of racial unrest and calls for more diversity in leadership, President Donald Trump lags Democratic rival Joe Biden in the percentage of people of color on their campaign staffs, according to data the campaigns provided to The Associated Press. (AP PhotoEvan Vucci, File)

Advocates for minority groups say staff diversity is necessary to ensure political candidates hear a full range of voices and viewpoints to help them understand the concerns of various communities and interest groups — especially at a time when racial injustice is front and center in the national conversation. And while Biden has an edge on Trump, there is plenty more to be done in presidential campaigns overall.

Jennifer Lawless, commonwealth professor of politics at the University of Virginia, said “there are still a lot of milestones that haven’t been hit” by political campaigns, such as a Black man or woman directing — and winning — a presidential campaign. And she said having diverse staff at lower levels in campaigns can help increase the pool of future managers, finance chairs and others.

“It’s all part of the pipeline,” Lawless said.

Trump's campaign makeup got a double-take in June when Vice President Mike Pence tweeted — and later deleted — a photo from his visit to campaign headquarters. The photo at first drew attention for the lack of social distancing and use of face masks among the staff. But it also was notable for the sea of mostly white faces.

Eric Rodriguez, senior vice president of policy and advocacy at UnidosUS, said the Biden team had more Latinos in senior positions than Trump.

“You need people from those communities to be able to make those connections,” said Rodriguez, whose organization used to be called the National Council of La Raza.

The president’s daughter-in-law, Lara Trump, who is white, former White House aide Mercedes Schlapp, who is Cuban American, and Katrina Pierson, who is Black and worked on Trump’s 2016 campaign, are among the highest-profile senior female staffers working to help him get reelected.

Others include former Fox News host Kimberly Guilfoyle, now a top fundraiser for the reelection effort and the girlfriend of Trump's son, Donald Trump Jr., and Hannah Castillo, a Latina and the campaign’s coalitions director. Guilfoyle's mother is Puerto Rican.

Biden senior adviser Symone Sanders, who is Black, is the campaign’s highest-ranking person of color and, at 30, is the youngest member of his inner circle. The candidate also recently brought on several African Americans who worked for President Barack Obama, including Karine Jean-Pierre, formerly an NBC News and MSNBC political analyst.

Jamal Brown, a spokesperson for Biden, said the former vice president's campaign reflects the “diversity, breadth and promise of America.”

“He believes our democracy is strongest when people see themselves reflected in their government,” added Brown, who is Black.

The killing in May of George Floyd, who was Black, by a white Minneapolis police officer sparked nationwide protests against racial injustice and calls for greater minority representation across the board in society that brought fresh scrutiny to the presidential campaigns.

Biden had faced questions earlier in the campaign about the lack of diversity on his staff. Along with adding more people of color to his campaign, Biden has promised an administration that “looks like America” if he is elected on Nov. 3.

The U.S. population is about 60% white, 19% Latino and 13% Black, according to Census Bureau estimates.

Trump has not made a similar pledge about a potential second term. His campaign declined to discuss minority representation on the campaign staff.

Four women currently serve in Trump's Cabinet: CIA Director Gina Haspel and Education Secretary Betsy DeVos, both of whom are white; Jovita Carranza, a Latina who leads the Small Business Administration; and Transportation Secretary Elaine Chao, who was born in Taiwan.

Housing Secretary Ben Carson is the only Black member of the Cabinet.

Rodriguez summed up the Biden campaign strategy as focused on winning support from a diverse pool of voters, especially in battleground states where large numbers of Latino and Black voters live. He characterized Trump’s strategy as being “really all about the base” and attempting to replicate his successful 2016 campaign playbook, which used immigration as a wedge issue.

“The strategy is to run on racial division,” Rodriguez said of the president, who has begun to use the racial tensions that surfaced after Floyd’s killing in his reelection pitch.

Still, Trump and his campaign make regular appeals to Black and Latino voters.

The president regularly cites employment gains for these groups before the coronavirus pandemic struck, and he continues to showcase legislation he signed to overhaul criminal sentencing procedures and provide permanent funding for historically Black colleges and universities.

This week, Trump was surrounded by Latino American leaders as he announced a new advisory commission to help Hispanic Americans with economic and educational opportunities.

But the event also highlighted how far Trump has to go in winning support from people of color. Critics of Trump's record with Hispanics called for a boycott of the Goya food company after its president praised Trump at the event.

The president does have strong support among some people of Cuban and Venezuelan descent, though, because of his tough stance against authoritarian leaders in those countries.

Trump’s campaign defined its senior staff as “senior leaders who meet regularly to make decisions. People with authority,” and did not elaborate.