NEW DELHI: India’s coronavirus cases have passed 800,000 with the biggest spike of 27,114 cases in the past 24 hours, causing nearly a dozen states to impose a partial lockdown in high-risk areas.

The new confirmed cases took the national total to 820,916. The Health Ministry on Saturday also reported another 519 deaths for a total of 22,123.

A surge in infections saw the cases jumping from 600,000 to more than 800,000 in nine days. The ministry said the recovery rate was continuing to improve at more than 62%. 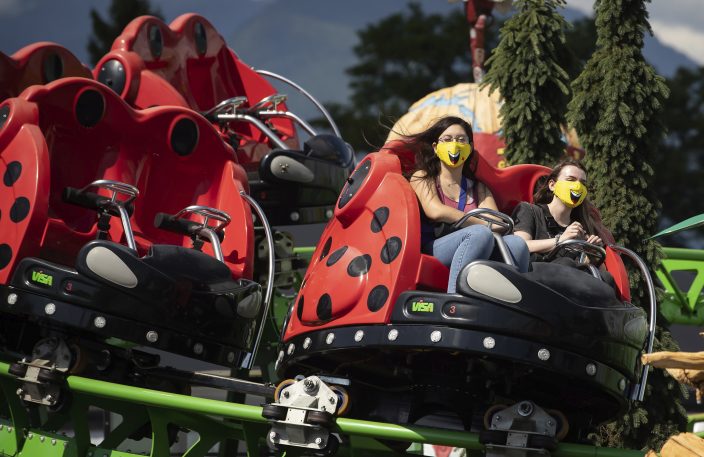 People wearing face masks against the spread of the coronavirus ride an attraction at the Playland amusement park at the Pacific National Exhibition, in Vancouver, British Columbia, Friday, July 10, 2020. (Darryl DyckThe Canadian Press via AP)

Eight of India’s 28 states, including the worst-hit Maharashtra, Tamil Nadu and New Delhi, account for nearly 90% of all infections.

The most populous state of Uttar Pradesh, with nearly 230 million people, imposed a weekend lockdown while several others announced restrictions in districts reporting major spikes. 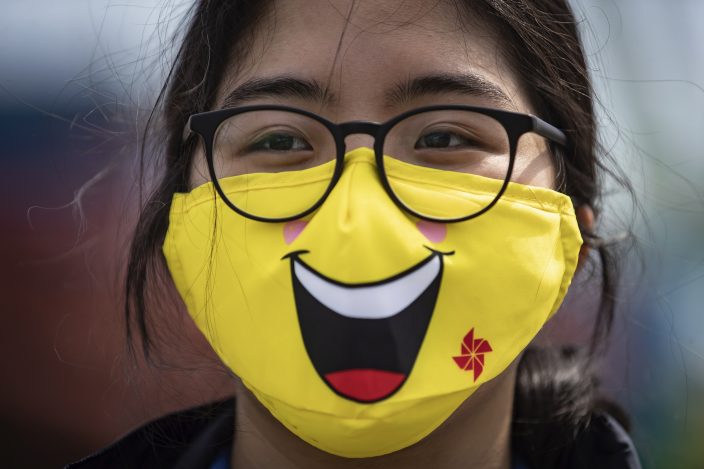 Ride operator Van Mai wears a face mask against the spread of the coronavirus while working at the Playland amusement park at the Pacific National Exhibition, in Vancouver, British Columbia, Friday, July 10, 2020. (Darryl DyckThe Canadian Press via AP)

— US bets on untested company to deliver COVID-19 vaccine

— Some pastors are ignoring a new California ban on singing or chanting in church to slow the spread of the coronavirus. The American Center for Law and Justice, which has ties to President Donald Trump, is encouraging church leaders to defy the order and says it will sue the state. 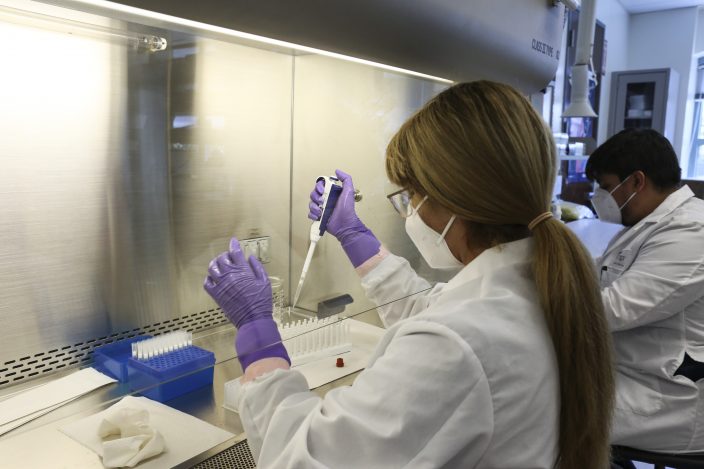 — In his push to get schools and colleges to reopen this fall, President Donald Trump is again taking aim at their finances, this time threatening their tax-exempt status.

— The coronavirus storm has arrived in South Africa and COVID-19 wards are overflowing. Medical oxygen is already low in hospitals at the epicenter of the country’s outbreak, Gauteng province, home to the power centers of Johannesburg and the capital, Pretoria. 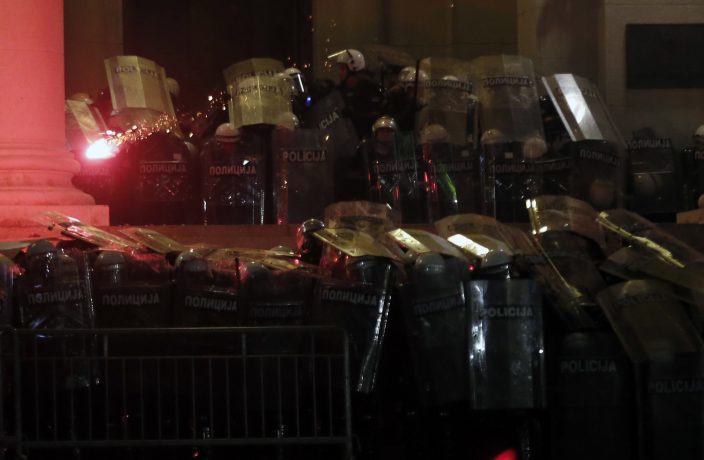 Serbian riot police guard the Serbian parliament building during a protest in Belgrade, Serbia, Friday, July 10 2020. Hundreds of demonstrators tried to storm Serbia's parliament on Friday, clashing with police who fired tear gas during the fourth night of protests against the president's increasingly authoritarian rule. The protests started on Tuesday when President Aleksandar Vucic announced that Belgrade would be placed under a new three-day lockdown following a second wave of confirmed coronavirus infections. (AP PhotoDarko Vojinovic)

BEIJING — New coronavirus cases have dropped sharply in China, and authorities are turning their attention to concerns that the virus could spread through imported food.

Those worries have risen since a June outbreak in Beijing that was linked to the city’s largest wholesale market. 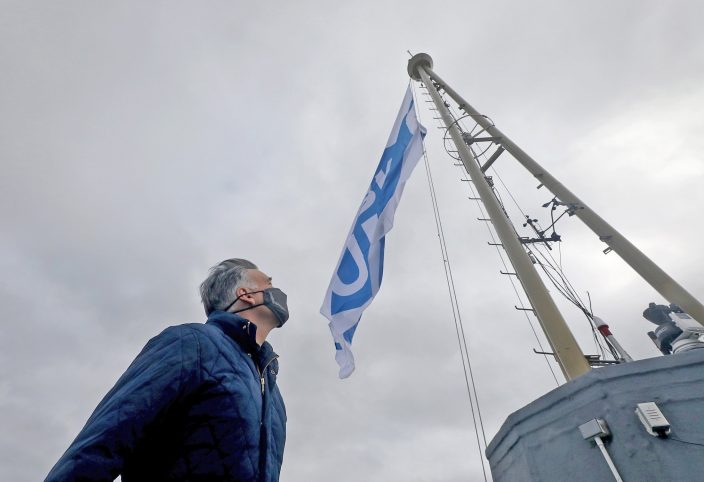 King County Executive Dow Constantine watches a flag that reads "Mask Up" on top of the Space Needle in Seattle, Friday, July 10, 2020. Statewide, everyone over age 5 in an indoor public space, or in an outside public space when unable to physically distance from others, is required to wear a face covering amid the coronavirus pandemic. (Greg GilbertThe Seattle Times via AP, Pool)

Testing has been stepped up on incoming food shipments, and on Friday customs officials said they are halting imports from three Ecuadorian shrimp producers after tests showed the virus present in recent shipments.

Authorities say the coronavirus was detected on the outer packaging of the shipments July 3. The inner packaging and the shrimp themselves tested negative. Products from the three companies received after March 12 have been ordered to be returned or destroyed.

SEOUL, South Korea -- South Korea has reported 35 new cases of the coronavirus, bringing its caseload to 13,373 infections and 288 deaths. 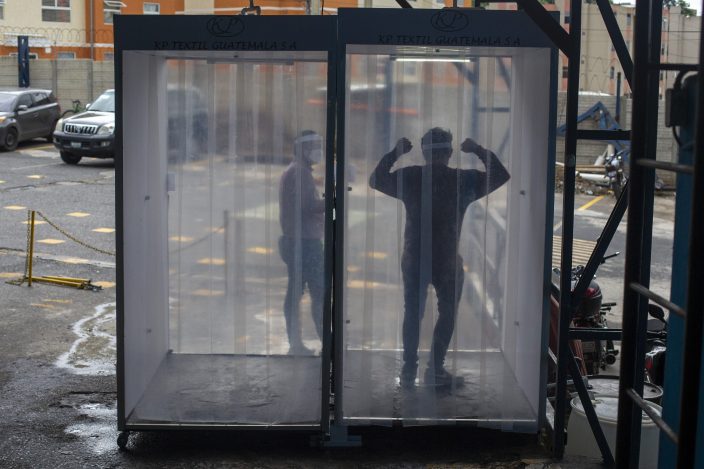 A worker is disinfected in a chamber as he arrives for his shift at the Korean-owned firm K.P. Textil in San Miguel Petapa, Guatemala, Friday, July 10, 2020. Employees returned to work after more than a month-long quarantine related to a COVID-19 outbreak involving dozen of workers, implementing new safety protocols to prevent the spread of the virus. (AP PhotoMoises Castillo)

South Korea’s Centers for Disease Control and Prevention said Saturday that 13 of the new cases were in the densely populated Seoul metropolitan area, which has been at the center of a virus resurgence since late May.

Infections were also reported in other major cities such Daejeon and Gwangju, where patients have been tied to various places, including churches, a Buddhist temple, churches, nursing homes and a sauna.

Fifteen of the new cases were linked to international arrivals as the virus continues to spread in Asia, North America and elsewhere.

LOUISVILLE, Ky. — Kentucky’s governor says a new requirement for people to wear face masks in public took effect at 5 p.m. Friday despite a judge’s restraining order related to pandemic restrictions though not specifically on the face covering rule.

Gov. Andy Beshear says the mask mandate is “mandatory, regardless of anything else that’s out there.”

The Scott County court judge issued an order Thursday blocking the governor from issuing executive orders related to the pandemic unless he first meets a list of requirements.

Beshear calls the restraining order “bizarre” and “not legal.” He says the ruling will be appealed and likely end up before the Kentucky Supreme Court.

CANBERRA, Australia -- Australia’s Therapeutic Goods Administration has given provisional approval to the drug remdesivir, an experimental medicine that has shown promise in the recovery time of the most seriously ill COVID-19 patients.

The approval comes as Australia is seeing a sharp increase in coronavirus infections in the state of Victoria, which reported a record 288 new confirmed cases Friday.

Authorities say remdesivir will be available only to patients who are severely ill, require oxygen or high-level support to breathe, and are in hospital care. It is the only drug licensed by both the U.S. and the European Union as a treatment for people with severe illness from the coronavirus.

With a population of 26 million, Australia has recorded more than 9,000 coronavirus cases, with 107 deaths.

AUSTIN, Texas — Texas Gov. Greg Abbott says “things will get worse” in the state as more than 10,000 patients are now hospitalized with the coronavirus.

The deadliest week of the pandemic yet in Texas continued Friday with 95 new deaths.

On the Texas-Mexico border, Starr County Judge Eloy Vera says his rural community is trying to get a refrigerated trailer because the local funeral home can’t keep up with more than two bodies a day.

Texas members of Congress are asking the Trump administration for a field hospital in the Rio Grande Valley. They warn in a letter sent Friday to the health and human services secretary Azar that there is “no indication that case counts will level out soon.”

SALEM, Ore. — Oregon health officials are urging people to limit indoor social gatherings to fewer than 10 people during the next three weeks amid a “troubling” surge in coronavirus cases.

New projections by the Oregon Health Authority predict that if transmission of the virus continues at the current pace, the estimated number of new daily, confirmed infections could reach anywhere from 1,100 to 3,600.

The director of the Oregon Health Authority says that “we are calling on Oregonians to take action, to help us bring down the spread of COVID-19 and get it under control so we can again bend the curve back down.”

Oregon officials reported 275 new confirmed and presumptive COVID-19 cases Friday, bringing the total statewide to 11,454. There have been at least 232 deaths.

HARRISBURG, Pa. — Confirmed coronavirus infections in Pennsylvania hit over 1,000 on Friday in the state’s highest one-day mark since May, with state health officials blaming the rising numbers on crowded bars and out-of-state travel to virus hot spots.

Pennsylvania reported more than 1,000 new confirmed infections for the first time since May 10. About 175 of the newly reported cases arose from a batch of private lab results, according to the state Health Department.

State health officials warned in an alert to hospitals, doctors offices and other heath care providers that increasing numbers of young people are contracting the virus. The Health Department also said that local outbreaks are being traced to out-of-state travel and to parties, restaurants, bars and other social gatherings.

The senator wasn’t named in a statement from Senate leader Phil Berger, who says it’s a Republican male.

Berger says the senator had already taken a test that came back negative before returning to Raleigh this week. He took a second test Thursday because his spouse was scheduled for a medical procedure. That test came back positive Friday, according to Berger.

The senator hasn’t had any symptoms during this period. Berger says: “He is staying home and feels well.”

The full legislature isn’t expected to return to work until September.