Turkey’s parliament passed controversial legislation amending laws governing attorneys and bar associations on Saturday, despite protests from critics who say the move could limit the independence of lawyers and reduce the professional associations’ clout.

The new law, submitted by President Recep Tayyip Erdogan’s party, was passed after days of heated debate and following scuffles between police and lawyers protesting the legislation.

The government has said the law would create a “more democratic and pluralistic” system. But detractors say the measure aims to lessen the influence of major bar associations that have been outspoken critics of Erdogan’s government and have documented rights violations. 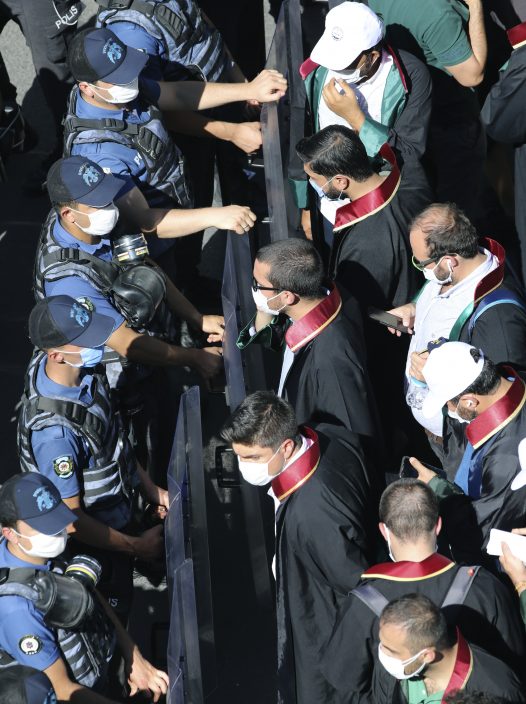 Riot police officers stand at a security barricade as lawyers try to walk to the parliament, in Ankara, Turkey, Friday, July 10, 2020. Turkey's Bar Associations continue to protest against the government's plans to amend laws regulating on lawyers and their associations. (AP PhotoBurhan Ozbilici)

The change comes amid widespread criticism of the independence of the judiciary and the rule of law in Turkey.

The law allows multiple bar associations to be established if at least 2,000 lawyers apply in provinces with more than 5,000 lawyers. It also scraps proportional representation of bars in the national umbrella organization, in effect decreasing the number of delegates from Turkey’s major cities, which could reduce their funding.

The law would affect the three major bar associations of Istanbul, Ankara and Izmir. 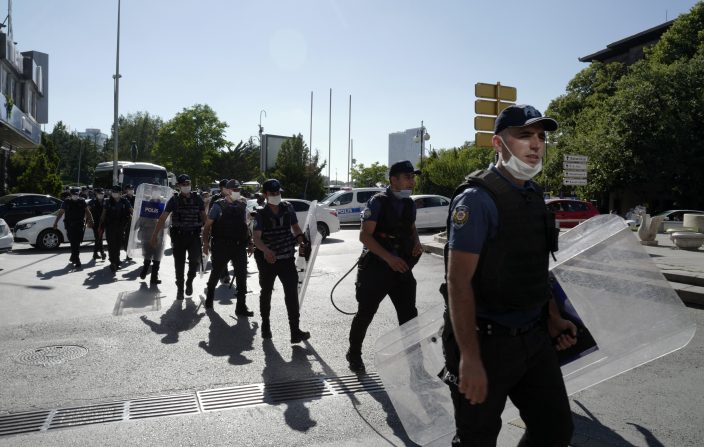 Riot police officers follow lawyers who try to walk to the parliament, in Ankara, Turkey, Friday, July 10, 2020. Turkey's Bar Associations continue to protest against the government's plans to amend laws regulating on lawyers and their associations. (AP PhotoBurhan Ozbilici)

The main opposition Republican People’s Party, or CHP, has vowed to ask Turkey’s Constitutional Court's abolish it. Ozgur Ozel, a top lawmaker from the party, said Friday the law was an “unmatched level of malignancy" aiming to “prune” lawyers' power for defense. He slammed the government for excluding the lawyers from debate.

The legislation has sparked weeks of protests by the bar associations. In June the heads of 80 associations marched to the capital Ankara where they were met with police barricades. Thousands of lawyers protested outside Istanbul’s main courthouse when the bill was presented to parliament. Bar association leaders waited for days outside parliament to be allowed into committee meetings where the draft law was discussed. Officials banned or dispersed other protests citing the COVID-19 pandemic.

Ruling party lawmakers pushing the bill said nearly 128,000 lawyers working in Turkey needed more bar associations to get support and training. Officials say the amendment ensures “justice in representation,” requiring all provincial association to send an equal number of delegates and an additional delegate for every 5,000 lawyers. 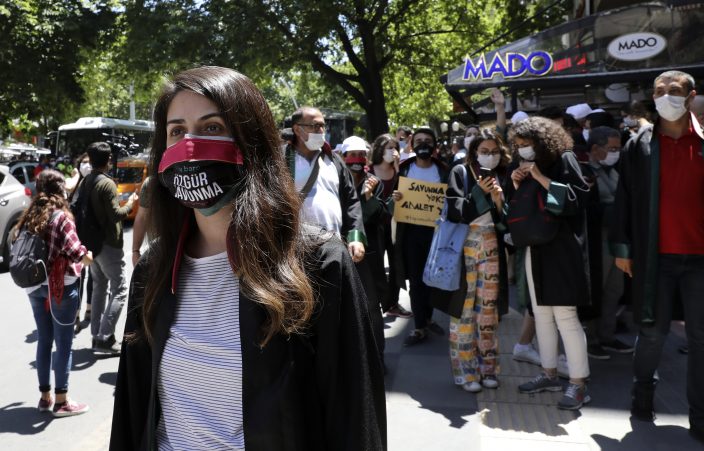 The ruling party introduced the bill after the Ankara Bar Association accused the head of the Religious Affairs Presidency of inciting hatred against homosexuals and called for his removal from office. Erdogan, a devout Muslim, came to the official’s defense and slammed the Ankara lawyers.

Human Rights Watch called the law “politically divisive" in a report this week.

“While the creation of rival bar associations in cities might at face value seem to offer lawyers a greater choice over which professional body to join, the government’s own statements about the plan and the timing and means by which it is being introduced demonstrate a political purpose unrelated to legitimate efforts to advance or strengthen standards in the legal profession,” the rights group said.