South Africa’s confirmed coronavirus cases have doubled in two weeks to a quarter-million, and India on Saturday saw its biggest daily spike as its total passed 800,000. Inequality concerns are growing as health workers seek better protection while some among the rich are hoarding equipment at home.

Globally more than 12 million people have been infected by the virus, according to data compiled by the Johns Hopkins University of Medicine. More than a half-million have died. Shortages of testing materials and poor data collection in some countries mean the true numbers are unknown.

Some of the worst-affected nations are among the world’s most unequal. South Africa leads them all, with the pandemic exposing the gap in care. 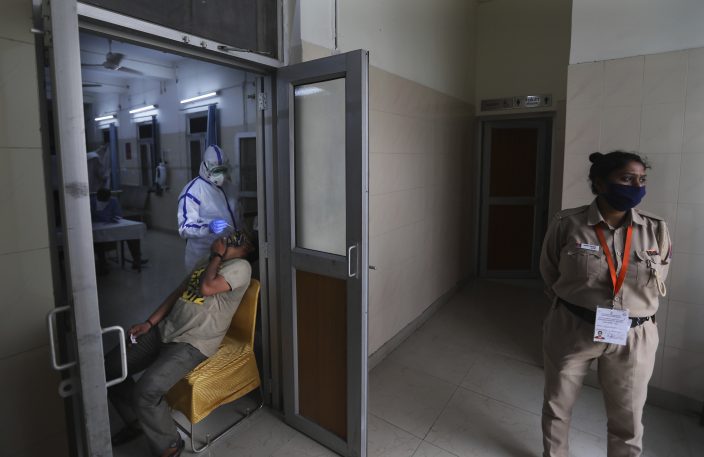 A health worker takes a nasal swab of a person for COVID-19 test as a policewoman stands guard at a local dispensary in New Delhi, India, Saturday, July 11, 2020. India has overtaken Russia to become the third worst-affected nation by the coronavirus pandemic. (AP PhotoManish Swarup)

In Johannesburg at South Africa’s epicenter, badly-needed oxygen concentrators, which help people with COVID-19 breathe, are hard to find as private businesses and individuals are buying them up, a public health specialist volunteering at a field hospital, Lynne Wilkinson, told The Associated Press.

Meanwhile South Africa’s struggling public hospitals are short on medical oxygen — and they are now seeing a higher proportion of deaths than in private ones, the National Institute for Communicable Diseases says.

South Africa now has more than 250,000 confirmed cases, including more than 3,800 deaths. To complicate matters, the country's struggling power utility has announced new electricity cuts in the dead of winter as a cold front brings freezing weather. Many of the urban poor live in shacks of scrap metal and wood.

And in Kenya, some have been outraged by a local newspaper report citing sources as saying several governors have installed intensive care unit equipment in their homes. The country lost its first doctor to COVID-19 this week.

“The welfare, occupational safety & health of frontline workers is a non-negotiable minimum!!” the Kenya Medical Practitioners, Pharmacists and Dentists Union tweeted after her death. On Saturday, the union and other medical groups called on President Uhuru Kenyatta to implement a promised compensation package to ease the “anxiety and fear that has now gripped health care workers."

More than 8,000 health workers across Africa have been infected, half of them in South Africa. The continent of 1.3 billion has the world's lowest levels of health staffing and more than 550,000 cases, and the pandemic is reaching “full speed," the Africa Centers for Disease Control and Prevention says.

Many parts of the world are now struggling with trying to reopen their economies and facing a fresh wave of infections.

Infected people are packing India's public hospitals as many are unable to afford private ones that generally uphold higher standards of care.

In Australia, the beleaguered state of Victoria received some good news with health officials reporting 216 new cases in the past 24 hours, down from the record 288 the previous day. It hopes a new six-week lockdown in Melbourne, Australia’s second-largest city with a population of 5 million, will curb the spread.

And in Latin America, where inequality is sharp and Brazil and Peru are among the world's five most badly hit countries, the COVID-19 pandemic is sweeping through the continent's leadership, with two more presidents and powerful officials testing positive in the past week.

China blasts US for Taiwan visit while virus spreads at ...

A Chinese official lashed out at U ...