Joe Biden stood in a Pennsylvania metal works shop, just miles from his boyhood home, and pledged to define his presidency by a sweeping economic agenda beyond anything Americans have seen since the Great Depression and the industrial mobilization for World War II.

The prospective Democratic presidential nominee promised the effort would not just answer a pandemic-induced recession, but address centuries of racism and systemic inequalities with “a new American economy” that “finally and fully (lives) up to the words and the values enshrined in the founding documents of this nation — that we’re all created equal.”

It was a striking call coming from Biden, a 77-year-old establishment figure known more as a back-slapping deal-maker than visionary reformer. But it made plain his intention to test the reach of liberal populism as he tries to create a coalition that can defeat President Donald Trump in November. 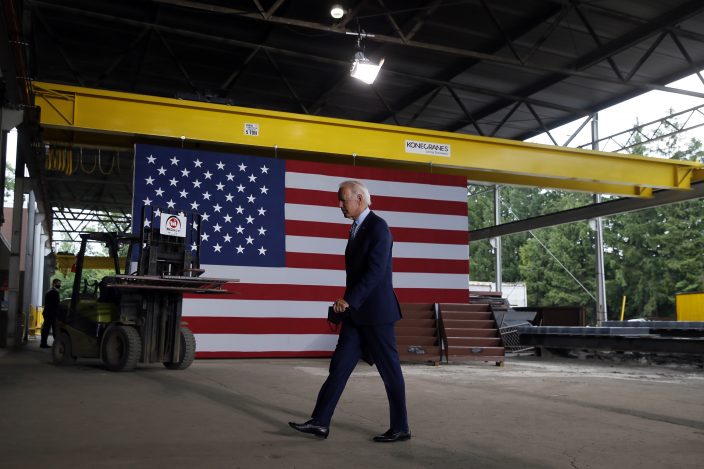 FILE - In this July 9, 2020, file photo Democratic presidential candidate former Vice President Joe Biden walks from the podium after speaking at McGregor Industries in Dunmore, Pa. Biden is pledging to define his presidency by a sweeping economic agenda beyond anything Americans have seen since the Great Depression and the industrial mobilization for World War II. (AP PhotoMatt Slocum, File)

Trump and his Republican allies argue that Biden’s positioning, especially his ongoing work with progressives, proves he’s captive to a “radical” left wing. Conversely, activists who backed Bernie Sanders or Elizabeth Warren in the Democratic primary were encouraged, yet cautious, about Biden's ability to follow through while conceding that his plans on issues including climate action and criminal justice still fall short of their ideals.

Biden’s inner circle insists his approach in 2020 is the same it’s been since he was elected to the Senate in 1972: Meet the moment.

“He’s always evolved,” said Ted Kaufman, Biden’s longest-serving adviser. “The thing that’s been consistent for his entire career, almost 50 years, is he never promises things that he doesn’t think he can do.” 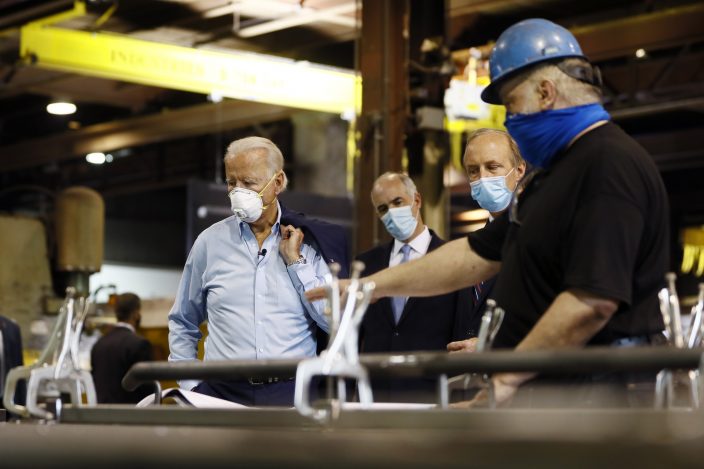 Kaufman, who succeeded Biden in the Senate when he ascended to the vice presidency, said Biden’s core identity hasn’t changed: “progressive Democrat,” friendly to labor and business, consistent supporter of civil rights, believer in government and the private sector. What’s different in 2020, he said, are the country’s circumstances — a public health crisis, near-Depression level unemployment, a national reckoning on racism — and the office Biden now seeks.

“If you want to get something done, encourage it,” Kaufman said. “What he learned over history watching campaigns is that you put forth a program, and then you come into office, and everybody involved knows that’s the program you’re offering.”

Biden’s evolution has been on display from the start of his campaign as he’s tacked left both in substance and style while trying to preserve his pragmatist brand.

At the start of the Democratic primary, Biden was positioned as offering a moderate alternative to Sanders’ call for a “political revolution” and Warren’s push for “big structural change.”

Biden noted that his health care platform put him to the left of 2016 nominee Hillary Clinton and President Barack Obama, who had jettisoned a “public option” from his 2010 health care law, angering liberal Democrats.

And on race, even before the recent national uprising against police violence, Biden spoke often of the nation’s systemic failure “to live up to” the Declaration of Independence. “Thomas Jefferson didn’t,” he said often in early speeches, alluding to the fact that the Declaration’s author and the third U.S. president owned slaves.

Still, Biden isn't immune from the kind of internal party tensions that cost Clinton progressive support in 2016, and he's spent the last three months shoring up his left flank.

Biden and Sanders created policy groups to write recommendations for Democrats’ 2020 platform. Those committees unveiled 110 pages of policy plans Wednesday, ahead of Biden’s speech in Pennsylvania. They left Biden short of endorsing single-payer health insurance and the most aggressive timelines to achieve a carbon-neutral economy, but ratified his claims of a more progressive slate than his predecessors'.

“I think our job is really to sometimes push him,” Washington Rep. Pramila Jayapal said. Jayapal, who helped lead the Biden-Sanders health care task force, said that means being “alongside him, of course, and then sometimes be out in front.”

Likewise, Varshini Prakash of the Sunrise Movement, a leading environmental advocacy group, said her group won't abandon the Green New Deal. But she credited Biden for embracing a level of public investment that would remake the energy economy during the pandemic recession.

“I don’t consider Biden’s proposals a political hat tip to progressives as much as rising to the moment we’re living in,” said Adam Green, co-founder of the Progressive Change Campaign Committee and a Warren ally.

The former vice president also has amassed an impressive slate of endorsements and built a stable of regular campaign surrogates, including all his major primary rivals. Many of them held events in the hours and days following his speech Thursday in a show of force that Trump, even with his intense online presence and fervent base, would be hard-pressed to match.

For his part, Trump accused Biden of “plagiarizing” his economic populism but also tarred Biden as a leftist who can’t win.

“It’s a plan that is very radical left, but he said the right things because he’s copying what I’ve done,” Trump said Friday before departing the White House for Florida.

Kaufman said Biden will continue campaigning as a nominee unconcerned about such labels. “What’s allowed him to survive all these years,” Kaufman said, “is that he’s not into any of those characterizations.”