Norwich became the first team to be relegated from the English Premier League on Saturday after Michail Antonio scored four goals for West Ham, which moved much closer to safety with Watford.

Antonio grabbed all the goals in West Ham's 4-0 win over Norwich. West Ham is 16th and six points clear of 18th-place Bournemouth in the relegation zone. Watford is level on points with West Ham after coming from 1-0 down to beat Newcastle 2-1.

Players wore black armbands as Premier League games this weekend started with a moment of silence as a tribute to World Cup winner Jack Charlton, who died on Friday aged 85. 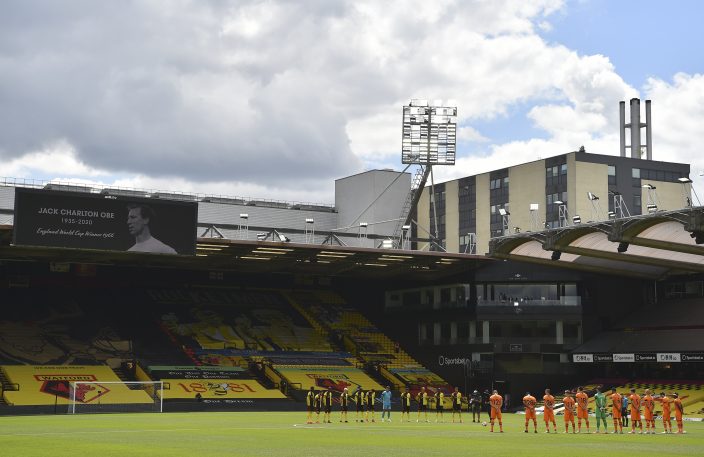 Players observe a minute of silence in memory of Jack Charlton prior to the start of the English Premier League soccer match between Watford and Newcastle at the Vicarage Road Stadium in Watford, England, Saturday, July 11, 2020. (Justin SetterfieldPool via AP)

Norwich is in last place with a 13-point gap to Watford in 17th and a maximum nine points on offer in the three remaining games.

Set pieces have been a regular source of hurt for Norwich and that was the case again on Saturday. Antonio's first goal was a close-range finish at a corner and his second a header from Mark Noble's free kick. Antonio headed the third on the rebound when his shot was saved by Tim Krul on the break.

Watford captain Troy Deeney scored two second-half penalties to give his team a valuable 2-1 win over Newcastle. Dwight Gayle put Newcastle ahead in the 23rd minute but defensive errors proved costly for Newcastle after the break. Matt Ritchie gave away one penalty for Deeney to score in the 52nd and Javier Manquillo gave up another with a foul on Ismaila Sarr.

United, Chelsea into CL; Bournemouth, Watford down from EPL