Captain Steven Stamkos will be limited at the start of Tampa Bay Lightning training camp because of a new lower-body injury.

General manager Julien BriseBois said Saturday that Stamkos fully recovered from core muscle surgery in early March but was injured again during voluntary workouts. Stamkos is expected to be ready for the start of the NHL's expanded 24-team Stanley Cup playoffs in early August. 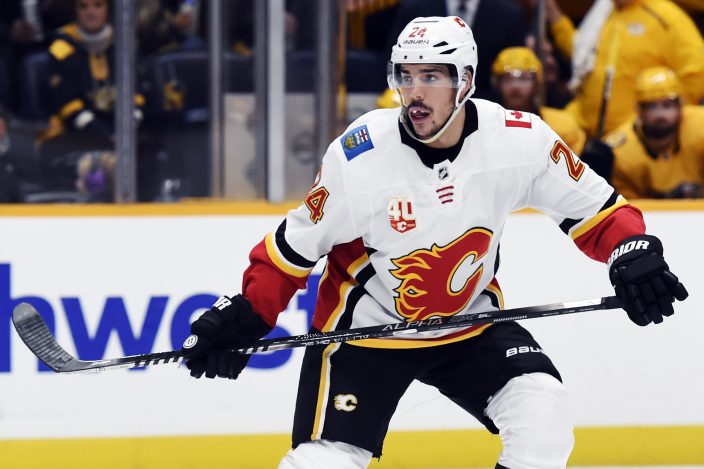 FILE - In this Oct. 31, 2019, file photo, Calgary Flames defenseman Travis Hamonic (24) plays against the Nashville Predators during the first period of an NHL hockey game in Nashville, Tenn. The Flames won't have Hamonic for the resumption of the hockey season after he decided to opt out for family reasons. Hamonic on Friday night, July 10, 2020, became the first player to publicly choose not to play in light of the COVID-19 pandemic. (AP PhotoMark Zaleski, File)

Unlike Stamkos, the Calgary Flames won't have defenseman Travis Hamonic for the resumption of the hockey season after he decided to opt out for family reasons. Hamonic on Friday night became the first player to publicly choose not to play in light of the COVID-19 pandemic.

Hamonic's daughter was hospitalized last year with respiratory issues, and he and his wife also have a baby boy. Their health concerns, not the soon-to-be 30-year-old's impending free agency, led him to opt out.

“I wish I could lace up my skates and be out there battling, blocking a shot and helping my team win, but my family has and always will come first,” Hamonic said. “Being my little kids’ dad every day is the most important job I have. I love this game and by team. This is a decision that is extremely hard for me to make."

Flames general manager Brad Treliving said, “While we will miss Travis in our lineup, we understand and respect his decision.”

The Lightning already got a pandemic scare when three players and additional staff tested positive for the novel coronavirus last month. The positive test results forced the team to close its facilities for a brief period of time.

Wizards' Beal not playing rest of NBA season due to injury