Derek Shelton needs his freedom. Maybe now more than ever. Fortunately for the first-year Pittsburgh Pirates manager, bench coach Donnie Kelly made it a point to provide it.

Each day Kelly puts together a meticulous schedule designed to find a way for separate groups of players to get their work in during the most unusual training camp in major league history. Shelton's name isn't on it. While Shelton jokes it's because Kelly doesn't want him to “screw anything up,” the truth is Shelton's omission is Kelly's way of doing his boss a favor.

Rather than be tied to being in a certain place at a certain time, Shelton instead can float from spot to spot as he tries to play catch up on the kind of relationship building that was supposed to happen organically during the languid days of spring training. 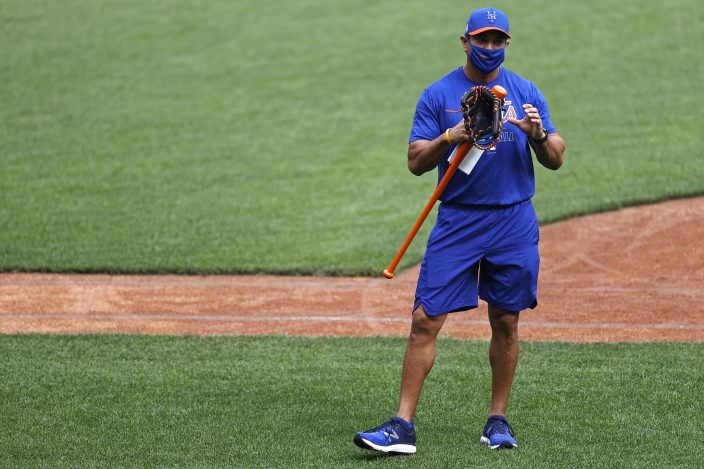 FILE - In this Friday, July 3, 2020, file photo, New York Mets manager Luis Rojas speaks during a baseball workout at Citi Field in New York. Rojas and other first-year managers are scrambling to make up for lost time. The rookie skippers are getting creative when it comes to getting a feel for their players during a season unlike any other. (AP PhotoAdam Hunger, File)

When Major League Baseball shut down for three-plus months in mid-March due to the COVID-19 pandemic, it forced Shelton and his fellow rookie managers to get creative when it came to forging the bonds necessary to become something more than a team in name only.

It's a path David Ross of the Cubs, Luis Rojas of the Mets and Jayce Tingler of the Padres are all trying to figure out.

Shelton would crash weekly Zoom meetings with the starting rotation each Wednesday, laughingly suggesting he did it to give him an excuse to get out of teaching his daughter fourth-grade math. He'd touch base frequently over the phone. Still, it's not the same as being together physically. That's what makes Shelton's informal roaming so important, particularly during a year unlike any other. 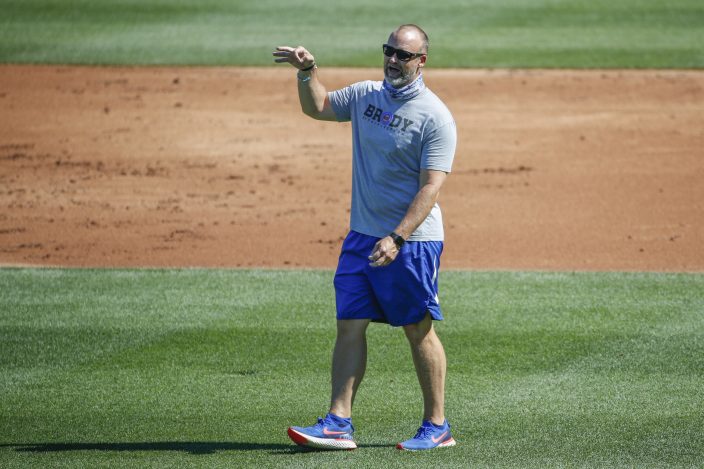 FILE - In this Friday, July 3, 2020, file photo, Chicago Cubs manager David Ross gestures during baseball practice at Wrigley Field in Chicago. Ross and other first-year managers are scrambling to make up for lost time. The rookie skippers are getting creative when it comes to getting a feel for their players during a season unlike any other. (AP PhotoKamil Krzaczynski, File)

There's the ongoing fight with the spread of the coronavirus, the heightened sensitivity to social justice in the wake of the death of George Floyd while in police custody. And the undercurrent of a looming labor fight between players and owners and a slew of rule changes.

Navigating a way forward given the current environment is tough enough for established managers, let alone guys who are still finding their footing in their new gig. The decidedly laid back, '90s alternative rock-loving Shelton presses on by focusing on empathy.

“I just (want) to make sure that I’m talking to them, I’m aware of what they’re going through,” Shelton said. “It’s not just baseball stuff, because we’re dealing with a lot more than baseball stuff right now. You want to make sure that their families are OK. If their wives or kids are here, how they feel. How they’re dealing with getting testing. It’s just general conversations, communication. But try to at least get in front of everybody during the day.” 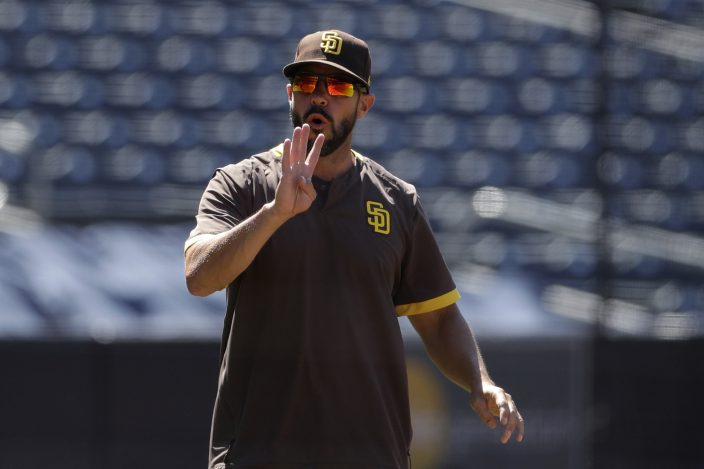 FILE - In this Friday, July 3, 2020, file photo, San Diego Padres manager Jayce Tingler reacts during baseball training at Petco Park in San Diego. Tingler and other first-year managers are scrambling to make up for lost time. The rookie skippers are getting creative when it comes to getting a feel for their players during a season unlike any other. (AP PhotoGregory Bull, File)

Tingler made it a point to visit as many of his San Diego players as possible during the offseason. The 39-year-old even threw himself into a workout with star shortstop Manny Machado, tweaking a hamstring in the process. He caught a bit of a break when many of the Padres got together informally before the season officially restarted.

“Just getting to connect with people and seeing them work on a daily basis has been a blessing,” Tingler said. “Usually you get into the season and it’s a complete whirlwind.”

The whirlwind started in January for Rojas, who was abruptly promoted by New York less than a month before spring training started after the Mets fired Carlos Beltran for his role in the Houston Astros stealing scandal. While Rojas had plenty of institutional knowledge thanks to a long history of managing in the team's farm system before joining the big league club last year as a quality control coach, the shift in responsibilities left him scrambling.

The 38-year-old Rojas — the youngest manager in the majors — read a book by Duke basketball coach Mike Krzyzewski to help him prepare. His message for a team that expects to contend this season? I'm here for you at all times.

“That’s one of my great values that I tell the guys: We have to overcommunicate,” said Rojas, who can always call dad — former player and manager Felipe Alou — for advice in a pinch. “I mean, we call it that. Just to make sure that everyone knows what’s going on and everyone knows what their role is and how things are and what to expect.”

Even if that's easier said than done during a time when players have to abide by 100-plus pages of health protocol and spit copious amounts of saliva into a tube every other day as part of the COVID-19 test. Managers in 2020 find themselves equal parts instructor, confidant and amateur medical professional. Oh, and they have to find a way to be successful on the field in the process.

If there's a saving grace for the newcomers, it's that their more-established brethren are facing some of the same concerns for the first time. Cleveland's Terry Francona might have two World Series rings at home and nearly two decades on the bench under his belt, but he doesn't have a playbook on how to cope with the fallout of a pandemic.

Same for several big-name managers in new spots for the first time, with the Angels' Joe Maddon, the Phillies' Joe Girardi and the Royals' Mike Matheny among them.

“I think every manager right now has that same challenge, obviously to get the team prepared and to fulfill protocol, keep everyone healthy is the No. 1 priority,” Rojas said.

Still, the playing field isn't quite level for all first-year managers. Ross earned the nickname “Grandpa Rossy” for helping the young Cubs capture their first championship in 108 years in 2016. Much of the core of that team — third baseman Kris Bryant and first baseman Anthony Rizzo chief among them — remains on the Northside, providing Ross with plenty of clout in the clubhouse the moment he became Chicago's manager last October.

“Having a little bit of background just eliminates some of the relationship stuff that you have to build when you don’t know somebody,” Ross said. “Some of the guys I’m new with, checking in a little bit more, beginning to know their personalities. I have to put a little more time into understanding how they think, their emotions when they’re good (and) when they’re bad and some of their history and talk to them before you give them some kind of hard truths that you might want to give them.”

Those hard truths will become evident soon enough. As camp — even one as unprecedented as this — settles into a familiar rhythm, a sense of normalcy is returning. The “culture” each is trying to establish will follow, even if it's a little later than usual.

“To say that we were going to start February 15th and the culture was going to be created or May 1st of this year, regardless of if we played games, or July 3rd, there was going to be a culture we wanted (isn't true),” Shelton said. "It’s something that’s going to continue to grow, but I’m really happy with the foundation that we’re starting to build.”