After months in which Brazilian President Jair Bolsonaro downplayed COVID-19 by flouting social distancing recommendations and mostly shunning masks, both coronavirus precautions became part of his cloistered life this week at the official residence in capital Brasilia.

Bolsonaro, 65, announced on Tuesday that he tested positive for the virus and had experienced fever, aches and malaise. He scrapped a trip he had planned to northeastern Piauí state, and all his meetings for the week were converted to video calls.

One was with former congressman Roberto Jefferson, president of the conservative PTB party. Jefferson told The Associated Press that he went to the presidential Planalto Palace and sat in front of a large television where he could see Bolsonaro in a makeshift office at his residence. 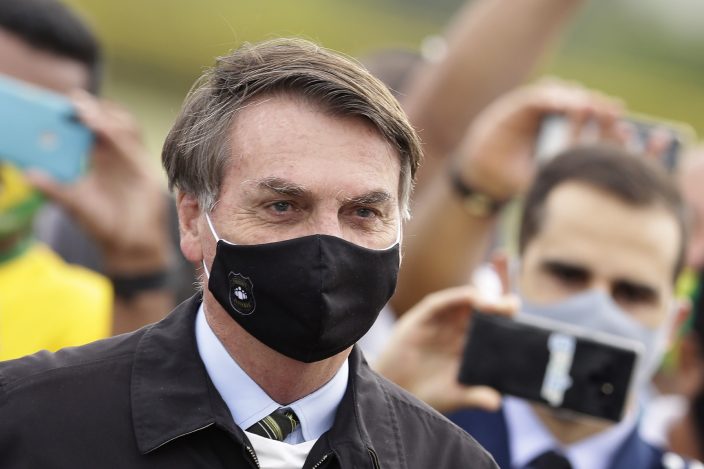 FILE - In this May 25, 2020, file photo, Brazil's President Jair Bolsonaro, wearing a face mask amid the coronavirus pandemic, stands among supporters as he leaves his official residence of Alvorada palace in Brasilia, Brazil. Bolsonaro said Tuesday, July 7, he tested positive for COVID-19 after months of downplaying the virus's severity while deaths mounted rapidly inside the country. (AP PhotoEraldo Peres, File)

“I found the president well, flushed, willing. In very good health,” Jefferson said Saturday. “I only saw him cough once, when I made a joke.”

Since his diagnosis, Bolsonaro has held virtual meetings almost every day with Jorge Oliveira, secretary-general of government, to sign official documents. According to Oliveira’s office, a protocol was created so work could be carried out digitally.

This was also how Bolsonaro interviewed candidates to head the education ministry, he said on Facebook on Thursday. The following day, he named to the post Milton Ribeiro, a former deputy dean of Mackenzie University in Sao Paulo who preaches at a Presbyterian church in Santos, outside the metropolis. 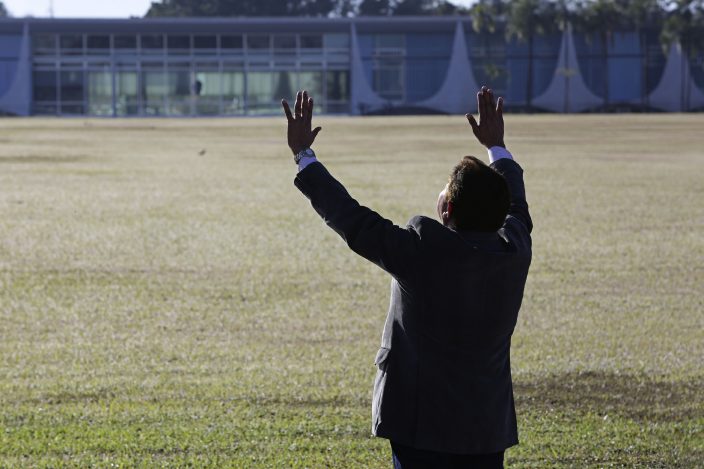 Only a few aides who were previously infected by the new coronavirus could get close to Bolsonaro during the week, one of them said on Tuesday. The person declined to be named, citing lack of authorization to speak with journalists. Bolsonaro also spent some time in the afternoons in front of the palace with photojournalists 400 yards away, on the other side of a garden. He had met his supporters by that garden until his diagnosis, but no longer.

The new routine marks a stark change for Bolsonaro, who spent months attending rallies with his fans, heading out to bakeries and food trucks to mix and mingle. He sometimes declined to wear a mask. He has scoffed at the restrictions mayors and governors implemented to contain the spread of the virus, arguing their economic impacts would cause more suffering than the virus, which he repeatedly called “a little flu.”

Bolsonaro took hydroxychloroquine pills for five days, Monday through Friday, according to a member of the presidential medical team who asked to not be identified, citing patient confidentiality and because the person isn’t authorized to speak publicly. The drug has no proven effect on the treatment of COVID-19 and can cause side effects such as cardiac arrhythmia, according to medical studies. As a result, Bolsonaro was subjected to electrocardiograms and blood tests, the person said.

Brazil’s presidential press office said in a statement that the president has experienced no medical problems with his treatment.

The aide who spoke on condition of anonymity said Bolsonaro slept in a different bedroom to keep the first lady, Michelle Bolsonaro, safe. He lives with her, his daughter and step-daughter.

On Saturday, the first lady shared a photo of her COVID-19 test results showing she was not infected.

On Thursday, Jair Bolsonaro held his weekly live broadcast on Facebook. This time, he was not accompanied by a minister or a sign language interpreter, as usual. Despite saying he felt well, he said he should still be isolated next week, so as to avoid contaminating anyone.

“I’m sorry I can’t interact with you here. Not even next week will it be possible, because I think I will not yet be completely free of the virus, so I will not have anyone on my side here,” Bolsonaro said on the broadcast.

During the broadcast, he wasn’t wearing a mask. But the aide said Bolsonaro now regularly wears the equipment to protect both his family and the more than 100 employees who work at the residence.