President Donald Trump’s intervention into a criminal case connected to his own conduct drew fierce rebukes Saturday from Democrats and a few lonely Republicans, with calls for investigations and legislation.

But it remained to be seen if Trump’s most recent defiance of the conventions of his office to commute the sentence of political confidant Roger Stone, just four months before Election Day, would matter to voters grappling with a deadly COVID-19 surge and a national discourse on racial justice.

Shortly before heading out Saturday morning for his Virginia golf club, Trump made unfounded accusations against his political foes while taking another swipe at special counsel Robert Mueller’s investigation, which led to convictions for six Trump aides or advisers, including Stone, a larger-than-life political character who embraced his reputation as a dirty trickster. 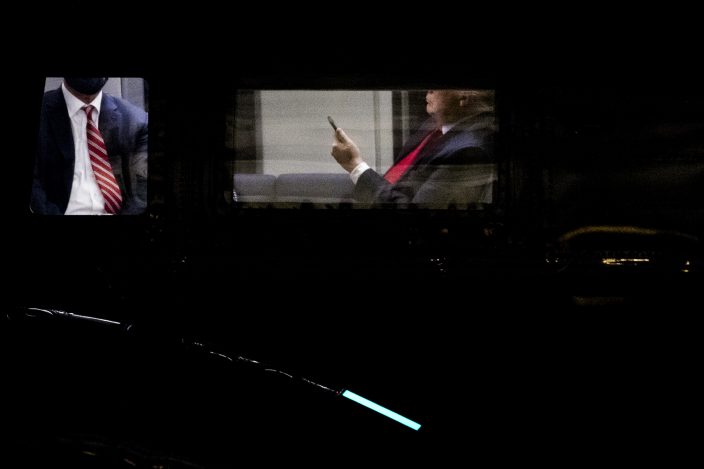 President Donald Trump looks at a smartphone while sitting aboard Marine One as it lands on the South Lawn of the White House in Washington, Friday, July 10, 2020, after a trip to Florida. Trump commuted the sentence of his longtime political confidant Roger Stone on Friday, just days before Stone was set to report to prison. (AP PhotoAndrew Harnik)

“Roger Stone was targeted by an illegal Witch Hunt that never should have taken place,” Trump tweeted. “It is the other side that are criminals, including Biden and Obama, who spied on my campaign - AND GOT CAUGHT!”

Trump has long sought vengeance against the Russia investigation that helped define his first two years in office. And now that the coronavirus pandemic has imperiled his reelection chances by crushing the economy and sending his poll numbers sliding, he has taken to testing the limits of his power in order to reward loyalty and fire up his conservative base.

The decision to commute the sentence of the 67-year-old Stone, who was convicted of lying to help the president and set to report to prison on Tuesday, was loudly celebrated by some in Trump’s orbit as a triumph over deep state prosecutorial overreach.

But the move announced Friday evening came over the advice of a number of the president’s senior advisers, who warned him it would be politically self-destructive to reward Stone for his silence. Trump had long floated the idea of clemency for Stone — as well as for other associates in legal trouble, including his former national security adviser Michael Flynn and campaign chairman Paul Manafort — which itself was viewed by some as witness tampering by encouraging them not to cooperate with prosecutors.

The reaction from Democrats was swift and furious.

House Speaker Nancy Pelosi on Saturday called it “an act of staggering corruption,” saying legislation is needed to prevent a president from pardoning or commuting the sentence of someone who acted to shield that president from prosecution. House Intelligence Committee Chair Adam Schiff called it “offensive to the rule of law and principles of justice.”

And Trump's Democratic challenger, Joe Biden, resurfaced a 2019 tweet in which he said that “Trump has surrounded himself with people who flout our laws — we shouldn’t be surprised that he thinks he is above the law.” He added: “Still true.”

Republicans largely stayed silent on the issue Saturday, reluctant again to challenge a president who remains very popular with rank-and-file GOP voters. But one loud voice was Utah Sen. Mitt Romney, who was also the lone GOP senator to vote to convict the president during his impeachment trial earlier this year.

“Unprecedented, historic corruption: an American president commutes the sentence of a person convicted by a jury of lying to shield that very president,” he tweeted Saturday.

And Mark Sanford, the former congressman who made a short-lived primary challenge to Trump, wrote: “So much for the Republican Party being the party of law and order. Have we not lost our minds in not condemning as a party the president’s corruption by Roger Stone.”

But most of Republicans who did speak out about the decision supported it. Sen. Lindsey Graham, a Trump confidant, said Stone was convicted of a “nonviolent, first-time offense” and the president was “justified” in commuting the sentence.

Advisers who had previously talked Trump out of acting on Stone’s behalf awaited the possible fallout, but they considered that Congress may be too consumed with virus relief packages while wondering if the electorate long ago tuned out any talk of the complicated Russia investigation, particularly during a pandemic.

But Trump likely could not afford more political damage. He is decidedly trailing Biden, per his campaign’s own private admissions, and his effort to reboot his reelection bid took another blow when his planned rally Saturday night in New Hampshire was postponed. Campaign officials had deeply worried about low turnout. While an impending storm was blamed for the cancellation, sunny skies were seen in Portsmouth an hour before the president had been due to arrive.

By commuting Stone's sentence, Trump evoked other controversial acts of clemency by his predecessors, though his was done in the height of an election year.

President George H. W. Bush pardoned former Defense Secretary Caspar Weinberger on Christmas Eve 1992, six weeks after he was defeated for reelection, prompting an uproar from Democrats and the independent counsel investigating the Iran-Contra affair. And President Bill Clinton waited until his final hours in office in 2001 to issue a raft of pardons, including of financier Marc Rich.

But one president who resisted the use of pardon was Richard Nixon, who privately discussed acts of clemency but never followed through even as many of his associates faced legal trouble during the Watergate scandal.

A few months after resigning, Nixon himself received a pardon from his successor Gerald Ford.

Stone, a former Nixon aide, told the AP he expressed his gratitude to Trump in a phone call.

“You know, he has a great sense of fairness,” Stone said. “We’ve been friends for many, many years, and he understands that I was targeted strictly for political reasons.”