Mars is about to be invaded by planet Earth — big time.

Three countries — the United States, China and the United Arab Emirates — are sending unmanned spacecraft to the red planet in quick succession beginning this week, in the most sweeping effort yet to seek signs of ancient microscopic life while scouting out the place for future astronauts.

The U.S., for its part, is dispatching a six-wheeled rover the size of a car, named Perseverance, to collect rock samples that will be brought back to Earth for analysis in about a decade. 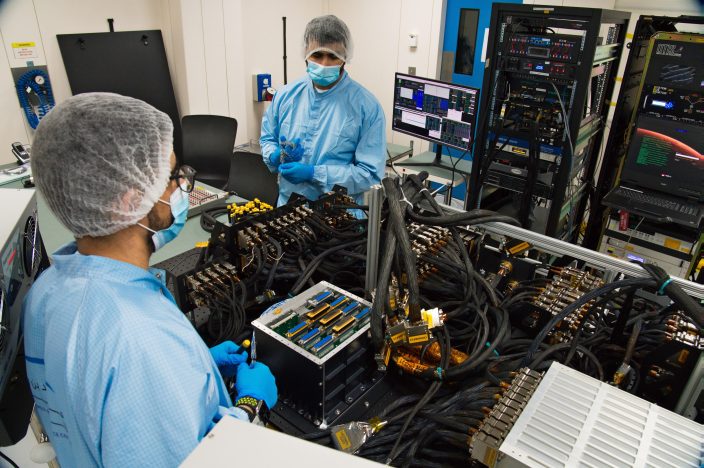 Mahmood al-Nasser, left, and Mohammad Nasser al-Emadi, center, test the Emirates Mars Mission probe's "flat sat" at the Mohammed bin Rashid Space Center in Dubai, United Arab Emirates on Thursday, June 25, 2020. The spacecraft, named Amal, which is Arabic for Hope, is an orbiter scheduled to launch from Japan in July 2020, on what will be the Arab world’s first interplanetary mission. It is scheduled to arrive at Mars in 2021, the year the UAE marks the 50th anniversary of its founding. (AP PhotoJon Gambrell)

“Right now, more than ever, that name is so important,” NASA Administrator Jim Bridenstine said as preparations went on amid the coronavirus outbreak, which will keep the launch guest list to a minimum.

Each spacecraft will travel more than 300 million miles (483 million kilometers) before reaching Mars next February. It takes six to seven months, at the minimum, for a spacecraft to loop out beyond Earth's orbit and sync up with Mars' more distant orbit around the sun.

Scientists want to know what Mars was like billions of years ago when it had rivers, lakes and oceans that may have allowed simple, tiny organisms to flourish before the planet morphed into the barren, wintry desert world it is today. 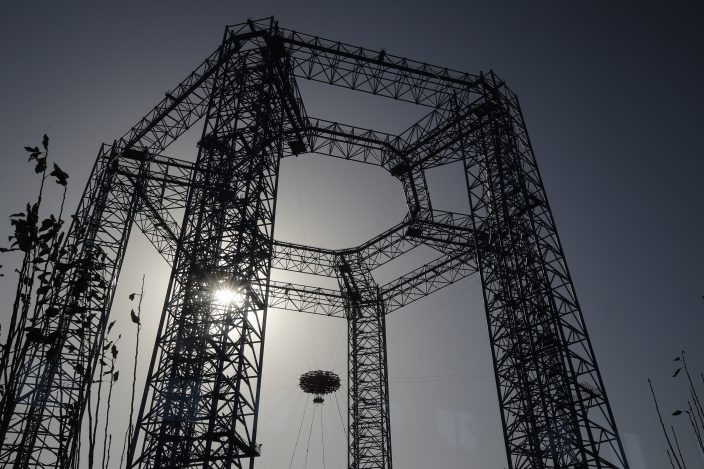 FILE - In this Thursday, Nov. 14, 2019 file photo, a Mars lander is lifted during a test for its hovering, obstacle avoidance and deceleration capabilities at a facility at Huailai in China's Hebei province. The site outside Beijing simulated conditions on the red planet, where the pull of gravity is about one-third that of Earth. China will launch their Mars rover and an orbiter sometime around July 23, 2020, in a mission named Tianwen, or Questions for Heaven. (AP PhotoAndy Wong)

“Trying to confirm that life existed on another planet, it’s a tall order. It has a very high burden of proof,” said Perseverance’s project scientist, Ken Farley of Caltech in Pasadena, California.

The three nearly simultaneous launches are no coincidence: The timing is dictated by the opening of a one-month window in which Mars and Earth are in ideal alignment on the same side of the sun, which minimizes travel time and fuel use. Such a window opens only once every 26 months.

Mars has long exerted a powerful hold on the imagination but has proved to be the graveyard for numerous missions. Spacecraft have blown up, burned up or crash-landed, with the casualty rate over the decades exceeding 50%. China's last attempt, in collaboration with Russia in 2011, ended in failure. 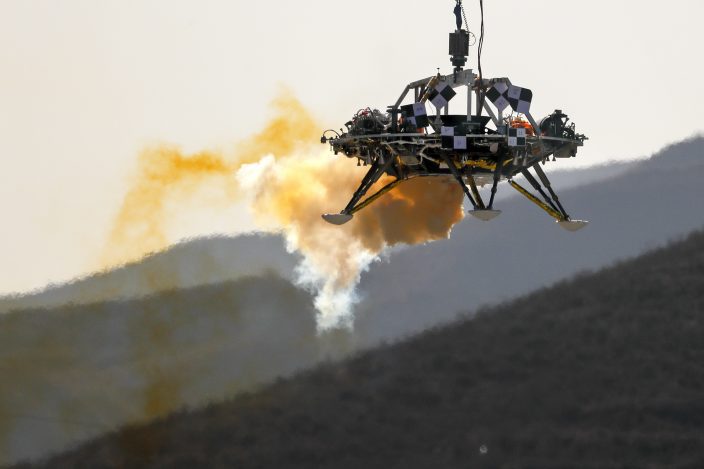 FILE - In this Thursday, Nov. 14, 2019 file photo, the Mars lander's hovering, obstacle avoidance and deceleration capabilities are tested at a facility at Huailai in China's Hebei province. China will launch their Mars rover and an orbiter sometime around July 23, 2020, in a mission named Tianwen, or Questions for Heaven. (AP PhotoAndy Wong)

Only the U.S. has successfully put a spacecraft on Mars, doing it eight times, beginning with the twin Vikings in 1976. Two NASA landers are now operating there, InSight and Curiosity. Six other spacecraft are exploring the planet from orbit: three U.S., two European and one from India.

The United Arab Emirates and China are looking to join the elite club.

The UAE spacecraft, named Amal, which is Arabic for Hope, is an orbiter scheduled to rocket away from Japan on Wednesday, local time, on what will be the Arab world’s first interplanetary mission. The spacecraft, built in partnership with the University of Colorado Boulder, will arrive at Mars in the year the UAE marks the 50th anniversary of its founding. 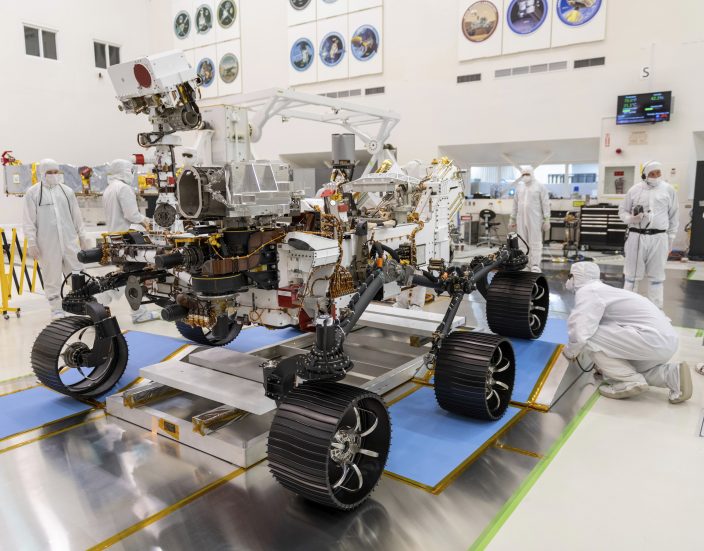 FILE - In this Dec. 17, 2019 photo made available by NASA, engineers monitor a driving test for the Mars rover Perseverance in a clean room at the Jet Propulsion Laboratory in Pasadena, Calif. The robotic vehicle, scheduled to launch on July 30, 2020, is planned to touch down in an ancient river delta and lake known as Jezero Crater, not quite as big as Florida’s Lake Okeechobee. (J. KrohnNASA via AP, File)

“The UAE wanted to send a very strong message to the Arab youth,” project manager Omran Sharaf said. “The message here is that if the UAE can reach Mars in less than 50 years, then you can do much more. ... The nice thing about space, it sets the standards really high."

Controlled from Dubai, the celestial weather station will strive for an exceptionally high Martian orbit of 13,670 miles by 27,340 miles (22,000 kilometers by 44,000 kilometers) to study the upper atmosphere and monitor climate change.

China will be up next, with the flight of a rover and an orbiter sometime around July 23; Chinese officials aren’t divulging much. The mission is named Tianwen, or Questions for Heaven. 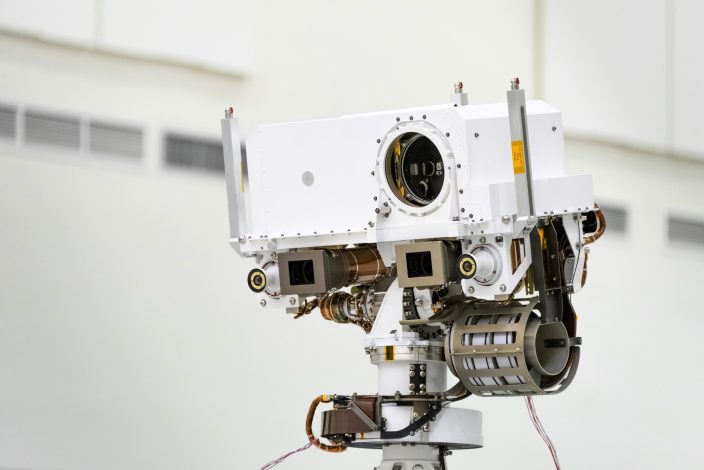 This July 23, 2019 photo made available by NASA shows the head of the Mars rover Perseverance's remote sensing mast which contains the SuperCam instrument in the large circular opening, two Mastcam-Z imagers in gray boxes, and next to those, the rover's two navigation cameras, at the Jet Propulsion Laboratory in Pasadena, Calif. The robotic vehicle will hunt for rocks containing biological signatures, if they exist. (NASAJPL-Caltech via AP)

NASA, meanwhile, is shooting for a launch on July 30 from Cape Canaveral.

Perseverance is set to touch down in an ancient river delta and lake known as Jezero Crater, not quite as big as Florida’s Lake Okeechobee. China’s much smaller rover will aim for an easier, flatter target.

To reach the surface, both spacecraft will have to plunge through Mars' hazy red skies in what has been dubbed “seven minutes of terror” — the most difficult and riskiest part of putting spacecraft on the planet.

Jezero Crater is full of boulders, cliffs, sand dunes and depressions, any one of which could end Perseverance’s mission. Brand-new guidance and parachute-triggering technology will help steer the craft away from hazards. Ground controllers will be helpless, given the 10 minutes it takes radio transmissions to travel one-way between Earth and Mars.

Jezero Crater is worth the risks, according to scientists who chose it over 60 other potential sites.

Where there was water — and Jezero was apparently flush with it 3.5 billion years ago — there may have been life, though it was probably only simple microbial life, existing perhaps in a slimy film at the bottom of the crater. But those microbes may have left telltale marks in the sediment layers.

Perseverance will hunt for rocks containing such biological signatures, if they exist.

It will drill into the most promising rocks and store a half-kilogram (about 1 pound) of samples in dozens of titanium tubes that will eventually be fetched by another rover. To prevent Earth microbes from contaminating the samples, the tubes are super-sterilized, guaranteed germ-free by Adam Stelzner, chief engineer for the mission at NASA's Jet Propulsion Laboratory in Pasadena.

“Yep, I’m staking my reputation on it,” he said.

While prowling the surface, Perseverance as well as China’s rover will peek below, using radar to locate any underground pools of water that might exist. Perseverance will also release a spindly, 4-pound (1.8-kilogram) helicopter that will be the first rotorcraft ever to fly on another planet.

Perseverance's cameras will shoot color video of the rover’s descent, providing humanity’s first look at a parachute billowing open at Mars, while microphones capture the sounds.

The rover will also attempt to produce oxygen from the carbon dioxide in the thin Martian atmosphere. Extracted oxygen could someday be used by astronauts on Mars for breathing as well as for making rocket propellant.

NASA wants to return astronauts to the moon by 2024 and send them from there to Mars in the 2030s. To that end, the space agency is sending samples of spacesuit material with Perseverance to see how they stand up against the harsh Martian environment.

The tab for Perseverance’s mission, including the flight and a minimum two years of Mars operations, is close to $3 billion. The UAE's project costs $200 million, including the launch but not mission operations. China has not disclosed its costs. Europe and Russia dropped plans to send a life-seeking rover to Mars this summer after falling behind in testing and then getting slammed by COVID-19.

Perseverance's mission is seen by NASA as a comparatively low-risk way of testing out some of the technology that will be needed to send humans to the red planet and bring them home safely.

“Sort of crazy for me to call it low risk because there’s a lot of hard work in it and there are billions of dollars in it," Farley said. “But compared to humans, if something goes wrong, you will be very glad you tested it out on a half-kilogram of rock instead of on the astronauts.”

NFL partners with three organizations to get out the vo ...

The NFL is partnering with three n ...